Although trans monoenoic fatty acids are not formed to a significant extent during frying, they are still encountered in some oils used for frying or cooking in general. Trans-monounsaturated fatty acids have a double origin: natural, because they are found in ruminant milk and meat due to the biohydrogenation process in the rumen, and in this case the major isomer the 11t-18:1 represents over 60% of the total isomer mixture (Fig. 1). They are also formed during technological treatments such as partial catalytic hydrogenation. The content and distribution of the trans isomers depend on the hydrogenation parameters, i.e. the type of catalyst, temperature, agitation and hydrogen pressure. In this case the double bond is more delocalized along the carbon chain. The major isomers are the 8t-, 9t-, 10t-, 11t-, and 12t-18:1 (Fig. 1).

This short discussion of the metabolism and biological effects of the trans fatty acids present in partially hydrogenated oils and extensively used as a frying medium is based upon more comprehensive recent reviews [1,2], which should be consulted by those who require further details. Furthermore, because of the large amount of data published in this research field, focus here will be upon the most recent and relevant papers dealing with human epidemiological and intervention studies. Apologies to the authors of innumerable papers, especially dealing with animal feeding studies, who will not be cited here. 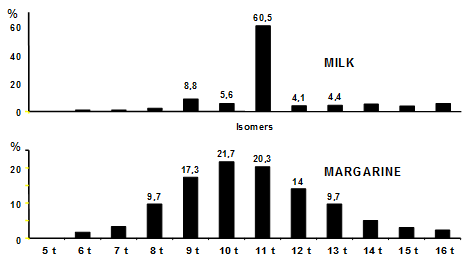 In general, there is ample evidence to suggest that nearly all isomeric cis and trans monoenoic C18 fatty acids in ruminant fats and partially hydrogenated vegetable oils, when fed as part of a mixed diet, are efficiently absorbed and incorporated into chylomicrons with the possible exceptions of fatty acids with double bonds in the Δ2 to Δ7 positions. Once they reach the liver, chylomicron remnant triacylglycerols are taken up, repackaged and exported into the circulation in the form of very-low density and low-density lipoproteins. However, the experimental evidence suggests that there is little or no discrimination between isomers of cis and trans monoenes in the process of triacylglycerol synthesis [1,3]. Following incorporation into lipoprotein fractions, triacylglycerols are transported to the peripheral tissues, where they are hydrolysed by the enzyme lipoprotein lipase and taken up into cells. In plasma, fatty acids in position 2 of phosphatidylcholine are transferred to cholesterol to form cholesterol esters by the enzyme lecithin:cholesterol acyl transferase, which discriminates strongly against trans-monoenes in comparison to the corresponding cis isomers [4].

There is no evidence of discrimination between cis and trans monoenes in the uptake of fatty acids by tissues. Much of the trans fatty acids are found in triacylglycerols in tissues in proportions similar to those fed, with somewhat less in phospholipids, especially in liver, kidney, testes, heart and adipose tissue. Very little trans fatty acid is found in testes or the brain. With the exception of the adrenals, cholesterol esters tend to have the lowest concentrations of trans fatty acids. Amongst the main glycerophospholipid classes, there is least trans monoene incorporation in phosphatidylcholine, and like the saturated fatty acids trans monoenes tend to be concentrated in the primary positions in contrast to cis monoenes. These results are consistent with data obtained in experiments in vitro, as the position and configuration of the double bond in monoenoic fatty acids has little effect on conversion to coenzyme A esters, although trans-octadecenoyl coenzyme esters were shown to be good substrates for acyl-CoA:phospholipid acyltransferases with microsomal preparations with most incorporated into position 1 preferentially (see the reviews [1,3]).

Both chain elongation and chain shortening of trans monoenes are observed, while vaccenic acid (11t-18:1) is desaturated to the conjugated isomer 9-cis,11-trans-18:2 in tissues with potential health benefits. Similarly 7-trans-18:1 can be converted to 7-trans,9-cis-18:2 (reviewed by Chardigny et al. [5]). Early studies demonstrated that oleic, elaidic and palmitic acids were catabolized at similar rates in rats as measured by the respiratory CO2, although experiments in vitro with mitochondrial preparations from rat heart suggested that elaidic acid was oxidized more slowly than oleic acid, a finding that was attributed to the fact that part of the normal mechanism of beta-oxidation involves a cis-3-12:1 intermediate, which is isomerized prior to the next step. In contrast, rat liver peroxisomes in vitro have a distinct preference for the oxidation of trans in comparison to cis fatty acids. For example, a recent study demonstrated that the rate of peroxisomal oxidation of elaidic acid was about 2.5-fold greater than that of oleic acid [6].

Although cis and trans monoenoic fatty acids appear to have differing effects on desaturation of fatty acids of the n-6 and n-3 families, the effects are small in rats on normal diets. Data obtained in vitro with incubations with rat microsomes under conditions that reflected the physiological situation showed little effect on the desaturation of palmitic acid to palmitoleic (Δ9-desaturase), linoleic to γ-linolenic (Δ6-desaturase) and eicosa-8,11,14-trienoic to arachidonic acid (Δ5-desaturase). However, marked inhibitory effects were observed with particular pure isomers [7].

It is obvious that these data have changed in recent years because of the reduction in concentration of trans fats in margarines and other derived products, and up-to-date data are needed. For example, the consumption of trans fatty acids in the United States fell from 10 g/d in 1984 to 4 g/d in 1995 [8]. In Denmark, it fell from approximately 2 g/d in 1992 to less than 0.5 g/d in 1999 [12]. It would therefore be necessary to evaluate the effect of process evolutions on the trans fatty acids content and profile of human tissues for each country, as observed in Canada [13].

Studies of biological effects published to date have mainly concerned the effect of the consumption of trans fatty acids on cardiovascular risk factors, particularly the effect of these on lipoprotein metabolism. Epidemiological studies established a long time ago that high plasma concentrations of total cholesterol (TC) and LDL cholesterol (C-LDL) and low concentrations of HDL cholesterol (C-HDL) were reliable cardiovascular risk markers. The data obtained to date on trans fatty acids are based on human intervention studies but also on epidemiological studies. In the early 1990s, clinical trials showed that consumption of trans fatty acids led to an increase in plasma cholesterol, particularly LDL, as did saturated fatty acids; but, unlike the latter, a fall in HDL cholesterol (C-HDL) was also observed in some cases. Consequently, trans fatty acids could be more atherogenic than saturated. However, a number of clinical trials used very high quantities of industrial trans fatty acids (11% of total energy), about 3 to 20 times more than the quantity normally consumed [14]. A meta-analysis performed in 2003 by Mensink et al. [15], involving 60 nutritional interventions, was used to evaluate the effects of different fatty acids, including trans fatty acids, on the total cholesterol/C-HDL ratio. In particular, it was shown that a 1% increase in trans fatty acid consumption (18:1 trans) at the expense of carbohydrates could lead to an increase in C-LDL of +0.040 mmol/L; on the other hand, the effect on C-HDL was found to be similar to that of carbohydrates. The estimated impact on the total cholesterol/C-HDL ratio was found to be +0.22 mmol/L. When carbohydrates were replaced by palmitic acid, considered to be hypercholesterolemic, the effects observed were identical to those obtained with trans monoenes relative to C-LDL.

Among the epidemiological prospective studies, a meta-analysis of four grouping about 140,000 volunteers and the analysis of more than 4000 events has shown that an increase of 2% in total energy intake of trans fatty acids increased the risk of cardiovascular disease by 23% [2]. The studies used for this analysis were the Nurses' Health Study with 20 years follow-up, the Health Professionals Follow-up study, the Alpha-Tocopherol Beta Carotene Cancer Prevention Study with 6 years follow-up, and finally the Zutphen Elderly Study with 10 years follow-up [16].

Amongst other effects, consumption of trans fatty acid may promote inflammation and dysfunction of the vascular endothelium. Data also suggest that trans fatty acids may exacerbate visceral adiposity and insulin resistance [17]. However, the biology of trans fatty acids is too emotive and controversial a subject to be reviewed briefly, and readers should consult the literature cited for more details.