In recent years the contribution of frying oils to total dietary energy intake has markedly increased in industrialized countries. This is mainly due to the rising consumption of deep-fried products, which are very popular because of their desirable flavor, color, and crispy texture.

Deep-frying is a process of immersing food in hot oil, which acts as a heat transfer medium and contributes to the texture and flavor of the fried food. During deep-frying several chemical reactions occur within the frying oil, including the thermal oxidation of unsaturated fatty acids (FA). In the course of thermal FA oxidation a heterogeneous mixture of chemically distinct substances is formed including hydroperoxy and hydroxy FA such as 13-hydroperoxyoctadecadienoic acid (13-HPODE), 9-hydroxy- and 13-hydroxyoctadecadienoic acid (9-HODE, 13-HODE) as well as cyclic FA monomers (CFAM). Large quantities of the frying oil containing these substances are absorbed into the fried food during deep-frying, and, therefore, ingested during their consumption. For instance, the fat contents of potato crisps, doughnuts, and French fries are 35-40%, 20-25%, and 10-15%, respectively. Based on these amounts of frying oils in fried foods and the frequent consumption of such foods in our population, the daily amount of frying oils consumed can be 50 g and more.

Feeding experiments using rats, mice, and pigs revealed that ingestion of frying oils, compared with fresh fats, provokes a wide array of biological effects in mammals including oxidative stress [1-4], impaired glucose tolerance [5], and thyroid function and lipid metabolism alterations [6-10]. At least some of these, in particular the alterations in lipid metabolism, are mediated by profound changes in gene expression. Recent studies clearly demonstrated that characteristic substances of frying oils such as 9-HODE, 13-HODE, and 13-HPODE as well as CFAM are potent ligands and activators of peroxisome proliferator-activated receptors (PPAR) [11-15]. These nuclear receptors, which include the three subtypes α, β/δ, and γ, are transcription factors that can be activated by FA and their metabolites (e.g. eicosanoids). However, the potency of different FA and FA metabolites to bind and activate PPAR varies greatly, and hydroxylated FA are stronger activators of PPAR than their respective nonhydroxylated counterparts. This probably explains why administration of fresh fats to animals causes only a weak activation of PPAR.

PPAR stimulate the expression of target genes by binding to specific DNA sequence elements, the so-called peroxisome proliferator response elements (PPRE), in and around (first intron) the promoter region of PPAR target genes as heterodimers with the 9-cis-retinoic acid receptor (RXR) after activation. However, PPAR also attenuate the expression of specific genes by inhibiting DNA-binding of several other transcription factors such as activator protein (AP)-1, signal transducers and activators of transcription (STAT)-1 and -3, nuclear factor-κB (NF-κB), and sterol regulatory-element binding proteins (SREBP) (Fig. 1). Through the activation of PPAR, components of frying oil are therefore capable of exhibiting both stimulatory and inhibitory effects on gene expression. 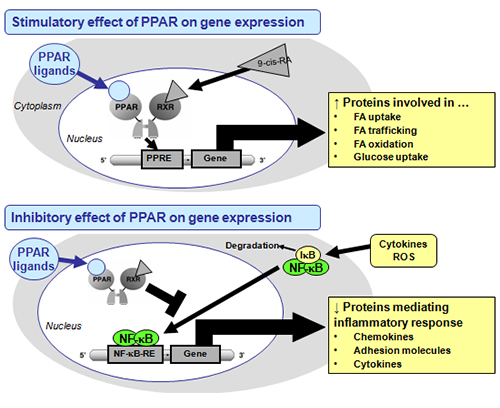 Figure 1. Schematic presentation of the mechanisms of action of PPAR on gene transcription. PPAR stimulate gene transcription by binding to specific DNA sequences, called PPRE, present in and around the promoter region of target genes, as activated PPAR/RXR heterodimers, thereby stimulating the expression of those genes. PPARs also negatively modulate gene transcription by inhibiting DNA-binding of several other transcription factors, such as NF-κB. Other abbreviations: 9-cis-RA, 9-cis-retinoic acid; IκB, inhibitor of NF-κB; ROS, reactive oxygen species.

The present review summarizes the current knowledge about biological effects of frying oils that are mediated by the activation of PPAR.

Although oxidized fats are widely considered to have detrimental effects on human health, feeding experiments in rats have consistently demonstrated that frying oils cause a reduction in the concentrations of triacylglycerols (TAG) and cholesterol in liver, plasma, and very-low-density lipoproteins (VLDL) [2,7,9,10,13]. Elevated plasma concentrations of both cholesterol and triacylglycerols are known risk factors for cardiovascular disorders such as atherosclerosis. This suggests that besides several undesirable effects frying oils also exert beneficial effects in the organism.

We and others have shown that administration of frying oils causes activation of hepatic PPARα [11-15], which is involved centrally in the regulation of lipid and lipoprotein metabolism. Since PPARα is highly expressed in tissues with high rates of FA oxidation such as liver, where it controls a comprehensive set of genes that regulate most aspects of FA catabolism (cellular FA uptake, intracellular FA transport, mitochondrial FA uptake, and FA oxidation), activation of PPARα results in decreased triacylglycerol concentrations in plasma, liver and VLDL. This suggests that activation of hepatic PPARα by frying oils is at least partially responsible for the triacylglycerol-lowering effect of frying oils.

Presumably, the PPARα activating property of frying oils also contributes to its preventive effect on alcoholic fatty liver development - a state in which hepatic FA catabolism is impaired owing to ethanol-induced blockade of PPARα function. Using a rodent model of alcoholic fatty liver it could be demonstrated that administration of a frying oil causes an activation of hepatic PPARα as evidenced by increased transcript levels of PPARα-regulated genes involved in FA catabolism in rat liver despite sustained feeding of ethanol [15]. This suggests that frying oil increases the capacity of the liver to oxidize FA and thus counteracts the elevated levels of triacylglycerols and the diminished PPARα function during ethanol-feeding.

Recent studies also revealed that rats treated with frying oil have increased hepatic transcript levels of the carnitine transporters novel organic cation transporter (OCTN) 1 and 2 and an increased hepatic carnitine concentration [16]. OCTN operate on the intestinal absorption and renal reabsorption of carnitine and play a major role in tissue distribution of carnitine by catalysing the uptake of carnitine into body cells. Due to its high binding affinity for carnitine and its wide expression, OCTN2 is the physiologically most important carnitine transporter, operating for the reabsorption of carnitine from the urine as well as playing a major role in tissue distribution. OCTN1 contributes less to carnitine transport than OCTN2 due to its low carnitine transport activity. Since OCTN are also up-regulated in the liver of rats and pigs treated with synthetic PPARα agonists [17-20], it has been postulated that these effects of frying oils are also mediated by PPARα activation. This postulation also provides an explanation for the increased hepatic carnitine concentrations observed during fasting. During this state, FA released from adipose tissue enter the liver, where they act as PPARα activators. Subsequently, many genes involved in β-oxidation of FA including carnitine palmitoyltransferases (CPT), which supply acetyl-CoA used for the generation of ATP via the citrate cycle and for the generation of ketone bodies, an important fuel for the brain during fasting, are up-regulated. CPT are rate-limiting for β-oxidation of FA, and up-regulation of CPT, which is essential for the metabolic adaptations occurring during fasting, might increase the demand for carnitine in liver cells. Therefore, up-regulation of OCTN by PPARα activation is probably a means to supply liver cells with sufficient carnitine required for transport of excessive amounts of FA into the mitochondrion, and therefore plays an important role in the adaptive response of liver metabolism to fasting (Fig. 2).

Figure 2. Proposed mechanism of action of PPARα activation by components of frying oil on cellular carnitine uptake in the hepatocyte. Activation of PPARα by characteristic substances of frying oil such as 9-HODE, 13-HODE, and 13-HPODE as well as CFAM causes up-regulation of a comprehensive set of genes involved in FA catabolism including mitochondrial β-oxidation of FA (e.g. CPT I, CPT II). Up-regulation of these genes is mediated by binding of activated PPARα/RXR heterodimers to PPRE present in and around the promoter of those genes. Consequently, in the liver, where PPARα is most abundant, β-oxidation is dramatically increased as a consequence of the increased expression of PPARα target genes. The resulting increase in β-oxidation of FA enhances the supply of acetyl-CoA used for the generation of ATP via tricarboxylic acid cycle and for the generation of ketone bodies. Since CPT are rate-limiting for β-oxidation of FA, the up-regulation of CPT might increase the demand of carnitine in cells with high rates of FA oxidation. Thus, the PPARα-mediated up-regulation of OCTN associated with the feeding of frying oil can be regarded as a means to supply tissues with sufficient carnitine required for transport of excessive amounts of FA into the mitochondrion.

In contrast to the well-established inhibitory effects of frying oil on SREBP-dependent gene transcription, it is not yet clear whether frying oils also negatively regulate expression of genes that are under the control of other transcription factors. PPARα, and, in particular PPARγ, are well-known to interfere with AP-1, STAT-1 and -3, and NF-κB. Since AP-1, STAT-1 and -3, and NF-κB play a central role in inflammatory responses by the regulation of transcription of genes involved in inflammation, their inhibition largely constitutes the mechanistic basis for anti-inflammatory properties of PPAR. Although literature data regarding the effect of frying oil on PPARγ activation are scarce, one published study demonstrated that frying oil is indeed capable of activating PPARγ in vivo [24]. Although no inhibition of transcriptional activity of NF-κB or NF-κB target gene expression was observed in this study [24], the possibility that frying oils exert inhibitory effects on this signalling pathway cannot be excluded. To some extent, the lack of effect of the frying oil on NF-κB-regulated inflammatory gene transcription in the aforementioned study might be explained by the rather low basal inflammatory state of the healthy animals, which is expected to be improved only marginally by treatment with anti-inflammatory agents. In addition, it has to be considered that frying oils are known to induce oxidative stress [1-4], and the reactive oxygen species generated during oxidative stress are strong stimulators of NF-κB. Hence, frying oils obviously cause two distinct, but antagonistic effects on NF-κB (PPARγ activation and induction of oxidative stress), which partially explains the unaltered effect of frying oils on inflammatory gene expression. 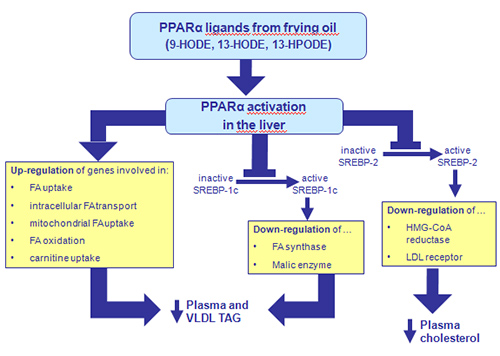