Deep-frying is one of the most commonly used means for preparing foods, although it is also one of the most complex and least understood processes. The oil, as well as the food, undergoes severe changes due to the high temperature of the process. On the other hand, the changes are difficult to predict because of the high numbers of variables involved depending on the oil, on the food and on the process conditions. Therefore, the evaluation of the complex mixture of new compounds, ingested as a part of fried foods, and the understanding of its dependence on the main variables of the frying process are subjects of great interest not only for processors and food technologists but also for nutritionists and consumers.

Table 1 summarizes the main groups of alteration compounds formed during frying resulting from the oil or fat being at high temperature, around 180°C, in the presence of air and moisture. Hydrolysis occurs due to the presence of moisture in the food. This involves breaking ester bonds, releasing free fatty acids and diacylglycerols. Additionally, due to the presence of air and exposure to high temperature, oxidation and thermal alterations take place in the unsaturated fatty acids, leading to modified triacylglycerols with at least one of the three fatty acyl chains altered. To increase the complexity, the different reactions are interrelated. For example, free fatty acids originated by hydrolysis are oxidized more rapidly than in the original triacylglycerols and most of the non-oxygenated new compounds are formed by radical interactions through autoxidation reactions under low air availability [1].

With the exception of the triacylglycerols containing either cyclic or isomeric fatty acids in the absence of extra oxygen, the new compounds formed differ in polarity from the original triacylglycerols and can be easily isolated by adsorption chromatography. This property is the basis of the analytical method most applied – polar compound determination – and most of the present regulations limiting the degradation of used frying fats and oils for human consumption have established a maximum level of polar compounds of around 25% [2,3].

In this article, a general picture of the main routes for formation of new compounds in frying is given before detailing the present knowledge on the structure and mechanisms of formation of the constituents of the different groups of compounds.

This is the well-known reaction affecting fats and oils due to the action of lipolytic enzymes or moisture. In frying, the reaction is of great interest for two main reasons:

Although hydrolysis is one of the simplest reactions during frying, inconsistent results on the variables promoting formation of free fatty acids have been obtained. For some authors, hydrolysis is the most important reaction during frying, and used frying oils with high contents of both diacylglycerols and fatty acids from the fast-food sector have been reported [4]. Nevertheless, in well-controlled frying operations of potatoes under many different conditions, hydrolytic products were minor compounds within the pool of degradation compounds, even though the substrate had a very high content of water [5]. These results indicate that other variables, still remaining unknown, have a more important effect than the moisture content of the food.

It is also interesting to note that from a nutritional or physiological point of view the diacylglycerols and free fatty acids formed during frying have little relevance, as they are similar to those originating from the action of pancreatic lipase prior to intestinal absorption.

The chemistry of lipid oxidation at the high temperatures of food processes like baking and frying is highly complex since both oxidative and thermal reactions are involved simultaneously. As the temperature increases, the solubility of oxygen decreases drastically, although all the oxidation reactions are accelerated [1,6].

Figure 2 shows the well-known scheme of the oxidation process. It proceeds via a free radical mechanism of chain reactions, where RH represents here the triacylglycerol molecule undergoing oxidation in one of its unsaturated fatty acyl groups. In the initiation stage, an alkyl radical is formed by abstraction of a hydrogen radical from an allylic or bis allylic position of an unsaturated fatty acid. In the propagation step, the alkyl radical reacts with oxygen at rates controlled by diffusion to form peroxyl radicals that in turn react with new triacylglycerol molecules giving rise to hydroperoxides as the primary oxidation products and new alkyl radicals that propagate the reaction chain. Finally, in the termination stage, radicals react between them to yield relatively stable non-radical species. 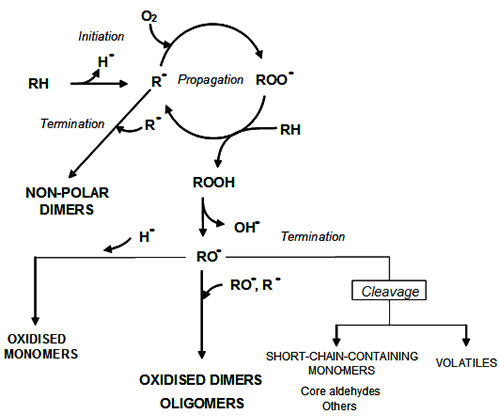 At frying temperature, as the oxygen pressure is reduced, the initiation reaction becomes more important and the concentration of alkyl radicals (R•) increases with respect to alkylperoxyl radicals (ROO•). As a result, polymeric compounds are mainly formed through reactions mainly involving alkyl (R•) and alkoxyl (RO•) radicals. These facts are in agreement with the following experimental results:

In summary, as observed in Figure 1, two triacylglycerol radicals, alkyl radicals (RR•) formed in the initiation reaction and alkoxyl radicals (ROR•) by hydroperoxide decomposition, are mainly involved in the set of termination reactions. This leads to a high variety of products of different polarity, stability and molecular weight. Three main groups of nonvolatile compounds can be distinguished by molecular weight:

As previously stated, all these reactions take place in the unsaturated fatty acyl groups attached to the glyceridic backbone and, therefore, the stable final products are triglyceride monomers, dimers and oligomers containing modified and nonmodified acyl groups. The concurrent formation of positional and geometrical isomers through autoxidation, gives rise to thousands of individual new compounds and explains the poor information on the original structures [9]. Studies on the mechanisms for their formation as well as for their structural analysis have been carried out after formation of simpler derivatives, i.e. fatty acid methyl esters, and they will be discussed elsewhere on this website.

Formation of other groups of compounds present in used frying oils without extra oxygen, i.e. Diels-Alder dimers, cyclic fatty acids and positional and geometrical fatty acids, are explained by thermal reactions and not by radical interaction. They are minor compounds of nutritional interest and paradoxically are much better known than the major oxidation compounds because of their stability and low polarity.