During frying, a number of complex reactions take place in the oil, which depend not only on the biological composition of the raw material, i.e. the content of precursors, but also on the choice of ingredients and processing conditions (frying method, heating time and temperature used during frying, type of fats and oils used, etc.). Oxidation of food lipids is one of the main causes of deterioration of food quality in terms of sensory and nutritional values. There are many different oxidation products generated from the bulk fats and oils, including volatile- and nonvolatile aldehydes, ketones, and hydroxy-, cyclic-, trans- and short-chain fatty acids [1,2].

Fats and oils contain some minor components other than acyl-lipids such as cholesterol (5-cholesten-3β-ol), phytosterols (plant sterols), tocopherols, etc. Cholesterol and phytosterols are structurally similar unsaturated steroid alcohols. Cholesterol is the main animal sterol, while β-sitosterol, campesterol, stigmasterol, brassicasterol, avenasterol, and stigmasterol are major plant sterols present in vegetable oils at much higher levels than cholesterol is in animal fats. These compounds are susceptible to oxidation following autoxidation, photooxidation and enzymatic pathways [3,4]. However, during frying of foods, oxidation of sterols occurs mainly following the autoxidation pathway.

Autoxidation of cholesterol and phytosterols is facilitated by many factors, for example, temperature, light, oxygen, free radical initiators, metal ions, pro-oxidizing agents, and a shortage of antioxidants. Oxidation mechanisms of phytosterols are believed to follow the same pathways as cholesterol oxidation. Formation of different oxysterols by autoxidation, as documented by experiments, proceeds through a free radical chain reaction. The process is initiated by abstraction of hydrogen from allylic C7 in the ring structure of cholesterol and tertiary carbons at the C20 and C25 positions. The initiation reaction, that is, the formation of free radicals, is not well understood. It is speculated, however, that some probable causative factors are nitrogen oxides, excited oxygen species, or transition metal ions that act as initiation catalysts [4,6]. The radicals thus formed react with oxygen to produce corresponding peroxyl radicals, which in turn are stabilized by yielding different cholesterol hydroperoxides. The thermal decomposition of these hydroperoxides produces 7α-hydroxy-, 7β-hydroxy-, 7-keto-, 20-hydroxy-, and 25-hydroxycholesterol. Epimeric 7-hydroperoxides of cholesterol can also attack the Δ5 double bond of cholesterol, forming secondary oxidation products of cholesterol, such as epimeric epoxycholestanol. Both epoxides, in turn are converted to 5α-cholesta-3β,5,6β-triol, through epoxy ring opening by hydration [6].

Similar oxidation products from phytosterols and their occurrence in foods have been reported in the literature [4]. Concerning oxysterols in fat and oil used for frying and cooking, only six to eight components are generally reported [7,8]. Formation of the main ring structure oxidation products are shown in Figure 1 with the example of sitosterol. 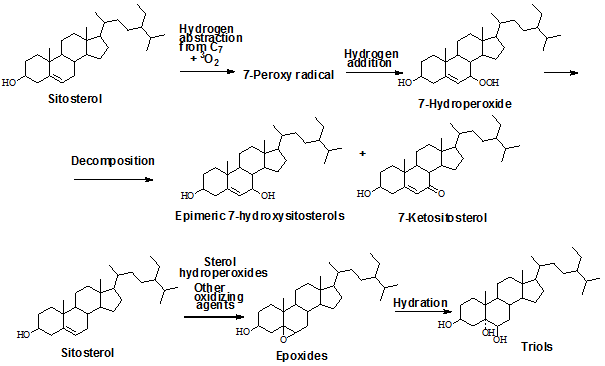 Studies on phytosterol oxidation have focused mainly on sitosterol [9]; however, oxidation of stigmasterol and Δ5-avenasterol has also been reported. Gordon and Magos [10] isolated some oxidation products of Δ5-avenasterol produced by heat treatment at 180°C of pure triacylglycerols containing 0.1% Δ5-avenasterol. After isolation of unsaponifiables and enrichment by preparative TLC, products of oxidized Δ5-avenasterol, such as epimeric 7-hydroxy-, 7-ketoavenasterol, cholesta-3,5-diene-7-one, epimeric 5,6-epoxide, cholest-5-en-3-one, cholest-4-en-3-one, and cholesta-4,6-diene-3-one were confirmed by UV spectroscopy and gas chromatography-mass spectrometry (GC-MS). Some of these compounds are illustrated in Figure 2. 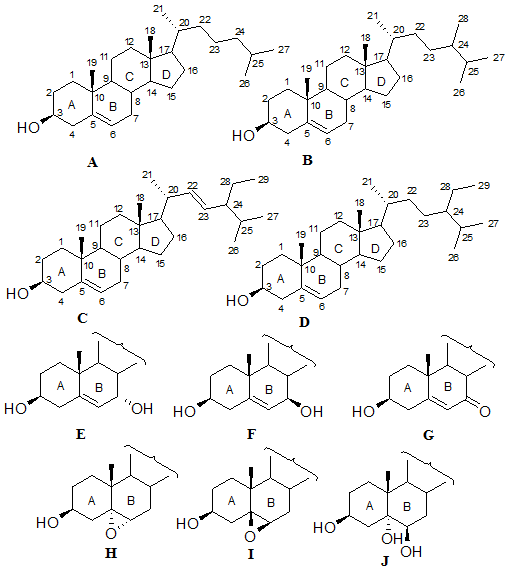 Säynäjoki et al. [14] studied photo-oxidation of stigmasterol in the presence of methylene blue as a sensitizer. The results were similar to those of Bortolomeazzi et al. [15]. As soon as photo-oxidation was started 5α-OOH and 6α - and 6β-OOH were formed, and the amount of 7α-OOH began to increase slightly more slowly than that of 5α-OOH. The authors suggested that might be due to the rearrangement of 5α-OOH to 7α-OOH. The authors did not make any effort to detect 7β-OOH because the analysis of hydroperoxides was made immediately after photo-oxidation allowing no time of rearrangement of 7α-OOH to 7β-OOH.

Adding phytosterols at much higher concentrations than endogenous levels at 2.5% in two types of oils differing in fatty acid composition (soybean oil and high-oleic sunflower oil stripped of tocopherols and phytosterols) demonstrated that soybean oil had lower thermal polymerization during heating at 180°C for 8 h in comparison to high-oleic sunflower oil during heating over 12 h. The losses of phytosterols in soybean oil was lower than in high-oleic sunflower oil, suggesting that the decomposition of phytosterols during heating is affected by the fatty acid composition of the frying oils [16]. Addition of antioxidants to retard lipid oxidation is well documented. It has been shown that addition of 0.2% α-tocopherol in refined oil significantly decreased formation of phytosterol oxidation products during heating at 180°C up to 12 h compared with some other vegetable oils [17]. A recent review has compiled data on the occurrence of phytosterol oxidation products in a wide range of samples [18]. In the past decade, animal fats and hydrogenated fats and oils have gradually been replaced with vegetable oils, amongst which palm oil is the most widely used [19]. During frying of animal food products in vegetable oils, exchange of lipids with the frying oil will occur, so the latter may contain both cholesterol and phytosterol oxidation products.