Oxidized triacylglycerol monomers are major compounds formed at frying temperature, and are characterized by the presence of one or more oxygenated function in at least one of the fatty acyl chains of the triacylglycerols. They are stable final products resulting from the decomposition of primary oxidation compounds (hydroperoxides), which are unstable at frying temperature. The main functional groups present in frying oils correspond to epoxy, keto and hydroxy, which do not continue the oxidation reaction sequences. However, because of the presence of double bonds, the oxidized fatty acids can undergo further oxidation.

The interest in the study of this group of compounds is related to both the high amounts formed during frying and the implication of oxidized dietary fats and oils in the impairment of the nutritional and physiological properties. Thus, quantification of total polar compounds and their distribution in used frying fats and oils around the limit of rejection (25% polar compounds) has shown that the amount of oxidized triglyceride monomers is considerable, ranging from 5.9% to 9.4% expressed on fat or oil weight [1].

Also, oxidized dietary fats have been implicated in a myriad of diseases, although assigning risk for a specific disease to a particular dietary pattern is challenging because the intake of oxidized fats is unknown. Nevertheless, most of the oxidized fats in foods are expected to come from fats and oils heated at high temperature and more specifically from frying fats [2]. The main reason is that at low temperature during oil storage, rarely more than 4 to 5% of triacylglycerols (around 100 meq O2/kg fat, a level at which rancid odour is clearly detectable) would be oxidized in the ingested foods as compared to the upper limit (25%) allowed in used frying fats, often surpassed in a significant number of oils and fats from fast-food outlets [3].

The main nutritional interest on oxidized monomers is supported by the high absorption of oxidized fatty acyl groups, considering that they have greater polarity and do not differ much in molecular weight when compared to unchanged fatty acids. Recently, the absorption of dietary labelled hydroxy and epoxy fatty acids incorporated in triacylglycerols was observed in humans [4,5], and special emphasis has been placed on hydroxy fatty acids, since not only are they present as stable compounds in the diet but they can also be formed after ingestion by reduction of hydroperoxides.

The formation of the epoxide ring has been reported to proceed through two distinct mechanisms at 50°C, either at the site of the double bond or nearby it [6]. In the latter case, the original double bond remains. However, only the compounds formed when the oxygen added across an existing double bond were detected at frying temperature [7-9]. Figure 1 shows the proposed mechanism consisting of a direct attack by a hydroperoxyl radical on the vinylic carbons, leading to the formation of an oxirane group and an alkoxyl radical.

Figure 1. Mechanism involved in the formation of oxirane ring.

Figure 2 illustrates the main structures formed at high temperature from oleyl and linoleyl groups after derivatization to fatty acid methyl esters (FAME). Thus, two saturated epoxides, trans-9,10- and cis-9,10-epoxystearate (ES), were found in samples of methyl oleate and triolein thermoxidized at 180°C. In addition, four monounsaturated epoxides, trans-12,13-, trans-9,10-, cis-12,13- and cis-9,10-epoxyoleate (EO), were identified in thermoxidized samples of methyl linoleate and trilinolein [7]. Further results showed that the six epoxides coming from the oleyl and linoleyl chains make up a major group of oxidation compounds in used frying oils. 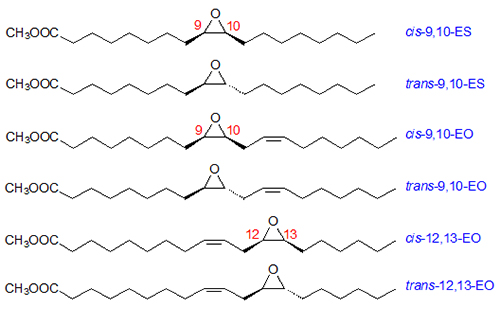 The most likely decomposition pathway of hydroperoxides is the homolytic cleavage of the hydroperoxide group to yield hydroxyl and alkoxyl radicals. The alkoxyl radical can participate in different reactions to produce compounds with keto and hydroxy functions as shown in a simplified manner in Figure 3. Hydroxy-acids may be formed through the abstraction of a hydrogen atom by an alkoxyl radical, while the formation of keto-acids has been explained on the basis of radical disproportionation where two alkoxyl radical combine to yield a hydroxy-acid and a keto-acid. 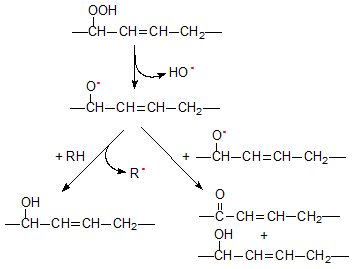 From oleic acid a mixture of the eight isomeric hydroperoxides are formed during oxidation, i.e. cis and trans 8-, 9-, 10- and 11 hydroperoxy octadecenoic acids, while from linoleic acid, a mixture of four major hydroperoxide isomers are formed, i.e. cis-9-trans-11 and trans-9-,trans-11 of 13-hydroperoxy-octadecadienoic acid and cis-10-,trans-11 and trans-10-,trans-12 of 9-hydroperoxy-octadecadienoic acid [11]. Thus, 24 individual compounds (12 hydroxy-acids and 12 keto-acids) are expected in used frying fats.

Quantification of these groups of compounds has been possible after hydrogenation to modify the polarity of the compounds and to reduce the number of individual compounds. The levels of keto-FAME were significantly lower than those of hydroxy-FAME independently of the level of oil degradation, while hydroxy-FAME had similar levels to those found for epoxy-acids [12].