Monomeric cyclic fatty acids with an internal ring structure are formed, mainly from linoleic and linolenic acids, during heating of vegetable oils at temperatures of 200°C and above, as during frying and in the refining of oils.

The nature of the cyclic products and the chemical mechanisms involved are discussed in a separate web page, but in brief during cyclization one of the double bonds is lost, so that the cyclic fatty acids isolated from linoleate are monoenoic while those from linolenate are mostly dienoic acids. These fatty acids are now known to contain five- and six-membered rings in different positions in the original alkyl chain with two substituents, which can be in a cis or trans conformation relative to the ring. Double bonds can be located within the rings or in either of the alkyl chains in various positions and these can also be of the cis and trans configuration. Therefore, each basic component gives rise to four stereoisomers, so the analysis of all may appear a daunting task.

Our approach has been to isolate a total cyclic fatty acid methyl ester fraction in the form of the methyl esters by a combination of column chromatography, urea adduction and preparative high-performance liquid chromatography (HPLC). The cyclic fatty acids are then fractionated according to degree of unsaturation, configuration of the double bonds, and size and configuration of the ring by silver ion HPLC as their phenacyl esters. The fractions thus obtained each contain a simpler range of fatty acid isomers, which are then amenable to characterization by gas chromatography-mass spectrometry (GC-MS) as their picolinyl esters and/or dimethyloxazoline (DMOX) derivatives. In addition, the assignments of structures can be greatly aided by performing GC-MS of hydrogenated and deuterated as well as native fatty acid fractions.

2.  Isolation of a Fraction Enriched in Cyclic Fatty Acids

Under normal conditions the content of cyclic fatty acids in used frying oil is only of the order of 50 ppm, therefore excessive conditions were employed in our studies to generate sufficient cyclic fatty acids to ease the problem of isolation [1]. This part of the work was carried out in the laboratory of Jean Louis Sébédio. In brief, sunflower and linseed oils were heated under nitrogen at 275°C for 12 hours in the laboratory, though parallel experiments were carried out under more realistic frying conditions.

The oils were converted into fatty acid methyl esters and then separated by column chromatography on silicic acid to remove oxidised polar and polymeric material. The nonpolar fraction, eluted with hexane-diethyl ether (95:5 by volume), was submitted to urea fractionation; the adducts contained saturated and some monoenoic fatty acids, while the non-adducted fraction contained a mixture of the cyclic fatty acids and the unchanged di- or trienoic acids.

A fraction containing the cyclic fatty acids in 96% purity was obtained from the non-adducted fraction by preparative HPLC on a column with a bonded octadecylsilyl (ODS) phase in the recycle mode. For example, a Waters ODS column was used (5.7 cm i.d. × 30 cm) with the sample (up to 10 g) with a mobile phase of either acetonitrile/water (90:10 by volume) or pure acetonitrile. Alternatively, a similar type of column of more conventional dimensions was employed with a sample on the 50 mg scale.

Here, the methods that were used for the characterization of the cyclic monoenoic fatty acids formed from linoleate only are described in detail [2,3], but similar methods were used for cyclic fatty formed from α-linolenate [4], γ-linolenate [5] and oleate [6]. Silver ion chromatography enables separations according to the positions and configurations of double bonds in unsaturated molecules, and HPLC is an especially useful variant on the technique. There is a separate section of this web site that deals with silver ion chromatography in general and methods of preparing a suitable column in particular.

In brief, we used pre-packed HPLC columns containing phenylsulfonic acid groups bonded chemically to silica, i.e. Nucleosil 5SATM, which can be converted very readily to the silver ion form. The cyclic fatty acids were converted to phenacyl esters for this purpose, as we had previously established that these gave better resolution than other derivatives. The column was eluted with a gradient of dichloromethane-dichloroethane (1:1, by volume) to dichloromethane-dichloroethane-acetonitrile (49:49:2, by volume) and the progress of the separation was monitored by means of an evaporative light-scattering detector. The nature of the separation is illustrated in Figure 1. 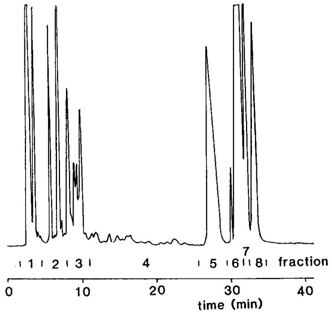 Eight fractions were collected, and analysis of these as the methyl esters by GC revealed that each still contained many components, although they were of course much less complex than the original starting material. The fractions were now more amenable to analysis by GC-MS, as there was less opportunity for interference by poorly resolved components. The first fraction was composed of fatty acids with saturated bicyclic structures [3], followed by fractions with trans-double bonds and then by those with cis-double bonds.

The most useful approach to GC-MS of fatty acids is to prepare the picolinyl esters and/or dimethyloxazoline (DMOX) derivatives for the purpose. The mass spectrometry web pages on this site describe the value of these derivatives in general terms, but in brief these give relatively simple radical-induced fragmentations that permit the location of double bonds (but not their cis-trans configurations) and of any ring structures. Picolinyl esters are arguably the best in mass spectrometric terms, but DMOX derivatives are much easier to prepare and elute at much lower temperatures and with better resolution from GC columns. Picolinyl esters were used in our first studies, but DMOX later.

Two useful subsidiary techniques were hydrogenation and deuteration prior to GC-MS analysis, as they removed any potential dubiety about ring positions and sizes, and the latter technique also provided confirmatory evidence of double bond positions.

The mass spectrum of the picolinyl ester of a monoenoic fatty acid formed from linoleate with a cyclohexyl ring between C-5 and C-10 of the original chain and a double bond at C-12 is shown as an example (Fig. 2).

The molecular ion (m/z = 371) is the same as that for linoleate itself and for all the other cyclic monoenes, as cyclization does not change the molecular weight. The presence of a cyclohexane ring between carbons 5 and 10 of the original fatty acid chain is shown by the gap of 82 amu between ions at m/z = 178 and 260. The gap of 26 amu between m/z = 274 and 300, with regular series of ions 14 amu apart on either side, is evidence for a double bond in position 12. The large ions at m/z = 92/3, 108, 151 and 164 simply represent fragmentations adjacent to the pyridine ring.

On hydrogenation, the fully saturated component gave the mass spectrum illustrated in Figure 3. The ions representing cleavage around the cyclohexane ring were in the same position, confirming that there was not a double bond in the ring or in the proximal part of the chain, while a regular series of ions 14 amu apart replaced those in the region of the original double bond.

Figure 3. Mass spectrum of the picolinyl ester derivatives the cyclic fatty acid of Figure 2 after hydrogenation.

The position of the double bond was confirmed by deuteration, since gaps of 15 amu then appeared for loss of the relevant methylene groups.

The same approach was used to characterize all the other cyclic fatty acids produced from the various other fatty acids in this study. The main problem still to be solved is the location of a double bond within a ring - the fact that a double bond is within a ring is easily ascertained, but its precise position can only be determined under limited circumstances. For example, the 6-membered ring formed from linolenate retains the double bond in its original position 12, and this gives a specific ion, resulting from a retro Diels-Alder fragmentation, which is diagnostic.

GC-FTIR spectroscopy is an extremely useful technique for the determination of the configurations (cis-trans) of double bonds in complex mixtures of fatty acids. Regrettably, it is also extremely costly and few analysts have access to it. We were fortunate to have a collaborator (Jean Luc Le Quéré) who could analyse our samples by this means. With the isomer used for Figures 2 and 3, it was demonstrated that the double bond had the cis configuration, for example. Otherwise, it would have been necessary to isolate larger amounts of each fraction for off-line FTIR spectroscopy.