Direct analysis of used frying oils and fats by high-performance size-exclusion chromatography (HPSEC) allows quantification of triacylglycerol (TG) polymers, which are the major degradation compounds formed during frying. Two characteristics of the frying process, high temperature and presence of air, favour the development of polymerization reactions originating from this complex group of compounds. The complexity derives from the different functions that can result from oxidation of different unsaturated fatty acyl groups in different TG and the different type of linkages that join TG molecules to form dimers and higher oligomers [1]. The term polymers refers normally to dimers plus higher oligomers, but when dimers are analysed separately polymers often refer to TG with an oligomerization degree equal to or higher than three (trimers and higher oligomers). 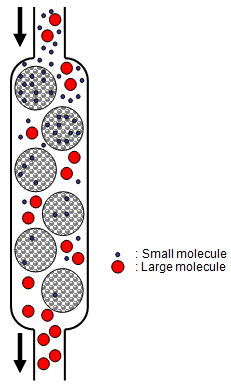 Information on the structure and formation of TG polymers is scant. In brief, it is known from studies on fatty acid methyl esters that the polymers formed during frying are essentially dimers and trimers joined through carbon-carbon and carbon-oxygen-carbon linkages. Detection of dehydrodimers, acyclic, cyclic and Diels-Alder dimers has been reported, including dimers containing monohydroxy, dihydroxy and keto groups.

Regardless of the multitude of compounds within the wide polarity and molecular weight (MW) range included in the polymeric fraction, total quantification is easily achieved by HPSEC, a technique which is unique in that separation of groups of compounds is based on their molecular size, normally related to their MW [2]. Migration of molecules between the stationary phase and the mobile phase occurs essentially by diffusion. Smaller molecules will diffuse into the pores of the column packing, partially or completely, while larger ones will not, so the latter will pass through the column more rapidly and emerge first, as illustrated in Figure 1.

The IUPAC Commission on Oils, Fats and Derivatives adopted a method for determination of TG polymers by HPSEC in used frying fats and oils in 1992, after two interlaboratory tests carried out in 1986-1987 [3,4]. The method is based on the use of a single column (30 cm × 0.77 cm i.d.) packed with a high-performance spherical gel made of copolystyrene divinyl benzene of 5 μm, tetrahydrofuran as the mobile phase and a refractive index detector (RID) with a sensitivity at full scale at least 1 × 10-4 of refractive index. Sample concentration suggested was 50 mg/mL for an injection valve with a 10 μL loop. The analysis time is about 10 min at a flow rate of 1 mL/min. Quantitative results are obtained from the calculation of Peak Area % divided by Total Area, and expressed as wt% of total oil.

Interlaboratory tests showed that the repeatability was in general high, but the reproducibility was rather poor for samples with low contents of polymers. Hence the Commission finally decided to adopt the method with a limitation of application to samples containing 3% or more of TG polymers, under the conditions proposed.

At present, all the methodologies proposed for polymer analysis in frying oils have in common the stationary phase - copolymers of styrene and divinyl benzene, normally with spherically shaped particles (5 or 10 μm). However, variations in the number of columns used (in series) and pore size (50, 100, 500 and 1000 Å) have been introduced to optimize the separations. Tetrahydrofuran is the most commonly used solvent, although toluene and dichloromethane can also be employed. Flow rates between 0.5 and 1.5 mL/min are the most usual. Detection with nonselective mass-sensitive detectors, such as a refractive index detector (RID) and an evaporative light-scattering detector (ELSD), are most common. RID is limited to isocratic separations but provides good linearity for mass-sensitive measurements. The ELSD, on the other hand, has excellent gradient capabilities and a slightly superior sensitivity, but provides nonlinear (exponential or slightly sigmoid) response curves because of the underlying light-scattering mechanisms. For quantitative purposes, a refractometer is simpler in that a single solvent is used as the mobile phase and linear responses are normally obtained in the ranges of interest.

Regarding detection systems for HPSEC, special emphasis is nowadays being paid to multidetector combinations that improve identification, exact determination of MW and quantification of polymer fractions [5]. With the exception of the combination of viscometric detection with RID, combinations of detectors have not been applied so far for analysis of polymers in frying oils. Examples of potential use are the coupling of multi-angle light-scattering and differential refractometry detectors, the combination of RID and ELSD with fluorescence spectroscopy, or the coupling of UV detection and on-line NMR spectroscopy and mass spectrometry combined with on-line collection of the chromatographic eluent for subsequent Fourier transform infrared spectrometry (FTIR).

Figure 2 shows a typical chromatogram of a used frying oil injected directly in HPSEC, under the conditions normally applied in our laboratory, which differs from the IUPAC method only in that two columns of 100 and 500 Å pore size are used in series. The sample selected for this figure was sunflower oil before (A) and after frying use (B), the latter almost at the limit for rejection (24.5% polar compounds). The chromatographic patterns show a main peak corresponding essentially to monomeric TG (MW about 900) and one or two smaller peaks at a shorter retention time, corresponding to TG dimers (MW of about 1800) and TG higher oligomers. The small peak of dimers (1.1%) present in the unused oil (A) is normally found in refined oils due to the high temperature used during deodorization. The used frying sunflower oil in the figure (B) contained 13.1% total TG polymers (4.2% TG dimers plus 8.9% higher oligomers). 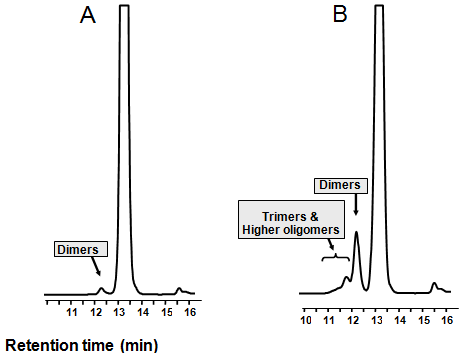 Figure 2. HPSEC chromatograms of sunflower oil before (A) and after frying use (B).

As an example of application of polymer analysis, Table 1 lists partial results obtained in a study we carried out to evaluate the efficiency of tocopherol isomers under frying conditions [7]. Oils of different degree of unsaturation were stripped of tocopherol and heated at 180°C for 2, 4, 6, 8 and 10 hours as such or with tocopherol isomers added. Results of polymers included in the table show the positive action of adding α-tocopherol (500 mg kg-1) and denote that its effect was more pronounced in monounsaturated oils (olive and high-oleic sunflower oils) than in polyunsaturated oils (high-linoleic sunflower and rapeseed oils).

TG polymers levels have been found to correlate well with those of polar compounds separated by column chromatography, the latter being the method proposed for quality control in used frying fats and oils [8]. The linear equation recently obtained in our laboratory from analyses of 105 samples of used frying fats and oils from different sources, including domestic and industrial fryers, restaurants and catering services, was y = 0.7109x - 4.0609, where y is wt% polymers and x is wt% polar compounds (R = 0.9536) [9]. Accordingly, 25% of polar compounds, as established in Spain for rejecting used frying oils, corresponded to 13.7% of TG polymers, a level between those established in Belgium (10%) and the Netherlands (16%), the only two countries including the content of polymers for used frying oil regulation [10].

The analysis of TG polymers by HPSEC stands out for its simplicity as it is only necessary to dilute the oil or fat in the appropriate solvent, and the chromatographic determination is short and performed with a single solvent as mobile phase. Quantification does not require calibration or response factors. As polymers are the major group of compounds formed in used frying oils, quantification of polymers is an excellent analytical approach to determine frying oil deterioration.