A nutritional intervention carried out on human has shown that, like the trans monounsaturated fatty acids, some of the trans-PUFA may have an effect on lipoprotein metabolism [3]. It is therefore very important to detect and quantify them in food products. This brief review will describe the two main approaches, gas-liquid chromatography and high-performance liquid chromatography (together with chemical degradative techniques) used to analyse trans polyunsaturated fatty acids in food products.

Isomers of linoleic and α-linolenic acids

The three geometrical isomers of linoleic acid, namely 9t,12t-18:2, 9c,12t-18:2 and 9t,12c-18:2, which are very often present in refined, unhydrogenated liquid vegetable oils, are readily separated in the order stated on capillary columns coated with polar cyanosilicone. The four common geometric isomers of α-linolenic acid, i.e., 9t,12c,15t-18:3, 9c,12c,15t-18:3, 9c,12t,15c-18:3 and 9t,12c,15c-18:3, which are also very often present in refined liquid vegetable oils, give peaks that can be readily recognized in GC analyses on cyanosilicone capillary columns, and they are eluted from the column in order stated above (Fig. 1) [4,5]. 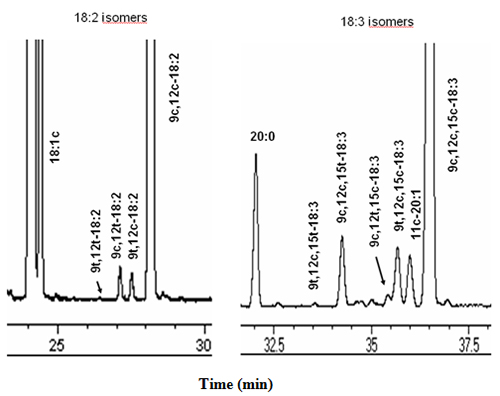 The 18:2 isomer group of partially hydrogenated vegetable oils may contain up to 15 other 18:2 isomers. The identification of these is difficult, because suitable commercial standards are not available, except for 9t,12t-18:2, 9c,12t-18:2 and 9t,12c-18:2. However, these are the isomers most often encountered and their elution patterns have been established for SP-2560 and CP-Sil 88 columns. In general, such isomers elute in the order trans,trans < trans,cis < cis,trans followed by cis,cis. We will not extend discussion on this subject because of the efforts made by the industry to reduce the amount of partially hydrogenated oil in human diet. However, pertinent information has been published [6].

Even greater care must be taken when analysing the 18:3 isomers present in some refined vegetable oils. 11c-Eicosenoic acid (11c-20:1) is a natural monounsaturated fatty acid present in appreciable amounts in some vegetable oils, such as peanut oil and canola oil. Animal fats, especially lard, also contain this fatty acid but at lower levels. The 11c-20:1 elutes in the 18:3 region of the chromatogram and its relative retention time with respect to the 18:3 varies with the column temperature. Depending on the temperature of the column, it may elute before, with or after α-linolenic acid (9c,12c,15c-18:3). Therefore, an understanding of these variations is critical for the correct identifications of all the peaks in the 18:3 region of the chromatogram and for achieving correct fatty acid compositional data (for details see [5,7]).

Isomers of eicosapentaenoic and docosahexaenoic acids

Studies carried out on the development of analytical methods for identifying and quantifying trans polyunsaturated fatty acids with 5 or 6 ethylenic bonds are rather scarce and literature on the subject is limited [8-11]. In one study [8], trans isomers of eicosapentaenoic (EPA, 20:5n-3) and docosahexaenoic (DHA, 22:6n-3) acids were prepared by isomerization with p-toluenesulfinic acid and the isomers fractionated by silver ion HPLC in order to have pure fractions of mono- and di-trans isomers. BPX-70 columns seem to have a more suitable selectivity for the analysis of trans EPA and DHA isomers compared to SP-2560. Polyethylene glycol (PEG) phases may also be used to analyse trans isomers of long-chain PUFA in fish oil concentrates only if 22:0 and 22:1 are not present in significant amounts [9].

Quantification of geometrical isomers of highly unsaturated fatty acids such as EPA and DHA is a complex issue considering the number of components and isomers that may result from a heat treatment [10]. A validated method was recently published by Fournier et al. [11] to quantify low amounts of geometrical isomers of EPA and DHA in refined fish oils. It consists of converting the fish oil in to methyl esters and then analysing these by GC on a 100 m CP-Sil 88 column using a temperature programming method and hydrogen as the carrier gas. The elution of the EPA and DHA geometrical isomers present in a fish oil deodorized at 220°C is presented in Figure 2. The only drawback of such an analysis is the co-elution of a minor mono-trans isomer of DHA and all-cis DHA. However, for samples containing low levels of trans isomers this led to an underestimation of about 10%, which is within the magnitude of uncertainty of the method.

For definitive identification of trans polyunsaturated fatty acids, it is necessary that they are each isolated in sufficient amount and purity for chemical characterization. Although silver ion TLC is useful for obtaining a total trans-18:3 fraction from isomerized oils [13], HPLC in the silver ion mode appears to be the most useful micropreparative method for isolation of individual isomers, as illustrated in Figure 3 for α-linolenic acid [14]. 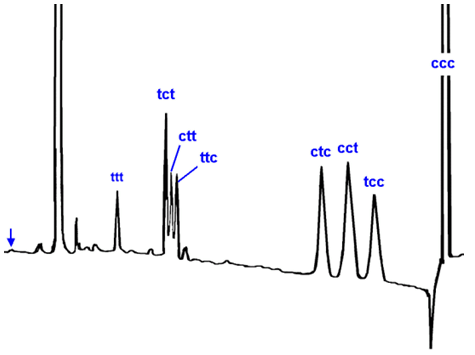 Figure 3. Separation of phenacyl esters of geometrical isomers of α-linolenate by HPLC in the silver ion mode with UV detection at 238 nm. The mobile phase was a gradient of dichloromethane and methanol, the column (25 cm × 4.8 mm ID) was packed with Nucleosil 5SATMconverted to the silver ion form, and it was maintained at 10°C [14].

The all-trans isomer eluted first, followed by each of the di-trans isomers, then the mono-trans isomers and finally all-cis-18:3. Similar results were obtained by Adlof, who was also able to resolve 15 of the 16 possible cis/trans-isomers from arachidonate in the form of the methyl esters on a Chromspher LipidsTM column with hexane-acetonitrile (98.5:1.5, v/v) as mobile phase [15]. Later, Mjøs was able to separate methyl esters of isomerized EPA and DHA into groups according to the number of trans double bonds, although individual isomers were not resolved [8].

4.  Position of a trans Double Bond in a Fatty Acid Chain

Determination of the position of a trans double bond on the carbon chain is a complex procedure (Fig. 4), which involves a combination of partial hydrogenation of the purified fatty acid, isolation of the resulting monoenes and separation into cis and trans fractions by silver nitrate thin-layer chromatography or HPLC, and subsequent analysis of each fraction by GC coupled with Fourier-transform infrared spectroscopy (GC-FTIR) and by GC coupled with mass spectrometry (GC-MS) of the dimethyloxazoline (DMOX) derivatives. 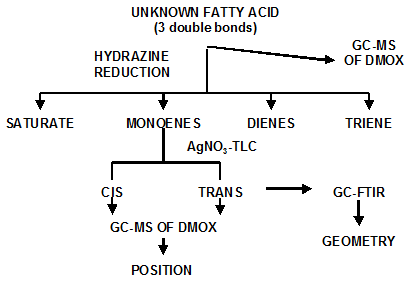 Partial hydrogenation of the unknown polyunsaturated fatty acid is a critical step, which is usually carried out using hydrazine reduction as described by Ratnayake et al. [16]. From a fatty acid having 3 double bonds, hydrazine reduction will give a mixture of the saturated fatty acid, 3 monoenes, 3 dienes and some unreacted fatty acid. As the hydrogenation takes place without modification of the position or the geometry of the original double bond, the double bonds in the three monoenes will be representative of the true positions. Consequently, structure elucidation is carried out on the monoenes. While the position of each ethylenic bond is given by GC-MS, the geometry of each double bond can be confirmed by GC-FTIR, although the elution characteristics on silver ion chromatography are usually a reliable guide.