Objective and reliable analysis of used frying fats can be carried out at different levels: first, evaluation of the total new compounds formed by adsorption chromatography [1]; second, separation and quantification of the main groups of new compounds, i.e. polymeric triacylglycerols, oxidized monomeric triacylglycerols, diacylglycerols and fatty acids by size exclusion chromatography [2]; third, quantification of the main groups of fatty acids undergoing thermal or oxidative degradation by adsorption and exclusion chromatography following oil derivatization to FAME [3]. Nevertheless, a further step in the evaluation of heated or used frying fats is essential to clarify the structures and amounts of oxidation compounds which may impair the nutritional value of food lipids. In this direction, quantification of oxidation compounds that are easily absorbed seems to be of top priority as most of the oxidized fats in foods are expected to come from fats and oils heated at high temperature and more specifically from frying fats [4].

Epoxy, hydroxy and keto acids are the major fatty acids formed through hydroperoxide decomposition, although short-chain compounds linked to the glyceridic backbone due to the breakdown of hydroperoxides are also formed in significant amounts. The analysis of oxidized fatty acids, either as fatty acid methyl esters (FAME) or triacylglycerols (TAG), is not difficult when they are present in major amounts in specific seed oils such as ricinoleic (12-hydroxyoleic) acid in castor oils or vernolic (12,13-epoxyoleic) acid in vernonia oils. However, in used frying oils their quantitative determination has been difficult for two reasons: their low concentrations and the presence of a high number of other minor compounds formed simultaneously.

Interesting studies have been carried out to analyse the presence of oxidation compounds in intact lipid molecules, paying special attention to the aldehydes bound to the TAG backbone, also known as core aldehydes. In this context, two different approaches have been used: combination of thin-layer chromatography (TLC) and high-performance liquid chromatography coupled with mass spectrometry (HPLC-MS) on dinitrophenyl hydrazone derivatives [4] and direct analysis of oxidized lipid molecules [5,6]. These studies are of enormous interest due to the biological activity found for some specific structures and, in parallel, have significantly increased knowledge on the chemistry of oxidation in complex systems. Normal phase [5] and reverse phase HPLC-MS [6] have been applied to the separation of oxidation compounds in oxidized fats and oils. Hundreds of different molecules have been identified, and among them hydroperoxides, epoxides and aldehydes bound to TAG stand out.

In the case of fats and oils heated at frying temperature, the analysis is even more complex due to rapid hydroperoxide decomposition by different radical reactions. In this regard, the studies are limited to the analysis of heated triolein and tristearin where the complexity of the new molecules formed from a simple TAG gives a clear idea of the enormous efforts applied in this type of research. Analysis of triolein heated at high temperature until levels of polar compounds reached around 30% revealed the complex degradation of the samples as compared to those samples oxidized at low temperature. Apart from short-chain compound formation, epoxy, hydroperoxy and keto functions in the TAG molecules were detected [7]. The number of molecules identified was very low and it was inferred that efficiency of separation techniques needs to be significantly improved for a better definition of the new compounds formed at high temperature.

More recently, matrix-assisted laser desorption ionization - time-of-flight mass spectrometry (MALDI-TOF MS) has emerged as a useful tool for lipid analysis. In comparison to other established methods, mass spectra can be easily obtained in minutes without any previous separation or derivatization. Thermoxidative degradation of vegetable oils has been monitored either by MALDI-TOF MS [8] or by laser desorption ionization - time-of-flight mass spectrometry (LDI-TOF MS) [9]. Also, easy ambient sonic-spray ionization mass spectrometry (EASI-MS) has been shown to efficiently desorb and ionize the main oil constituents from an inert surface under ambient conditions. The analysis is simple, requires just a tiny droplet of the oil and is performed without any pre-separation or chemical manipulation. It also causes no fragmentation of TAG ions, hence diacylglycerol and monoacylglycerol profiles and contents can also be measured. The EASI-MS profiles of TAG permit authentication and quality control and can be used to access levels of oxidation or hydrolysis of fats and oils [10].

However, while these techniques may be useful to obtain a fingerprint of the oxidation status of the sample, the structural information obtained is of low value as the same molecular weight may correspond to different compounds. For example, even starting from a monoacid TAG, epoxides formed at the site of the double bond would have the same molecular weight as hydroxyacids. Under these circumstances, only a minority of signals can be attributed unequivocally to a specific compound.

When the aim is to obtain quantitative data of oxidized compounds, a different approach is necessary to overcome the difficulties of separating hundreds or even thousands of different molecules present in heated fats and oils. It is important to remark that oxidized compounds can be present in hundreds of combinations depending on the other fatty acyl groups esterified in the TAG molecule, which in turn may or may not contain mono- or polyoxygenated functions.

Quantitative analysis can be carried out by converting fats and oils into FAME. Although the structure of the TAG molecules is lost, the main advantage is that derivatization to FAME allows concentration of the compounds bearing any specific oxidized function. Essential requirements of the derivatization technique selected are good repeatability and recovery of the compounds, avoiding artefact formation. Base-catalysed transesterification was selected as the most appropriate reaction because of the excellent recovery of the compounds of interest without modifications. The method permitted the accurate quantitation of major bound compounds in model TAG systems by gas chromatography (GC). Short-chain FAME, i.e. methyl heptanoate and octanoate, and aldehydic FAME, i.e. methyl 8-oxooctanoate and 9-oxononanoate, were the major compounds initially found in the group. However, it was also deduced that the oxidation of aldehydes to acids and their quantification was possible after a second methylation step with diazomethane [11]. Figure 1 shows the significant part of the chromatogram corresponding to a used frying oil at the limit of rejection and the conditions applied. The total amount of this group of compounds was in the order of mg/g, confirming that all these bound compounds coming from hydroperoxide breakdown are only a minor part among those oxidized compounds formed. 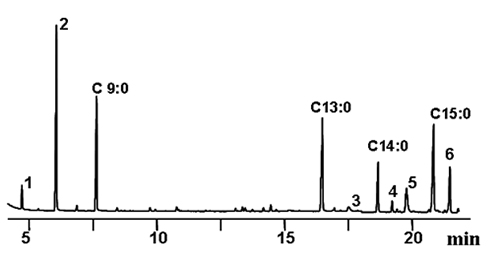 Quantification of the specific structures of oxidized compounds of molecular weight similar to that of the starting fatty acids remains a very difficult task even after fat derivatization to FAME. Quantification of monoepoxy compounds in model TAG systems by GC was not difficult, and their levels were much higher than those found for short-chain compounds [12,13]. The main structures found correspond to the formation of the oxirane ring at the site of the double bond. However, when considering heated fats and oils, the separation and accurate quantification of the new compounds formed required elimination of the interference produced by components naturally present in fats and oils. A preliminary separation of nonpolar FAME by solid phase extraction on silica cartridges was useful not only to solve the problem but also to concentrate the compounds of interest [12].

Regarding keto and hydroxy FAME in used frying fats, total amounts of oxoacids, estimated as 2,4-dinitrophenylhydrazones, and hydroxy and polyhydroxyacids, quantified as pyruvic acid 2,6-dinitrophenylhydrazone esters, have been reported [14]. Also, interesting information is available on different GC-MS techniques for quantification of hydroxy compounds obtained from reduction of hydroperoxides in fats and oils oxidized at room temperature [15]. However, keto and hydroxyl FAME were identified as numerous minor GC peaks of low resolution when starting from fats and oils heated at frying temperature. In order to increase the sensitivity and accuracy of the determination, reduction of double bonds by hydrogenation was necessary to simplify the structures of the compounds and, thus, to reduce the number of analytes.

Figure 2A exhibits the GC chromatogram of the polar FAME obtained from conventional sunflower oil after elimination of nonpolar FAME by adsorption on silica. As can be observed, the good resolution of epoxy FAME makes it possible to quantify their original structures individually, but keto and hydroxy FAME were found as numerous minor peaks that were not resolved. Figure 2B shows the three groups of saturated compounds after hydrogenation and the improvement obtained from a quantitative point of view. 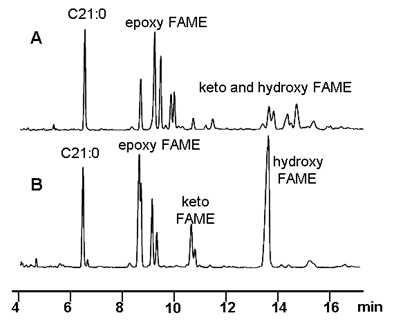 A scheme of the complete analytical procedure for the quantitative determination of epoxy, keto and hydroxy FAME is shown in Figure 3. Methyl heneicosanoate (C21:0) was selected as internal standard and methyl t-9,10-epoxystearate, methyl 12-oxostearate and methyl 12-hydroxystearate were used to obtain the response factors that were applied to quantify epoxy FAME, keto FAME and hydroxy FAME, respectively. 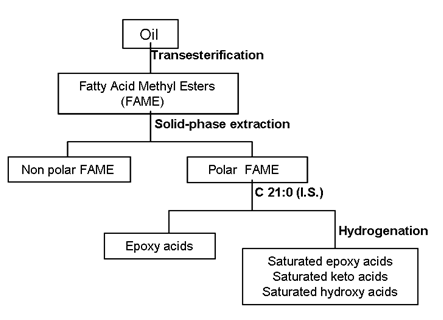 Figure 3. Analytical scheme for the analysis of oxidized fatty acids

Epoxy and hydroxy FAME were the two major groups of compounds among the oxidized monomers, each group accounting for about 25% of the total oxidized monomers in real used frying oils at the limit of rejection [16].