The action of phenolic antioxidants to delay lipid oxidation in fats and oils is well known although most of the information is related to their effects at room temperature during storage or at the moderate temperatures of accelerated tests. At room or moderate temperatures, autoxidation reactions taking place through chain reactions of free radicals are relatively slow; hydroperoxides are the major products formed and their concentration increases until advanced stages of oxidation. Under these conditions, the activity of primary antioxidants (AH) have been ascribed to the easy hydrogen transfer from their phenolic hydrogen to a peroxyl radical. Hydrogen transfer produces a radical, which might combine with another lipid peroxyl radical in a series of termination reactions yielding nonradical oxidation products as shown in equations [a] and [b].

However, oxidation at the high temperatures of food processes like frying is far more complex because both oxidative and thermal reactions are simultaneously involved. Chemical degradation of antioxidants seems to be the major pathway for antioxidant loss at high temperatures although volatilization and steam distillation due to both the high temperature and the large amount of steam water escaping from the food have also been postulated.

Figure 1 shows the different behavior of tocopherols at room and frying temperature in conventional high-linoleic and genetically modified high-oleic sunflower oils (Such oils were produced in particular sunflower lines for experimental purposes (see 21) and are not, currently, commercially available), i.e. oils with similar tocopherol composition but differing in the composition of triacylglycerols. Figure 1A shows the formation of polar compounds in the sunflower oils with and without their natural tocopherols heated at 180°C for 10 hours as well as the parallel loss of tocopherols when they were present in the samples [1]. Similar levels of tocopherols were present in both oils, more than 95% being α-tocopherol. The action of the natural antioxidants is clearly demonstrated by the higher levels of polar compounds of the stripped oils at any heating period. However, the effect of tocopherols in delaying the formation of polar compounds was not directly related to the degree of oil unsaturation. The most important aspect of the behaviour of tocopherols at frying temperature concerns their rapid exhaustion particularly in the less unsaturated oil. Unexpectedly, not only was the loss of tocopherols more rapid in the monounsaturated sunflower oil but also tocopherols were exhausted at lower oil degradation. These results have been reported in different studies either in model systems or for oils of different degrees of unsaturation and types of tocopherols [1,5-7]. The rapid loss of α-tocopherol suggests its substrate-independent degradation as the most important fact at frying temperature, probably with a secondary mode of action being the effective protection found on the formation of degradation compounds with respect to the tocopherol-stripped oils. In contrast, Figure 1B shows that, at room temperature, the formation of new compounds and the loss of tocopherols clearly depended on the degree of oil unsaturation, being more rapid in the more unsaturated sunflower oil. 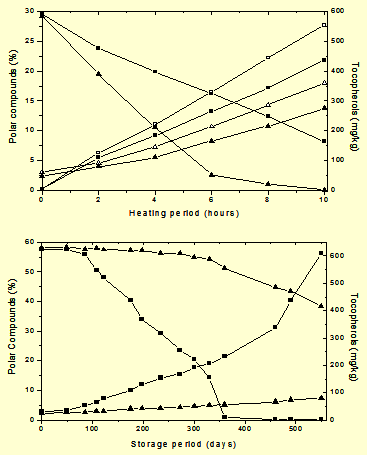 From these results it is deduced that, on one hand, special attention should be paid to frying operations using monounsaturated oils, as they become unprotected at levels of polar compounds much lower than the limit established in official regulations for discarding fats for human consumption (25 wt% polar compounds). If the fried food has to be stored, oxidation at low temperature would be very rapid in the absence of antioxidants regardless of the degree of oil unsaturation [8]. On the other hand, these results indicate that accelerated tests at moderate temperatures or under the conditions of Rancimat tests may be useful to predict the relative shelf life of different oils and fats but they would not give an indication of their frying performance.

Concerning the type of tocopherols, the relative stability of α-, β-, γ- and δ-tocopherol at high temperatures has been studied in detail and there is agreement that α-tocopherol is less stable than δ-tocopherol, while β- and γ-tocopherols would degrade at intermediate rates. In this respect, new sunflower lines that contain γ-tocopherol as the major natural antioxidant instead of α-tocopherol, which is characteristic of standard sunflower oil, are of special interest [9].

The action of tocotrienols has been less studied. In general, the stability of α-tocotrienol was found to be similar to that of α-tocopherol both in palm olein and in purified oils to which both antioxidants had been added [10,11]. However, the order of stability of the different tocotrienol homologues was different to that found for their tocopherol counterparts, with γ-tocotrienol being the least stable [11].

There are three groups of natural antioxidants whose beneficial action in frying has been consistently reported. These are polyphenols in virgin olive oils, mainly comprised by hydroxytyrosol, tyrosol and their derivatives, and lignans [14] γ-oryzanol, i.e. sterol esters of ferulic acid, in rice bran oil [15]; and lignans, mainly sesamine, sesamolin and sesamol, in sesame oil [16].

The good performance of virgin olive oil in frying as compared to refined olive oil is mainly attributed to the presence of polyphenols. Interestingly, studies analyzing the evolution of tocopherols and polyphenols during frying reported a high rate of degradation for hydroxytyrosol and its derivatives, a similar or lower rate for α-tocopherol and a low degradation rate for tyrosol, its derivatives and lignans [17]. Therefore, the effective protection found is probably more related to the group of less active antioxidants present, i.e. lignans and tyrosol and their derivatives, which remain longer at frying temperatures.

There have been a limited number of reports on the good frying performance of pure sesame and rice bran oil in spite of their wide consumption in populous Asian countries. A high number of recent studies, however, report a significant increase in oil thermostability, as well as a higher retention of natural tocopherols, in the blends of different oils with either sesame or rice bran oil [18].

Native sesame oil contains predominantly sesamin and sesamolin and a small amount of sesamol. Neither sesamolin nor sesamin has been found to possess any appreciable antioxidant activity. However, sesamolin may be hydrolyzed during frying, due to the food moisture, giving sesamol and sesaminol. Both compounds are highly stable and have a synergistic effect with tocopherols, decreasing oil degradation [19]. As for rice bran oil phenolic compounds, information on the expected hydrolysis of γ-oryzanol during frying has not been found. On the contrary, it has been reported that the content of oryzanol did not change in practice under usual home frying conditions, regardless of its initial content in the oil [20].

In summary, given the complexity of the frying process attention should be paid to the two following points: