The lipids in frying oils as well as in fried food products include unsaturated fatty acids and sterols (cholesterol and phytosterols), both vulnerable to oxidation. During the past decade, animal fats and hydrogenated fats and oils have gradually been replaced with vegetable oils, amongst which palm oil is probably the most widely used. During frying of animal food products in vegetable oils, exchange of lipids between the frying oil and the fried products will occur and thus both may contain oxidation products from cholesterol (COPs) and analogous compounds from phytosterols (POPs). Thus the number of sterol oxidation products (SOPs = COPs + POPs) in frying oils or fried food products can be quite substantial.

The analysis of SOPs is challenging for numerous reasons. They are present in trace levels (ppm or ppb) in complex mixtures in the unsaponifiable fraction of frying oils. Some of the SOPs are epimers having similar molecular weights, and the formation and destruction of some of the SOPs may occur during work-up steps. Analysis of SOPs involves extraction of lipids in the case of fried foods, otherwise direct saponification or transesterification, enrichment, and subsequent qualitative and quantitative determination by gas chromatography (GC) and GC-mass spectrometry (MS), or high-performance liquid chromatography (HPLC) linked to MS. Enrichment of SOPs requires complete separation from the unoxidized sterols for adequate resolution even on high-resolution GC capillary columns.

The analytical procedure has to be designed in such a way that it will guarantee an efficient recovery of SOPs from the frying oils/food lipids and minimize the generation of artefacts during the sample clean-up and work-up steps. The most common analytical protocols used for SOPs analysis follow more or less the same route, and an overview is shown in Figure 1. 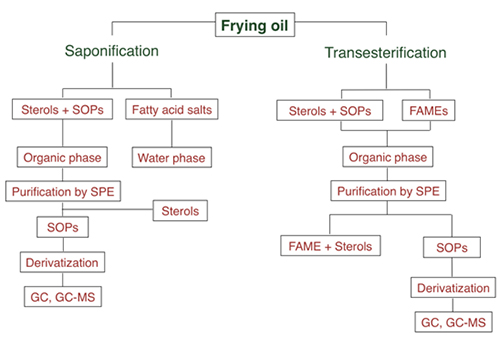 Further purification of SOPs requires preparative methods such as liquid chromatography (LC), preparative HPLC, preparative TLC, and so forth. These preparative methods have virtually been replaced by solid-phase extraction procedures (SPE). Various types of SPE column materials and solvent systems have been used for this purpose. SPE is very simple, quick, low-cost and effective for separation of unoxidized sterols from the SOPs after cold saponification or transesterification by using relatively small volume of solvents. Silica and aminopropyl phases have shown the best efficiency and reproducibility. Since SPE exploits differences in the polarity of interfering compounds and analytes, adequate separation is achieved by stepwise elution with solvents of increasing polarity, and thereby enrichment of SOPs can be successfully accomplished. The SOP-containing fraction is often eluted with acetone or a mixture of acetone and methanol (60:40, v/v). When SOPs are enriched, twofold SPE may be necessary to remove completely unoxidized phytosterols. The twofold SPE system is quite efficient in removing almost all the unoxidized sterols but is time consuming. Recently, a single-step SPE method was developed for POPs using a silica column (1 g), which can also be used in SOPs determination after saponification or transesterification. Unsaponifiables or transesterified samples are dissolved in 1 mL n-hexane-diethyl ether (9:1, v/v) and applied to the SPE column. Next the column is washed with 15 mL of less polar solvent system; n-hexane-diethyl ether (9:1, v/v) and 10 mL n-hexane-diethyl ether (1:1, v/v), and finally pure SOPs are eluted with 10 mL acetone.

After purification or enrichment of SOPs, further quantitative and qualitative analyses are performed on underivatized SOPs by HPLC or HPLC-MS, or on SOPs derivatized to trimethylsilyl (TMS)-ethers for subsequent analysis by using GC and GC-MS. The separation of SOPs is rather complicated, because they consist of a mixture of oxysterols generated from cholesterol, brassicasterol, campesterol, stigmasterol, and sitosterol. Separation of all individual SOPs on a single HPLC column is difficult to achieve due to this complexity.

Capillary GC is generally the method of choice because of its excellent resolving power, with sensitive flame ionization detection in the nanogram range. Coupling the mass spectrometer as a detector for GC-MS adds more value to the analysis. To overcome the thermal degradation and volatilization of SOPs, TMS-ether derivatization has often been employed. The TMS ether derivatives are then directly injected into the GC system. It is worth mentioning that the reaction medium must be free from water for a complete derivatization.

Fused-silica capillary columns with apolar stationary phases (100% dimethyl polysiloxane or 5% diphenyl- and 95% dimethyl- polysiloxane) and with an inner diameter of 0.20-0.32 mm and a length of 25-60 m have been used in the analysis of COPs and POPs by GC. The elution order of most common COPs and POPs is as follows: 7α-hydroxysterols, unoxidized sterols, 7β-hydroxysterols, β-epoxysterols, α-epoxysterols, steroltriols, 25-hydroxysterols and 7-ketosterols. It is important that SOPs should be separated completely from the unoxidized sterols even when being analysed by using high-efficiency GC capillary columns, because of co-eluting and overlapping of unoxidized sterols and oxysterols, although this difficulty can be overcome by using GC-MS in selective ion monitoring mode. Further improvement in separation has been attempted by using two-dimensional GC capillary columns, i.e. a DB-5MS (a nonpolar column, 5% diphenyl- and 95% dimethyl-polysiloxane) and a DB-35MS (a mid-polar column, 35% diphenyl- and 65% dimethyl-polysiloxane) with similar dimensions (25 m × 0.2-0.33 mm).

Identification in chromatographic methods is based on comparison of retention data between compounds analysed and standard samples. However, difficulty arises if standard samples are not available and more than one compound has the same or very close retention times when multiple components may appear as one peak. Therefore, confirmation of the chromatographically separated peaks must be performed by other methods, and the most common in use is a mass spectrometer coupled to GC or HPLC. Capillary GC with mass spectrometry as a detector is the most powerful identification and separation technique presently available. Similarly, MS as a detector for HPLC is also very powerful tool, although the separation efficiency of HPLC columns is much lower than with capillary GC and good separation rarely occurs. Mass spectral data generated from cholesterol, sitosterol, brassicasterol, campesterol and stigmasterol can be found in the literature, including their side-chain oxidation products.