Interesterification can be defined as a redistribution of the fatty acid moieties present in a triglyceride oil over its glycerol moieties. This can be random when the reaction is carried out in a single, liquid phase. When during the reaction higher-melting triglycerides are allowed to crystallise, their mainly saturated fatty acids are withdrawn from the liquid phase so that the distribution of the fatty acids still present in the liquid phase will no longer be random. It will continue to redistribute these residual fatty acids and thereby form further higher-melting triglycerides that then also crystallize. This is called ‘directed interesterification’. Directed interesterification processes are no longer practised industrially.

Early processes that arrived at a randomised fatty acid distribution did so by a two-step process. Grün [1] allowed triglycerides to react with glycerol to generate partial glycerides that in a second step were esterified with butyric acid and capronic acid to arrive at a synthetic butter fat. Normann [2] went the opposite way and acidolysed the fat with butyric acid and then reacted the free fatty acids present with glycerol. Both these processes required a catalyst and were operated at elevated temperatures (140 to 250°C). A high-temperature process using water to partially hydrolyse the triglycerides and recombine them when the water was flashed off has been described by Eckey [3].

He also introduced the low-temperature (<100°C) interesterification process using sodium methanolate (or sodium methoxide, NaOCH3). Alkali metals such as sodium and potassium and their liquid alloy (NaK) were used in the US for the directed interesterification of lard [4] yielding a shortening product with extended plastic range. In Europe, various hardstocks were produced by interesterification for margarine with a high linoleic acid content. One such margarine [5] consists of 15-30% of a fraction of a fully hydrogenated interesterification mixture of palm kernel oil and palm oil and 70-85% liquid oil. The product “Crokvitol” was so successful that Unilever acquired the company producing it. It has been sold again and now operates under the name IOI-Loders Croklaan and uses the Crokvitol™ brand for enzymatically interesterified products.

The methanolate being an alcoholate, it did not require much imagination to suggest that the catalytically active intermediate in the sodium methanolate-catalysed interesterification was indeed a glycerolate [6]. Around the same time, another mechanism was proposed [7] involving an enolate resulting from the α-hydrogen abstraction by the methanolate anion from a fatty acid moiety. This mechanism assumed a β-keto ester to be the catalytically active intermediate but the observation that the concentration of this ester increased gradually during an interesterification reaction made this mechanism much less likely. Much later Liu [8] demonstrated that the presence of this α hydrogen was essential for the interesterification to proceed. Finally (?), Dijkstra et al.  [9] proposed a mechanism that takes all the observations known to them at that time into account and provides a tentative explanation for observations that had not been adequately explained by earlier mechanism proposals [10].

According to this mechanism [11], the sodium methanolate that is added to the oil to be interesterified can react in various ways giving rise to a number of different anions, one of which is a glycerolate anion. However, if the concentration of free hydroxyl groups in the oil is low, enol formation according to:

is probably the most likely reaction. This reaction liberates methanol and just like methanol that has been added to the reaction mixture this methanol can react to form a fatty acid methyl ester and a glycerolate anion according to:

This reaction explains that interesterification reaction mixtures contain an amount of fatty acid methyl esters (FAME) that is equivalent to the amount of sodium methoxide added. It also explains that further methanol added to the reaction mixture eventually ends up as FAME. Perhaps some FAME are also formed on addition of the sodium methoxide according to:

The above reaction can explain how the addition of sodium methanolate leads to FAME formation but does not explain that all methanol moieties introduced by the sodium methanolate end up as FAME. This is an important distinction since in practice, some water will be present in the oil and this will react with sodium methanolate to form sodium hydroxide and methanol; it is this free methanol that also ends up as FAME, for which we need the enolate mechanism as explanation.

When the enolate anion reacts with the free hydroxyl group in a partial glyceride, this leads to interesterification according to:

The fatty acid that was attached as an enolate to the glycerol moiety of the left ends up being attached to a glyceride on the right, which glyceride reacted with the enolate since it had a free hydroxyl group. The above equation implies that the rate of interesterification of a glyceride oil should depend on its free hydroxyl (partial glyceride) content. This implication awaits experimental verification.

An essential aspect of this enolate mechanism is that it explains that on catalyst inactivation, an equivalent amount of free fatty acids or soap is formed according to:

This soap formation could not be explained by the glycerolate mechanism. According to Rozendaal [12], the sodium hydroxide formed when the glycerolate reacts with water would saponify the glycerides present, but this reaction is slow and would not go to completion, whereas the soap formation has been observed to be quantitative. His suggestion that inactivating the catalyst with acid water would diminish the soap/FFA formation is not borne out by experiment either.

and form a highly mobile intermediate anion that subsequently reacts with a fatty acid moiety by abstracting an α-hydrogen and thereby regenerates the catalytic intermediate according to:

That the above reactions actually occur has been demonstrated experimentally [9] by using triglycerides with fatty acid moieties the α-positions of which had been deuterated and interesterifying these triglycerides in the presence of acetone: in the course of the reaction, the acetone became deuterated.

In reactions where triglycerides react with other triglycerides (or rather partial glycerides), with alcohols such as methanol during the transesterification process to produce biodiesel from triglyceride oil, or with polyols such as glycerol that may be added as such (glycerolysis) or result as a by-product from other reactions (methanolysis), several equilibria between the various anions are involved. The positions of these equilibria are determined by the differences in thermodynamic properties of these anions and by the relative abundance of the reagents involved. The figure below shows the main equilibrium reactions involved: 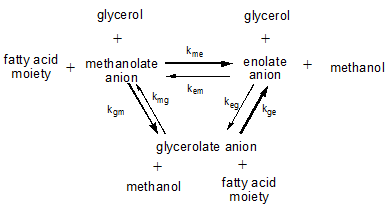 The proposed enolate mechanism [9,11] also provides an explanation for the observation that β-ketoesters are formed gradually and that the catalytic activity is thermally unstable. At low temperatures, the catalytic intermediate formed by the addition of sodium methanolate to triglyceride oil is active for a long time and allows a directed interesterification reaction to proceed for hours. Above 120°C, the intermediate starts being very active but it loses its activity in a matter of minutes. The mechanism proposes that the enolate anions are gradually converted into β-ketoesters and that the latter have hardly any catalytic activity.

On an industrial scale, the chemical interesterification process is most often carried out as a batch process. This has the advantage that different products can be made in the same installation without cross-contamination and this has the advantage that their inventories can be kept quite low. Another advantage of the interesterification process – and this applies to both chemical and enzymatic interesterification - is that it allows for a wide choice of the raw materials to be used. The process aims at producing a hardstock with certain physical properties. These determine the triglyceride composition of the product in broad terms and therefore also its fatty acid composition. I say ‘broad terms’ since replacing a linolenic acid moiety in a triglyceride by an linoleic acid moiety hardly affects the physical properties of a hardstock in ways that really matter. Accordingly, the fat blend to be interesterified can be selected on the basis of fatty acid composition only, whereby the agricultural origin and the physical properties of the blend components are irrelevant. So if palm kernel olein, a by-product of the fractionation of palm kernel oil, is the cheapest source of medium-chain fatty acids and hydrogenated palm stearin the cheapest source of long-chain saturated fatty acids, these can be profitably used as components of an interesterification fat blend, where only fatty acid composition matters.

Because sodium methanolate reacts with water and fatty acids, the fat blend to be interesterified must be dry and neutral. In practice, this is achieved by using neutralised components and ensuring their neutrality by adding some caustic soda to the interesterification reaction vessel and evaporating any moisture present by applying a vacuum. There is no need to use fully refined oil (RBD, refined, bleached, deodorised). During interesterification, some colour may be formed so that the interesterified product must be bleached and deodorisation is preferably carried out just prior to the product being used in or shipped to downstream manufacturing. Using RBD oil as raw material is therefore unnecessarily expensive.

When the oil blend to be interesterified has been dried, the interesterification catalyst can be added. If this is sodium methanolate, an amount of 0.05 wt% suffices. The reaction is very fast but usually allowed to proceed for some 30 minutes. Then the catalyst is inactivated by the addition of water, which leads to the formation of soaps. If water containing some acid is used for the inactivation, free fatty acids (FFA) are formed instead of soaps.

The soapy water can be removed by decantation and residual soaps can be removed by washing with water, treatment with a silica hydrogel or by adding some acid. This acid converts the soaps into FFA that are subsequently removed during vacuum steam stripping (deodorisation). This deodorisation process also ensures the removal of the fatty acid methyl esters (FAME) formed from the methanol introduced by the sodium methanolate catalyst.

Both the soaps/FFA and the FAME constitute a yield loss and this loss is considered to be the main disadvantage of the chemical interesterification process. Given the relative molecular mass of sodium methanolate of 54 and the stoichiometric production of soap/FFA and FAME, using 0.05 wt% of catalyst leads to a yield loss of at least 0.5 wt% oil. Using more catalyst would make this yield loss even higher. Trying to avoid or reduce this yield loss is therefore a worthwhile objective.

Avoiding the formation of FAME implies using a catalyst other than sodium methanolate or evaporating the methanol as soon as it has been formed. Since the latter possibility requires special equipment, it is therefore hardly opportune. Using another catalyst is certainly possible. The use of sodium glycerolate was disclosed in 1965 [13] and subsequently it has also been used in continuous interesterification plants in Europe. Using sodium or potassium metal or their alloy is another way to avoid introducing methanol into the interesterification reaction mixture that has been tested industrially. Whether methanol-free catalysts like sodium hydride and sodium amide have ever been used on an industrial scale is not clear from the literature.

Just as FAME formation can be avoided by preventing methanol from entering the reaction mixture, soap formation can be avoided by inactivating the catalyst in the absence of water [14]. Since the next step involves treating the reaction mixture with bleaching earth, it would be quite elegant if acid-activated bleaching earth were to be an effective reagent for catalyst inactivation, but this still has to be tried in a laboratory.