The hydrogenation process of edible oils was invented by Wilhelm Normann in 1902 [1]. At that time, it was possible to follow the progress of the reaction by measuring the iodine value of the reaction product. Measuring its melting point also provided a way of characterisation and measuring both soon revealed that when a certain oil was partially hydrogenated to a certain melting point, its iodine value could vary. This led to the concept of selectivity, be it as yet poorly defined.

In the mid-1900s, determining a fatty acid composition was laborious, not very accurate and far less detailed than current analyses based on capillary GLC. Even so, an attempt to facilitate the understanding of what happens during a hydrogenation reaction was based on the fatty acid composition of the hydrogenation product [2]. It proposed the working hypothesis that the rate of reaction of a fatty acid in a triglyceride molecule did not depend on the chemical nature of the other fatty acids in said molecule. This so-called “common fatty acid pool” concept has been most useful for half a century when it was demonstrated to be incorrect [3].

To describe what happens during a hydrogenation run, a number of different selectivities have been defined:

Other ways to describe what happens during a hydrogenation have comprised the introduction of the concept of shunt reactions. Accordingly, the oleate shunt assumed that a linolenic acid moiety reacted to form oleic/elaidic acid without forming a di-unsaturated intermediate [5]. Rate constants were estimated from analogue (!) computer simulations but forgotten about when more reliable fatty acid compositions became available. Another conclusion that turned out to be untenable was that monoenoic acids are always being saturated when they are being isomerised [6]. It was based on the observation that both behenic acid (C22:0) and trans-brassidic acid (trans-C22:1) were formed when high erucic acid rapeseed oil was partially hydrogenated. However, when the reaction was repeated under selective conditions at much higher temperature, trans-brassidic acid was formed without behenic acid being formed (W.L.J. Meeussen, personal communication).

It is now commonly accepted that the nickel-catalysed hydrogenation of unsaturated fatty acids follows the Horiuti-Polanyi mechanism. According to this mechanism, molecular hydrogen is adsorbed onto the nickel surface (reaction 1 in the figure below where adsorbed species are indicated by an asterisk) and dissociated into two hydrogen atoms (reaction 2). Fatty acids are also adsorbed onto this nickel surface by their double bond or bonds and in a first step, a hydrogen atom is added to this bond to form a half-hydrogenated intermediate. If a second hydrogen atom is then added to this intermediate, the original double bond has been saturated but because the first addition is reversible, the intermediate can also dissociate. 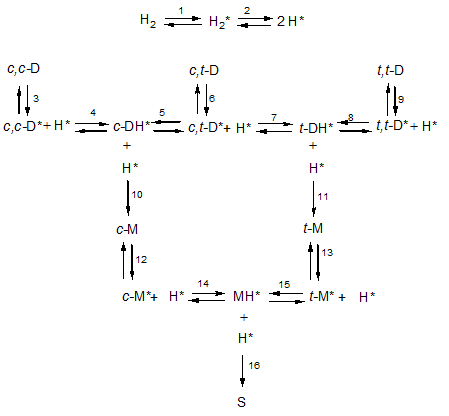 Such a reaction scheme is shown in the figure above. It shows how dienes (D for short) are hydrogenated to from monoenes (M) and finally stearic acid (D). So linoleic acid (9c,12c-octadecadienoic acid, c,c-D) is reversibly adsorbed in reaction 3 and a hydrogen atom H* is reversibly added to the adsorbed linoleic acid (c,c-D*) to form a half-hydrogenated intermediate (c-DH*). This is still adsorbed as shown by the asterisk (*) but has only a single double bond left that has retained its cis-configuration. This half-hydrogenated intermediate can do one of several things. It can react irreversibly with a further hydrogen atom (H*) in reaction 10 or it can dissociate.

The hydrogen atom leaving on this dissociation can be the same as the one that has been added as shown in reaction -4 (where the minus sign indicates the reverse reaction), it can be a different atom on the same carbon atom or it can be a hydrogen atom leaving from a different carbon atom. Accordingly, the fatty acid resulting from this dissociation can have undergone geometrical isomerisation so that the original cis-configuration of the double bond has been changed into a trans-configuration as shown in reaction 5. It can also have undergone positional isomerisation meaning that the double bond has shifted one position along the fatty acid chain; this type of isomerisation is not shown in the figure. In methylene-interrupted polyunsaturated fatty acids this can lead to the formation of conjugated double bonds. Because the double bond is no longer present in the half-hydrogenated intermediate, this intermediate can rotate around the original double bond and this can result in an isomerisation that is both geometrical and positional.

When a half-hydrogenated intermediate is saturated by reacting with another hydrogen atom, heat is liberated since the hydrogenation process is strongly exothermic. Consequently, the reaction product is so ‘hot’ that it immediately leaves the catalyst surface. By sharing its kinetic energy with its surroundings, it cools down so that it can be re-adsorbed at its remaining double bond (c-M*). This monoene can then react with an adsorbed hydrogen to form the half-hydrogenated monoene (MH*) that just as above can react in several ways one of which (reaction 16) leads to stearic acid.

3.  Kinetics of the Hydrogenation Process

Temporarily stopping the agitator will cause the hydrogen still present to react so that its concentration will drop and the rate of hydrogenation will slow down. Switching it on again will cause hydrogen to dissolve at a somewhat faster rate than before it was switched off since the difference between the hydrogen solubility and its concentration has increased. A lower rate of reaction and a higher rate of hydrogen dissolution will cause the hydrogen concentration to increase. That increase causes the rate of reaction to increase but the rate of dissolution to decrease until both rates are equal again. During a hydrogenation run, equipment and process parameters like the agitator, the amount of catalyst or the pressure do not change. This means that during such a run the hydrogen concentration is determined by the reactivity of the system as reflected by its fatty acid composition.

The cis-trans equilibrium is governed by an enthalpy difference of ΔH = 4 kJ/mol. This means for instance that at 100°C, the equilibrium corresponds to 79% trans, whereas at 250°C the value is only 72%. In the figure, the half-hydrogenated intermediate MH* has an equal likelihood of reacting according to reaction –14 or reaction 15. Consequently, the position of this equilibrium must originate from a preceding reaction. Since it is enthalpy related, it is likely to originate from a difference in activation energy. Accordingly, the frequency factor of the elaidate moiety is likely have the same value as the oleic acid one and equal o as well.

Once the diene has been adsorbed onto the catalyst surface, it reacts with a hydrogen atom and to what extent it dissociates or reacts with a further hydrogen atom is affected by the concentration [H*] of the hydrogen atoms on the catalyst surface, whereby a high concentration favours saturation. This holds for the dienes (c-DH* and t-DH*) but also for the monoene (MH*). However, the hydrogen concentration is not the only factor affecting this extent. It is also affected by the rates of dissociation and these are governed by the respective rate constants whereby k-4 = k5 << k-14 = k15.

Accordingly, half-hydrogenated dienes remain on the catalyst surface and just wait there until they are further hydrogenated. This explains why partially hydrogenated vegetable oils hardly contain dienes with trans double bonds (c,t-D, t,c-D and t,t-D). Half-hydrogenated monoenes on the other hand readily dissociate again and this explains the presence of large amounts of trans monoenes. This amount can be decreased by favouring the saturation of MH* over its saturation by increasing [H*] by increasing the rate of agitation, increasing the system pressure and/or lowering the temperature of reaction.

The above kinetics also explain why the linoleic acid selectivity decreases during a hydrogenation run. This selectivity has been defined as the ratio of the rates of two saturation reactions. For the linoleic acid saturation, the rate-determining step is the formation of the half-hydrogenated intermediate. Once this has been formed, it will hardly dissociate and just wait until it reacts with a further hydrogen atom. So this latter rate is almost equal to the rate of formation of the half-hydrogenated intermediate and therefore proportional to [H*]. For the oleic acid, the situation differs in that the half-hydrogenated intermediate dissociates causing its steady state concentration [MH*] to be proportional to [H*]. The rate of the bimolecular saturation reaction can be assumed to be proportional to the concentration of the reagents, thus to [MH*] x [H*] and therefore to [H*]2. During a hydrogenation run, the reactivity of the reaction mixture decreases. Therefore, the hydrogen concentration increases causing [H*] to increase and thereby favouring reactions that depend more strongly on this hydrogen atom concentration. Accordingly, the saturation of monoenes that is suppressed by a low hydrogen concentration in the start of the reaction gets more and more favoured as and when the reaction proceeds causing the linoleic acid selectivity to decrease.

What happens during a hydrogenation reaction has intrigued scientists for over a century. During this period, various hypotheses have been put forward some of which were refuted quite soon, some much later and some even survived up till now. So although insight in what happens has steadily improved, it is still far from perfect. The frequency factors l and o introduced recently have not yet been quantified and a reliable instrument to measure the hydrogen concentration in the bulk of the oil has not been developed, although its principle of operation has been disclosed.

In fact, the current trans scare may well be responsible for my impression that research on the hydrogenation process is decreasing. The number of publications on the subject certainly is. I regard this as a pity. I found working in the field of hydrogenation a highly rewarding challenge.