Early nutritional and toxicological studies on heated or frying fats (for review see Sébédio and Grandgirard [1]) reported that cyclic fatty acids (CFAM) may be some of the most toxic compounds found in oils which had been submitted to a heat treatment at high temperatures (above 220°C). However, most of the older studies were carried out on total used oils or on partially enriched fractions of cyclic fatty acids. Few reports dealt with pure synthesised or isolated CFAM fractions. It was therefore very difficult in some cases to relate physiological effects observed to the CFAM only.

In order to further study their toxicity as well as the mechanism of action, methods were developed to isolate CFAM from heated oils. A great deal of research was also carried out to develop an analytical method to quantify them in food products and biological tissues. This document will deal with these two issues. Separate web pages deal with the formation and structural analysis of CFAM.

The methods so far developed to isolate CFAM are a combination of column chromatography, urea inclusion, and preparative high-performance liquid chromatography (HPLC) (Fig. 1). Generally, CFAM formed from linolenic acid were isolated from heated linseed oil and those formed from linoleic acid from heated sunflower oil. The isolation procedure is simpler with heated linseed compared to heated sunflower oil. Because of the high content of linoleic acid in sunflower oil, urea fractionation (Fig. 1) does not permit complete elimination of linoleic acid from the CFAM fraction, and a last step using preparative HPLC on a C18 reversed-phase column is mandatory to obtain a relatively pure fraction. This is not the case when dealing with heated linseed oil. Heated soybean or canola instead of heated linseed may also be used as similar CFAM profiles are obtained, but then the last purification step may be necessary due to the 18:2/18:3 ratio in the starting oils. 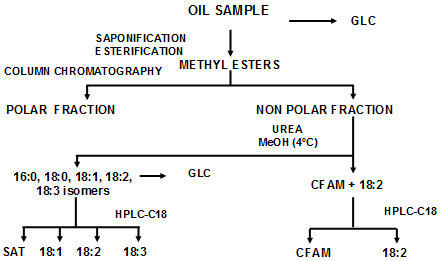 All methods proposed to determine the amount of cyclic fatty acids (CFAM) in heated fats and oils are based on analysis of fatty acid methyl esters by gas–liquid chromatography (GC). Cyclic fatty acids formed from either linoleic or linolenic acid have, even on highly polar columns, ECL values close to those of the fatty acids such as 18:1, 18:2, and 18:3 geometrical isomers, which are present in deodorized and/or frying oils (Fig. 2). Therefore, it is not possible by this direct GC method to determine the quantity of CFAM precisely, due to the large overlap with unsaturated fatty acids. One solution is to fully hydrogenate the sample and convert all polyenes to 18:0, which is then separated from hydrogenated CFAM, which have longer retention times on polar phases [2]. 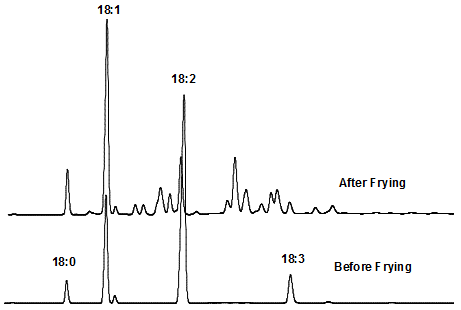 Figure 2. Gas-liquid chromatographic analysis of soybean oil before and after frying.

Furthermore, the quantities of C18-CFAM in the oils are usually small. Therefore, it is often necessary to concentrate them prior to any quantitative analysis. Extensive research was carried in the past to find a suitable method to concentrate these CFAM without modifying the profile and without any loss during the enrichment steps. Among all the different methods developed, low-temperature crystallization [3] and urea adduction [4] were most often used. The choice of the enrichment method was shown to have a great impact on the amount of C18-CFAM detected. For example, Gere et al. showed that utilization of urea resulted in a loss of 20% of CFAM during the complexation step [5].

In 1994, Sébédio et al. [6] described a method utilizing HPLC for the enrichment step. Briefly, total fatty acid methyl esters were hydrogenated after addition of ethyl hexadecanoate as the internal standard (IS). A fraction containing the IS and CFAM was isolated by HPLC on a C18 reversed-phase column, and the quantity of CFAM was then calculated after analysis by GC on a polar phase. Good reproducibility was obtained not only for oil samples but also in biological assays (lipids from rat tissues, heart cell cultures). Furthermore, no modification of the CFAM profile was obtained, which was not the case when urea adduction was carried out on a small sample size, such as lipids isolated from animal tissues. As an example, Figure 3 shows a CFAM fraction isolated from lipids extracted from french fries fried in soybean oil. 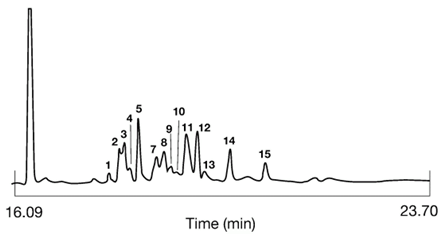 Figure 3. Gas-liquid chromatographic analysis of a CFAM fraction of lipids from french fries fried in soybean oil. The first eluting peak is 17:0 which is present in the unheated oil. Peaks 1 to 15 are CFAM. For identification see Sébédio et al., Food Res. International, 29, 109-116 (1996).

Cyclic fatty acid methyl esters are present not only in heated vegetable oils but also in fish oils, which may indicate that these have been submitted at some point to heat treatment [7]. As 20:5(n-3) (eicosapentaenoic acid, EPA) and 22:6(n-3) (docosahexaenoic acid, DHA) are the major fatty acids of fish oil, cyclic fatty acids with 20 and 22 carbons were found.

Data on quantification of CFAM formed from the major long-chain polyunsaturated fatty acids present in fish oil and other marine lipids such as EPA and DHA are scarce. Sébédio and others developed a method to quantify small amounts of C18-CFAM and of C20- and C22-CFAM formed from EPA and DHA, respectively, in fish oils [2,8]. After transformation of lipids into FAME, the latter are hydrogenated with platinum oxide catalyst. The mixture is fractionated by RP-HPLC on a semipreparative C18 reversed-phase column and the three enriched fractions collected contain the C18 CFAM with 17:0, the C20 CFAM with 19:0 and the C22 CFAM with 21:0. The quantity of CFAM is then calculated after analysis of each fraction by GC-FID on a polar phase (CPSil 88 column) with good reproducibility for each. Recently, using the same methodology, Berdeaux et al. quantified C18-, C20- and C22-CFAM in fish oils deodorized at different temperatures [9]. The data indicated that a significant amount of CFAM was produced during a deodorizing treatment using temperatures of 220°C and upwards.

Unfortunately, only a few quantitative data on the CFAM content for oils collected from actual restaurants or industrial operations are available. In one study by Frankel et al. [10], the fats and oils were a mixture of vegetable shortening, animal-vegetable shortening, partially hydrogenated vegetable oil, cottonseed oil, and soybean oil, while Gere et al. [11] described experiments carried out with mixtures of sunflower oil and lard. In a study by Sébédio et al. [12], peanut, sunflower, and soybean oils, as well as some unknown mixtures of oil were used. Samples studied by Poumeyrol [13] were palm and peanut oils. CFAM levels found in the different studies are in good agreement, and ranged from 0.01 to 0.66% in the most altered samples. A maximum of 0.1 % CFAM was also found during industrial productions of pre-fried french fries and crisps [14,15].