One of the key steps in the refining process is the elimination of impurities from crude vegetable oils especially the phosphatides or so-called gums (see chapter Degumming - Introduction for their structural formulae). They are mainly present in oils extracted with solvent from soya beans, sunflower seed and rapeseed. They have to be removed in the early refining stage for two main reasons: They are responsible for high refining losses due to their emulsifying properties and they decompose, darkening the oil due to their thermal instability.

For fats obtained by pressing and water, which are low in phosphatides, (20 ppm of phosphorus), such as palm oil, palm kernel oil, olive oil, the degumming process is quite simple: it suffices to mix the fat with a small quantity of a strong degumming acid such as phosphoric or citric acid to dissociate the nonhydratable phosphatides (NHP) into phosphatidic acid (PA) and calcium or magnesium bi-phosphate salt. Both components are removed by adsorption on bleaching earth in the so-called Dry Degumming Process.

Phosphoric acid is used only in small quantity (0.1-0.3%) of an 85% solution because excess is not adsorbed onto the earth causing problem of hydrolysis or causing the phosphorylation of mono- or diglycerides during physical refining. Excess cannot be eliminated with calcium carbonate as it reverses the reaction from PA into NHP [1].

For oils rich in phosphatides especially in NHP, the dry degumming could not be applied as it would require a huge quantity of bleaching earth. Conventionally these oils were refined by alkali refining. The drawback of the alkali refining process is the entrainment of significant quantities of neutral oil with the soap stock resulting in a loss of yield. Additional costs are incurred by the soap stock splitting and effluent treatment.

Since the early 1980s, a wide variety of chemical degumming processes have been developed by refiners and equipment suppliers, boosted by physical refining being much more attractive than alkali refining. Compared to existing routes, alkali refining and physical refining represented on the lefthand side of Figure 1, new routes - acid degumming, organic refining, acid refining and EDTA degumming are shown on the righthand side besides enzymatic degumming, which will be treated separately in the next chapter.

Chemical degumming involves the liberation of PA from its salts with an acid that is stronger than PA itself. The degumming acid is either phosphoric acid, which forms a precipitate with Ca and Mg, or citric acid, which forms a complex of Ca and Mg. Alternatively, a salt of ethylene diamine tetraacetic acid (EDTA) can be used as a chelating agent of Ca, Mg and Fe ions.

The acid degumming process can be considered as an alternative to the water degumming process in that it uses a degumming acid combined with water. Crude oil, either water degummed or not, is treated by an acid, usually phosphoric acid, citric acid or malic acid in the presence of water. For oils containing relatively low amounts of NHP (e.g. sunflower oil) this process can lead to degummed oil with a lower residual phosphorus content (5 to 30 ppm) than water degumming. The acid degummed oil is then dry degummed and physically refined. The process is usually carried out at elevated temperature around 90°C, as described in the literature [2,3].

The process may incorporate a cooling stage (40°C) like that proposed by Unilever in the Superdegumming process [4] to obtain lower residual phosphorus levels than the standard acid degumming. In the acid degumming process, Figure 2, phosphoric acid forms a precipitate or citric acid forms a complex with calcium and magnesium and then the acid is diluted with water. Such a dilution does not raise the pH sufficiently for the dissociation of PA so that the residual phosphorus content remains still high and then it requires post-treatment, a dry degumming step for physical refining. Alternatively post-treatment with synthetic hydrogel Trisyl can be considered so that the bleaching earth can be partially replaced [5]. This process is mainly used for good oils containing low NHP. 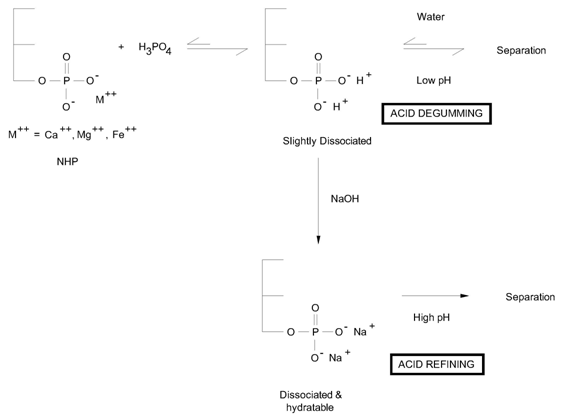 The organic refining process [6] can be considered as a variant of the water degumming process in that it uses a large excess of citric acid that is recovered after separation and recycled. As described in the process, it involves a high-shear mixing between oil and citric acid solution like in acid refining. Only one centrifuge is required to remove the heavy phase composed of the lower citric acid layer, which is separated by decantation and then recycled, the upper oil layer, which is also recycled, and then the intermediate phase, the gum layer.

The process is only applicable to crude oils and the efficiency of the process relies on the large excess of citric acid used combined with hydratable phosphatides (HP) entrained in the citric acid layer. Advantages of this process include: it improves the refined oil yield, it reduces the quantity of chemicals, the total water usage and then lowers environmental costs.

This process is applicable to both water degummed oil and oils that have not yet been water degummed. Like the acid degumming process, the process uses a degumming acid to decompose the NHP, but instead of diluting this acid with water making it weaker, the acid refining process neutralizes partially the PA by the addition of alkali. With the higher pH reached in acid refining compared to acid degumming, the dissociation of PA is improved and thus its hydratibility is maximized. Consequently, acid refined oils show lower residual phosphorus content, less than 10 ppm, and therefore can be physically refined (see Fig. 2).

The process is usually carried out at different temperatures using a high-shear mixer. In the TOP-Degumming process [7] crude oil or water degummed oil is heated up to 90-105°C, mixed with degumming acid with high-shear mixer, held a few minutes, mixed with dilute caustic and then separated and washed with water.

The advantages of TOP are an increase in oil yield from 0.6 to 1 % for TOP + Physical refining compared to chemical refining, and elimination of pollution problems associated with soap stock splitting. The efficiency depends appreciably on the agitation and the type of crude oil.

A whole variety of processes have been developed based on partial neutralization of PA by sodium hydroxide without touching the free fatty acids.

In this process, the NHP are decomposed by the action of EDTA which has a much stronger affinity for divalent Ca and Mg ions than PA. Added to oils, EDTA forms a strong complex or a 5-membered EDTA-Ca chelate as shown in Figure 3.

The efficiency of the process depends on the degree of dispersion and contact between the chelating agent (EDTA) and the NHP. In the Soft Degumming (Tirtiaux) [14] a detergent, sodium lauryl sulfate( SLS) is used to facilitate the contact between the NHP in the oil phase and the water phase solution containing the chelating agent. However, the separation of both phases was made more difficult due to the high stability of the emulsion.

The Complete degumming process (Crystallisation & Degumming) [15] requires a high-shear mixing as well but uses only the hydratable phosphatides present in oil as emulsifier. Consequently the separation was much better due to the presence of a temporary emulsion phosphatides-EDTA. The overall refining oil yield of the Complete Degumming process with soya bean oil or rapeseed oil is higher than that obtained with Soft Degumming process and is on average 1% higher than that obtained with alkali refining, which compensates for the cost of chemicals.