1.  Why Does One Fractionate and Why in Solvent?

We all generally like the snap of chocolate, the creaminess of a biscuit filling, the pourability of cooking oil and the texture of pastries. All these products depend on the melting or solid and liquid characteristics at the various temperatures of the oil or fat used in the particular product.

Reality will be slightly different from the above simplification with different crystal modifications and also the presence of other minor fatty acids.

It is also possible using hydrogenation and interesterification (either chemical or enzymatic) to introduce higher melting point fatty acids (trans or saturated) into a more liquid oil such as soya bean or canola.

If there is an oil or fat with triglycerides with a range of melting points present, it is possible to separate them by fractional crystallisation. This can then enable products with more specific solid/liquid characteristics to be produced with better functionality in the product and therefore of a higher value. The process “trick” is to crystallise and separate these various triglycerides. The quality of separation of crystals from any remaining liquid oil is called the separation efficiency (SE), where 100% SE means perfect removal of all liquid oil from the crystals.

The reason why one uses solvent fractionation is that it is possible to achieve SEs of >90% relatively easily compared to typically 60 to 70% for dry (or nonsolvent) fractionation. A higher SE means a purer crystal product which then gives a much sharper melting point. For example, the sharp melting point at about 30°C is what is loved in chocolate! Figure 1 shows a range of possible fractionated palm products where a hard palm mid fraction (PMF IV 34) and a hard palm stearin (POs IV 2) are readily made using solvent fractionation. 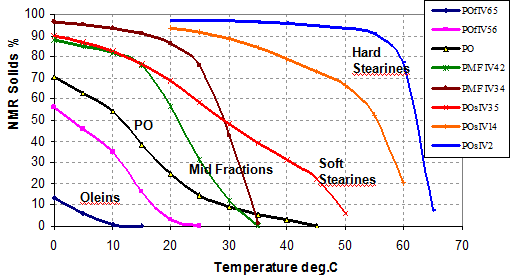 2.  What Solvents Are Used?

Solvents that have been used for solvent fractionation of “lipids” are:

Choice of solvent depends on:

3. Benefits of Crystallisation in Solvent

Oils and fats are typically fairly viscous with a viscosity higher than 30 mPa at fractionation temperatures and potentially >100 mPa. A typical solvent, such as acetone, has a viscosity of typically 0.3 mPa. Adding solvent to edible oil for fractionation dramatically lowers the viscosity and as a result speeds up molecular diffusion to give much quicker crystallisation (see Perry [1]). What might take 10 hours or more in dry fractionation can happen in less than 30 minutes! This means that the crystalliser volume required for a given plant capacity can be much smaller and also makes continuous crystallisation a practical solution. Figure 2 shows a typically used continuous crystalliser for solvent fractionation. They are usually of a wiped or scraped surface type for good heat transfer.

A further benefit is to do with the percentage of crystals that need to be grown for the desired product. In dry fractionation the limitation for percentage of crystals that can still be managed in a pumpable slurry is between 20 and 35%, depending on the oil. However, the higher percentage is often associated with quiescent crystallisation where there is a reasonably solid cake formed. By adding solvent one needs to think of percentage crystals (or solid) in the total liquid of solvent and remaining liquid oil. For example, crystallising 60% of the oil with 5 volumes of solvent to 1 of oil will actually only be 10% for this solvent fractionation and therefore still a liquid slurry. Therefore, solvent fractionation enables a far higher yield of crystals to be separated from the oil in a single step and also the removal of small amounts of liquid oil (e.g. 10 or 20%) from a starting feedstock to “harden it up”.

As stated above, the addition of solvent dramatically reduces the viscosity of the oil. As filtration rate is proportional to the inverse of viscosity in the basic case (see Perry [2]), it is clear that a crystal slurry in solvent fractionation will filter more easily. This enables the use of continuous filters. Originally rotary drum filters were used but these have been superseded by various forms of flat band vacuum filters. The use of a solvent means the filter has to be enclosed. Filters available on the market today are usually of an indexing type rather than a continuous moving belt. There are two forms of indexing, one indexes the filter belt and filter cake forward after a period of filtration above a stationary filtration deck, the other is where the filtration deck moves forward with the belt during filtration and then the filtration deck indexes back to restart the moving filtration step. Figure 3 shows a typical indexing flat band filter.

Addition of solvent to the oil means that any liquid left around the crystals is already diluted. However, a negative effect of crystallising in solvent is that the crystals tend to grow to “fill the space” so that the actual liquid volume (oil and solvent) entrained with the crystals can be more than with dry fractionation. Although the actual mass of liquid oil entrained will be less than in dry fractionation, high SEs have not really been achieved with just filtration! However, using a flat band filter of sufficient length enables the filter cake of crystals formed after filtration to be washed with clean solvent which contains no liquid oil. The basis of filter cake washing is well described by Wakeman [3]. The most efficient form of filter cake washing is with “plug flow” displacement of the dirty liquid (liquid oil and solvent) with a clean one (pure solvent). Dispersion effects, both practical and diffusional, move one away from perfect plug flow displacement. However, the concept of a “void volume wash ratio” is important to understanding the effectiveness of filter cake washing. The void volume is the volume of liquid held up with a unit quantity of crystals. In perfect plug flow, by allowing one void volume of clean solvent to displace that void volume of dirty liquid one would end up with pure crystals in clean solvent (100% removal and thus 100% SE). The dispersion effects mean that one needs more than one void volume of clean wash solvent to approach 100% SE. Figure 4 shows the fractionation of the contaminant removed against the void volume wash ratio for different amounts of dispersion as defined by an effective Peclet number – (see Wakeman [3]). In practice, one will need 1.2 to 1.5 void volumes of wash to achieve >90% SE. 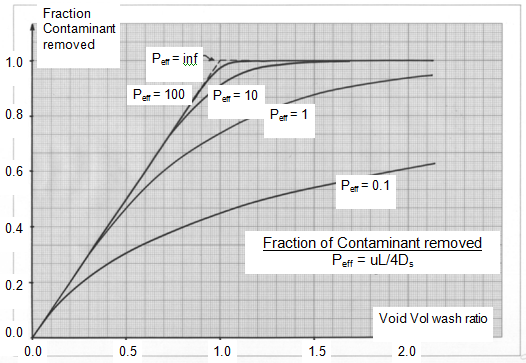 The use of solvent for fractionation requires the recovery of that solvent from the products, both crystals (stearin) and liquid (olein). Obviously a solvent with a higher heat of evaporation will require more energy for that evaporation; therefore, hexane would be the first choice and methanol the last! Choice of solvent is however not just based on energy consumption! It is also necessary to remove solvent from the product down to safe levels before discharging from the plant. This would be typically about 100 to 200 ppm and require not just evaporation but also some solvent stripping process. For energy efficiency one would choose multiple effect evaporators. How many effects chosen will depend on energy cost and payback on the extra investment required for more effects. Use of steam for the last stripping stage will also require some form of recovery of the solvent from that stripping steam. Use of solvent in fractionation will therefore have a higher energy cost per ton of oil feedstock fractionated.

In crystallisation, there is more liquid to be cooled down because of added solvent. Therefore, it can be expected that more energy will be consumed in any refrigeration system per ton of feedstock compared with dry fractionation.

With both of the above, because the addition of solvent reduces the liquid viscosity, there are many opportunities for both “hot” and “cold” energy recovery in a solvent fractionation plant.

The solvents used are volatile and potentially explosive. Therefore, the plant has to be a closed system and probably with a nitrogen blanket to remove oxygen to a safe level to prevent explosion. All equipment has to conform to relevant safety standards for hazardous environments such as the NFPA and ATEX. These requirements also add to the investment and space requirements for a solvent fractionation plant.