During frying, new compounds are formed due to the joint action of high temperature and the presence of air and moisture. The most abundant compounds formed possess higher polarity than their parent triacylglycerols (TG) and low volatility. Hence adsorption chromatography is the most appropriate technique to determine the alteration level in used frying oils and fats by means of isolation and quantification of the total polar compounds. These include modified TG with at least one of the three fatty acyl chains altered, resulting from oxidation and thermal changes taking place in the unsaturated fatty acids, i.e. oxidized monomeric, dimeric and oligomeric TG. Also included are free fatty acids and diacylglycerols released through hydrolytic reactions. Only minor TG containing cyclic or isomeric fatty acids and no oxygenated functions are excluded. Advantages of determination of polar compounds in comparison to other criteria used, such as oxidized fatty acids insoluble in petroleum ether, smoke point and free fatty acids, are mainly the following: (i) values obtained provide a direct measurement of the degradation produced by the different variables involved in the frying process, and (ii) determination is independent of the type of oil used in frying since initial values of polar compounds are similar in unused oils. Most of the present regulations limiting the degradation of used frying fats and oils for human consumption have established a maximum level of polar compounds of around 25% [1].

In this article, the basis of analysis of total polar compounds by adsorption chromatography and gravimetric determination by the Standard IUPAC Method and their modifications will be discussed.

Figure 1 illustrates the analytical method followed to determine total polar compounds according to the Standard IUPAC Method 2.507 [2]. The method was proposed in 1981 by the International Union of Pure and Applied Chemistry [3], three years after publication of the original method [4]. Then, essentially the same procedure was adopted by other official methods [5,6]. 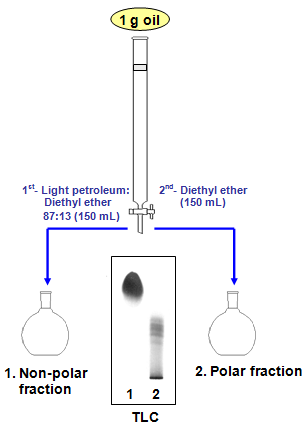 According to the Standard IUPAC Method, 1 g of used frying oil or fat dissolved in the elution solvent (125 mg/mL) is introduced onto a glass column filled with a slurry of silica gel and elution solvent. A chromatographic glass column of 21- mm internal diameter and 450-mm length, and 25 g of silica gel - particle size 0.063-0.200 mm (70-230 mesh) - adjusted to a water content of 5% are used. The elution solvent is a mixture of light petroleum (b.p. 40-60°C) and diethyl ether 87:13 (v/v). Elution of nonpolar compounds, including mostly unoxidized TG, is carried out with 150 mL of the elution solvent and then the polar compound fraction is eluted with 150 mL of diethyl ether. A dropping funnel is used and the flow rate is adjusted to about 2.5 mL/min. Fractions are collected in round bottom flasks and solvents are removed with the aid of a rotary evaporator. Fractions can be dried to constant weight using a stream of nitrogen. The efficacy of the separation is assessed by thin-layer chromatography (TLC). Glass plates coated with silica gel, 0.25 mm layer, and a mixture of light petroleum, diethyl ether and acetic acid 70:30:2 (v/v/v) as developing solvent are used. After plate development and solvent evaporation, the plate is sprayed with a phosphomolybdic acid solution and heated at 120-130°C to visualise spots. As can be observed in Figure 1, an efficient separation is easily checked by confirming that unoxidized TG appear only in the first fraction and the spots of higher polarity can only be seen in the second fraction.

Collaborative tests conducted by the IUPAC demonstrated that the method for determination of polar compounds is exact and reproducible, showing coefficients of variation lower than 5% [3].

Similar good results have been obtained also in our laboratory after slight changes in the analytical procedure, such as replacement of light petroleum by hexane, small increases in the light petroleum:diethyl ether ratio to obtain a sharper separation, a final elution of the column with chloroform to improve recovery of the sample, or exposure to iodine vapours instead of use of phosphomolybdic acid and heat to visualise TLC spots [7].

The content of polar compounds is expressed in weight percentage of the starting oil and is calculated from the weights of the starting sample and nonpolar fraction as stated in the Standard Method or, alternatively, from the weights of nonpolar and polar fractions. Since polar compounds account for all the nonvolatile alteration compounds formed during frying, compounds originating from oxidation at high temperature (oxidized monomeric TG, dimeric and oligomeric TG) and compounds released from hydrolysis (fatty acids and diacylglycerols) are included (discussed here). In particular, dimers and oligomers are the most specific and major compounds in the polar fraction, and their quantitative importance increases with increasing degradation. Therefore, analysis of TG polymers, i.e. dimers plus higher oligomers, by high-performance size-exclusion chromatography (HPSEC) is also an excellent approach to determine alteration in used frying oils, and polymers levels have been found to correlate well with those of polar compounds separated by column chromatography [8].

3.  Standardized Method Based on Minicolumns

For the sake of rapidity and reduced consumption of solvents and silica, the use of mini-columns was suggested [9], and later the IUPAC Commission decided to adopt the method [10]. The mini-column used is 10-mm internal diameter and 150-mm length, the oil sample is 0.5 g and the slurry consists on 5 g silica gel in about 10 mL of the elution solvent. Nonpolar and polar reactions are eluted with 60 mL of elution solvents and flow rate is adjusted to about 1.5 mL/min. The rest of the conditions are the same as those in the Standard IUPAC Method 2.507. Results from two collaborative studies, the first following the Standard Method 2.507 and the second one using the silica mini-columns, showed that, as expected, the higher the initial weight sample, 1 g for the Standard Method 2.507 and 0.5 g for the mini-column method, the lower was the standard deviation, as both methods are based on a gravimetric determination. However, the coefficient of variation for repeatability by using mini-columns was as low as 2% for a sample with about 30% polar compounds and 10% for the sample with the lowest content of polar compounds (3%).

Miniaturised methods, applicable to sample amounts below 100 mg and based on the use of solid-phase extraction (SPE) cartridges, have been proposed [11,12], but levels of accuracy and precision are expected to decrease for such low sample amounts, especially in samples with low levels of polar compounds.

However, when SPE is combined with HPSEC and addition of an internal standard, quantitative results significantly improve, as proposed in the analytical procedure developed in our laboratory [13]. It consisted of adding monostearin as internal standard and analysing the polar fraction by HPSEC. This is useful not only to determine the content of polar compounds but also to quantify different groups of compounds in the fraction. In this regard, combination of classical columns-HPSEC [7], micro-columns-HPSEC [10] and SPE-HPSEC [13] will be described in another web document.

As an illustrative example of the application of polar compounds determination, Figure 2 shows the evolution of polar compounds in conventional sunflower oil and high-oleic sunflower oil during continuous and discontinuous frying [15]. Similar conditions of temperature (175°C), initial surface-to-volume ratio (0.3 cm-1) and total heating time (6 h) were applied. Differences between oils are expected from the different degree of unsaturation since the tocopherol contents were similar (620-650 mg tocopherols/kg oil). Remarkably high differences were found due to the frying process, attributable to the greater protection of the oil surface in continuous frying because of the constant presence of steam from water in the fried food. 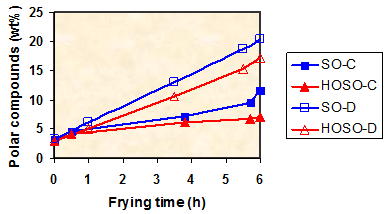 Determination of polar compounds by adsorption chromatography provides the most complete measure of the degradation level of used frying oils and fats, as it consists of the global quantification of the major alteration compounds formed. The method serves as the basis for limiting degradation of used frying oils and fats for human consumption in most national and international regulations, and it is extensively applied in both research and quality control laboratories.