Monomeric cyclic fatty acids with an internal ring structure are formed, mainly from linoleic and linolenic acids, during heating of vegetable oils at temperatures of 200°C and above. Such temperatures are reached when foods are fried and during the refining of oils, especially in the deodorization step. After ingestion in food, fatty acids of this kind can be absorbed from the intestines and metabolized within tissues. Although the concentrations of cyclic fatty acids in heated oils are low (about 50 ppm), they were long believed to have potent biological effects. More recent nutritional studies with highly purified preparations of cyclic fatty acids have cast doubt on these findings, as discussed in a separate document in this website.

During cyclization one of the double bonds is lost, so that the cyclic fatty acids isolated from sunflower oil are monoenoic while those from linseed oil are mostly dienoic acids, reflecting the sources as linoleic and linolenic acids, respectively. These fatty acids are now known to contain five- and six-membered rings, with two substituents – one containing the carboxyl group and the other a hydrocarbon chain. Double bonds can be located within the rings or in either of the alkyl chains. While there may be a limited range of basic carbon skeletons with five- and six-membered rings in a finite number of positions, stereomutation of double bonds may occur giving products of the cis and trans configuration. Also, there is an approximately equal probability of formation of cis and trans isomers of substituents about the rings. Each basic component gives rise to four stereoisomers, and these can appear as a complex array of overlapping peaks on analysis by gas chromatography, for example. The nature of these acids and procedures for their analysis have been reviewed [1,2].

In brief, our successful approach to a comprehensive determination of the structures and relative proportions of each of the cyclic fatty acids involved a preliminary separation of the cyclic fatty acid mixture (as phenacyl ester derivatives) by silver ion high-performance liquid chromatography (HPLC) into several fractions according to degree of unsaturation, the size of the ring and the position and configuration of the double bonds. Then the fractions were each examined by gas chromatography-mass spectrometry as their picolinyl ester and/or 4,4-dimethyloxazoline (DMOX) derivatives. This is discussed in a separate document on this website.

Mass spectrometry of DMOX derivatives was especially helpful in analysing the dienoic fatty acids produced by cyclization of α-linolenate (in linseed oil, heated at 275°C under nitrogen). Perhaps surprisingly, these were simpler in composition than were the monoenes derived from linoleate, at least in relation to the essential molecular skeletons. Four basic structures only were present in significant concentrations as illustrated in Figure 1. Each has a ring structure with one double bond in the ring and one in the aliphatic chain. Two of these isomers (50% of the total) contain cyclohexene rings and two have cyclopentene rings with the double bond in the ring being between carbons 12 and 13 of the original fatty acid chain in every instance. Determination of the position of the double bond in the ring is not easily accomplished by mass spectrometry alone, but that in position 12 of the cyclohexene ring gives a specific ion that is diagnostic. 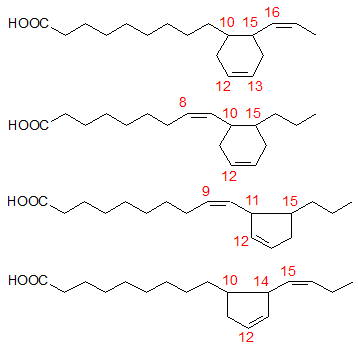 The six-membered ring was formed in each case by cyclization between carbons 10 and 15 of the original fatty acid chain, i.e. from the first to the third double bond or vice versa, as shown in Figure 2. The five-membered rings were formed in a similar way by cyclization from carbons 10 and 15 to carbons 14 and 11, respectively. No cyclization occurred in a direction away from the double bond system. There was a slight preponderance of products formed by cyclization from carbon 15 in comparison with those from carbon 10. In geometrical isomerization induced by heating, the double bond in position 15 of linolenic acid appears to be more reactive than that in position 12 also [7].

Figure 2. Carbon atoms involved in the cyclization of α-linolenate.

With the cyclohexenyl fatty acids, the double bond in the aliphatic chain moved from position 9 or 15 to 8 or 16, respectively, and cis-trans isomerization occurred. Of these isomers, 83% had a trans-double bond, i.e. close to the point of thermodynamic equilibrium, suggesting that isomerization occurred as part of the cyclization process. In contrast, the double bonds in the aliphatic chains in the cyclopentenyl fatty acids remained in their original positions, i.e. 9 or 15. Although stereomutation occurred here also, there were similar proportions of the cis and trans isomers. Much more stereoisomerization occurred during the formation of cyclic dienes than with cyclic monoenes. Similarly, cis and trans isomers about the rings were present in approximately equal amounts.

Thus, the four basic structures result in sixteen isomers - two configurational isomers about the double bond and two about the ring structure for each.

Working with identical samples, similar results were obtained by Mossoba and colleagues in the USA (reviewed elsewhere [1,2]), although we do not agree with all their proposed structures. In particular, we have not been able to detect cyclic fatty acids with conjugated double bond systems.

An analogous range of cyclic fatty acids were formed from γ-linolenic acid, when evening primrose oil was heated under simulated frying conditions [8].

The complex mixture of cyclic monoenes formed in sunflower oil, heated at 275°C under nitrogen, was analysed by GC-MS after a preliminary separation, as for the cyclic dienes [4]. The structures of a wide variety of different cyclopentenyl, cyclopentyl and cyclohexyl fatty acids were revealed, although no cyclohexenyl fatty acids were present, surprisingly. Only the position of the double bond in the ring presents difficulties for mass spectrometry, although in some instances this problem can be solved by deuteration and GC-MS. Some of the structures found are illustrated in Figure 3.

Figure 3. Some of the fatty acids produced during cyclization of linoleate.

In each instance, one of the carbons of the original double bond was involved in the cyclization process, and the carbons atoms involved are illustrated in Figure 4.

Figure 4. Carbon atoms involved in the cyclization of linoleate.

Cyclopentenyl fatty acids were formed when cyclization occurred from one double bond in the direction of another, while both cyclopentyl and cyclohexyl fatty acids were formed when cyclization proceeded in a direction away from an existing double bond. The reaction could use either double bond with equal facility. The double bond in the cyclohexyl fatty acids has predominantly the trans configuration, suggesting that this has some effect on the mechanism of the reaction and the formation of these products. Stereomutation of double bonds in general did not occur to an appreciable extent. However, cis and trans isomers of the ring substituents tended to be formed in approximately equal extents. Although it was reported that only single isomers were formed in some instances, it now appears likely that this was erroneous as it was simply not possible technically to separate all the possible isomers by GC.

In addition, a range of saturated bicyclic fatty acids were isolated by silver ion HPLC and characterized in part [5]. They appeared to be formed from the cyclic monoenes by formation of a bridge across a cyclopentene or cyclohexene ring. Two of the structures are illustrated in Figure 5 (it is not possible to be certain of the exact bridge points).

Prior to our work, it was not recognised that cyclic monomers could also be produced from oleate in heated oils. Heating high-oleate sunflower oil under conditions used to generate such compounds from other oils produced a small, saturated monocyclic fatty acid fraction, which must have been generated from oleate (with loss of the double bond during cyclization) [6].

Figure 6. Carbon atoms involved in the cyclization of oleate.

The first plausible mechanism to be proposed for the formation of cyclic fatty acids in heated oils involved a free radical reaction [4]. However, if this were indeed to operate, it would probably produce more isomers than were in fact found. A recent publication by Destaillats and Angers [9] suggests an explanation that is more likely, i.e. thermally induced {1,6}- and {1,7}-prototropic migrations. As an illustration, the mechanisms for formation of two of the isomers from α-linolenate are shown in Figure 7. Thus, reaction of carbon C-10 with C-14 results in the formation of a five-membered-ring by a pericyclic rearrangement. The resulting cyclopentenyl compound may then in turn undergo a sigmatropic rearrangement with double bond migration and structural reorganization to form a six-membered ring with a double bond between carbons 12 and 13. The mechanism correctly predicts the stereochemistry of the new double bonds in each case.

Figure 7. Proposed mechanism for the formation of cyclic fatty acids from α-linolenate.

Similar mechanisms are proposed for the formation of cyclic fatty acid monomers from eicosapentaenoic and docosahexaenoic acids during the deodorization of fish oils [10].