During frying of foods, the frying fat is subjected to high temperatures in the presence of air and water, which results in the formation of a high number of new compounds through thermal, oxidative and hydrolytic reactions. The occurrence of hydroperoxides, the primary oxidation compounds, is very limited due to their great instability at high temperatures. From them, a wide range of secondary oxidation products are formed amongst which polymeric compounds stand out.

An important route for formation of new compounds is breakdown of hydroperoxides giving rise to volatiles and short-chain compounds attached to the glyceridic backbone forming part of nonvolatile molecules. Whereas the volatiles are largely removed from the oil during frying and have implications in the flavour of both the frying oil and the fried food, the nonvolatile compounds remain in the frying oil and are absorbed by the food, modifying the oil nutritional and physiological properties. These compounds, such as core aldehydes, are easily absorbed in the intestinal tract after hydrolysis by pancreatic lipase. Furthermore, some reports on 9-oxononanoic acid, the major short-chain glycerol-bound compound originally bound to the triacylglycerol molecule in used frying fats and oils, indicate that it could induce lipid peroxidation and affect hepatic metabolism [1,2].

Our approach to a comprehensive determination of short-chain bound compounds involved the previous derivatization to fatty acid methyl esters and later analysis by gas chromatography-mass spectrometry. These methods have enabled us to determine the structure and amounts of the short-chain bound compounds in model systems of methyl oleate and linoleate, therm-oxidized oils and used frying fats of different levels of degradation [3-5]. As for the volatiles, their analysis involved their initial concentration and later analysis by gas chromatography-mass spectrometry [6,7].

There is a general acceptance on the mechanism of formation of short-chain compounds from the hydroperoxides formed through autoxidation reactions. They are originated by homolytic β-scission of the alkoxy radicals coming from allylic hydroperoxides. Homolytic β-scission takes place on both sides of the alkoxy carbon through route A or B (Fig. 1). Through this mechanism two types of aldehydes (volatile aldehyde and esterified aldehydes) and an alkyl or alkenyl radical are produced. Further interaction of alkyl and alkenyl radicals with other low molecular weight radicals present in the oil (H· and OH·) contributes to their stabilisation to form alcohols, and hydrocarbons. In summary, β-scission from allylic hydroperoxides clearly favours the formation of aldehydes, either esterified or not, as the concurrent radicals formed need a further stabilization with H· and OH·, in competition with other radicals of high molecular weight. In a second step, the short-chain unsaturated compounds formed may undergo oxidation through the same routes. 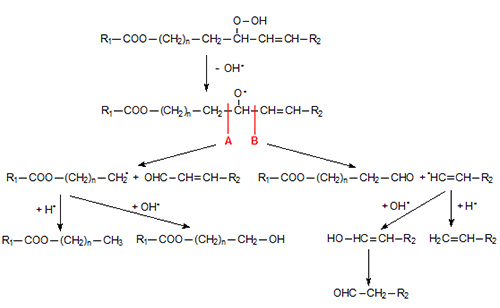 Due to the limited degree of unsaturation of the oils and fats used for frying, oleic and linoleic are the two main unsaturated fatty acids undergoing degradation, and the expected volatile and short-chain bound compounds are those coming from their major hydroperoxides. In the case of oleic acid, initial hydrogen abstraction in the initiation reaction of autoxidation occurs at the allylic carbon-8 and carbon-11 to give two delocalized three-carbon allylic radicals. The further reaction with oxygen produces a mixture of four allylic hydroperoxides containing the hydroperoxy groups on carbons 8, 9, 10 and 11. In the case of linoleic acid with two double bounds separated by a methylene group, hydrogen abstraction is more favoured because there is a methylene group that is doubly activated by two adjacent double bonds. Hydrogen abstraction takes place at the carbon-11 position, giving rise to a hybrid pentadienyl radical effectively stabilized by resonance, which reacts with oxygen at the carbon-9 and carbon-13 positions to produce a mixture of two major conjugated diene 9- and 13-hydroperoxides. Thus, the expected volatile and short-chain bound compounds are those coming from the six major hydroperoxides from oleic acid and linoleic acid and their relative proportions depends on the fatty acid composition of the frying oil.

The major compounds expected according to the scheme in Figure 1 are shown in Tables 1 and 2 for volatiles and esterified compounds, respectively. As can be observed, the same short-chain bound compounds are obtained from 9-hydroperoxide of both fatty acids due to their identical saturated chain before the first double bond between carbon-9 and carbon-10. Consequently, the major compound expected is 9-oxononanoate due to its direct formation as compared to octanoate and 8-hydroxyoctanoate, which need a further interaction with other radical for their formation.

There are many reports on the compounds responsible for the flavour of fried foods. For instance, it appears that the desirable flavour of fried potatoes arises from the alkyl pyrazines, alkyl thiophenes and alkylthiazoles produced through the reactions of amino acids, sugars and lipids and their breakdown products.

The qualitative composition of the volatiles formed by lipid autoxidation is described in a limited number of studies where oils and fats are thermoxidized in the absence of foods. A complex mixture of compounds of different structure and polarity including hydrocarbons, alcohols, ketones, lactones, aldehydes, acids, etc. is obtained [7] among which those included in Table 1 are major compounds [6] and most of the others are formed from them in a secondary step. As commented above, volatiles are removed at the high temperatures of the frying process and the composition of volatiles depends on both fatty acid composition and the level of alteration of the oil analysed. Unfortunately, due to the nature of the volatile fraction and to the different concentration techniques used, quantitative gas chromatography results are difficult to obtain and they are normally expressed as percentages of the total chromatographic area. The six aldehydes obtained by route A (hexanal, 2,4-decadienal, octanal, nonanal, 2-decenal and 2-undecenal) are always present in the volatile fraction suggesting significant oxidation of oleic and linoleic acid even in oils rich in linoleic acid. Among them, 2,4-decadienal is considered the major contributor to deep-fried flavour. As expected, a high proportion of octanal, nonanal, 2-decenal and 2-undecenal is found for oils rich in oleic acid, i.e. olive and palm oil.

Finally, it is worthy of comment that all the compounds obtained are those also present in oils and fats oxidised at room temperature during storage and contributing to rancid odour. Thus, a lot of work remains to be done to establish the relationships between pleasant or undesirable perception, highly related to odour threshold values, and concentration and interactions of the different compounds in the complex mixture of volatiles.

Unsaturated compounds as well as saturated hydroxy compounds, when detected, were in much lower amounts. There are several reasons for these results. On one hand, scissions to give alkenyl radicals are energetically less favourable because the bond dissociating energy required for the formation of a vinyl radical is larger than that needed for the formation of an alkyl radical. This fact would justify the low amounts of unsaturated bound compounds joined to their further susceptibility to oxidation through the same autoxidation route (Fig. 1). On the other hand, as temperature increases, the solubility of oxygen decreases drastically although all the oxidation reactions are accelerated. Thus, at frying temperature, the oxygen pressure is low, the initiation reaction previous to the addition of oxygen becomes more important, and the concentration of hydrogen radicals is higher than that of hydroxyl radicals, favouring the formation of short-chain as opposed to short-chain hydroxy fatty acid methyl esters. In addition, the hydroxyl group is also susceptible to undergo further oxidation to aldehyde and acid groups.

Quantitative data for short-chain bound compounds have been obtained for olive and sunflower oils heated at frying temperatures for different periods. Of special interest are the contents when the samples showed alteration levels around the limit established in most European countries for human consumption of used frying oils (25% polar compounds). At this point, the total content for the six bound compounds was similar for both oils, 2.64 and 2.88 mg/g oil for olive oil (22.8% total polar compounds) and sunflower oil (26.6% total polar compounds), respectively. Interestingly the major compounds were short-chain fatty acid methyl esters [6]. These results are attributed to further reactions of the major aldehydic compounds to acids, while the saturated short-chain FAME accumulate due to their high stability. In fact, the sum of methyl heptanoate and octanoate has shown high correlation to the total content of polar compounds and accordingly proposed as a good indication of the total alteration level in frying oils [8]. Even more, the octanoate/heptanoate ratio depended on the degree of oil unsaturation, being much higher for the sunflower oil with a high content of linoleic acid. Also, such a ratio decreased with heating time in both oils indicating a more significant contribution of the heptanoate derived from the 8-hydroperoxide of oleic acid and thus providing evidence of a more significant participation of oleic acid as the level of alteration increased. Similar results were obtained for used frying oils of unknown history [6].