The title of this article is one of the questions asked most frequently by newcomers to lipid analysis. The manufacturers' literature can be confusing if not actually in error at times, and certainly the advice given is never objective. It is impossible for me to describe or review the various types of column available from individual manufacturers or even to name them all, as we have only been able to try out a relative few in our work. If I mention a particular column from one manufacturer, it should not be taken as an unqualified endorsement of that product - simply because I have not tried all the competition. Readers can find further information in my online book Gas Chromatography and Lipids or in Lipid Analysis (4th edition) [1].

I will start by assuming that I need consider narrow-bore fused-silica columns only nowadays. They are robust and with care they will last for one to two years, while affording high resolution and low adsorptivity (quantitative recovery). Although it may be tempting for anyone new to the technique to purchase columns of 50 metres in length in order to obtain the maximum resolution possible, excellent results can be obtained with columns of 10 or 25 metres with most samples. One advantage of shorter columns indeed is that analysis times can be appreciably reduced, so that more samples can be analysed in a given time. For analytical purposes, the internal diameter of the column should be 0.2 to 0.3 mm, though columns of 0.1 mm appear promising. There are reports in the literature of very short analysis times (3-7 min) being used, but it seems to me that this is only of value in a few circumstances as the time taken to analyse the data may be much greater than the gas chromatography (GC) run time.

The liquid phases in use for the GC analysis of methyl ester derivatives of fatty acids are almost exclusively polar polyesters, although a few applications for thermally stable non-polar silicone phases remain. With the latter, unsaturated components are eluted before the saturated fatty acids with the same chain-length, while the reverse is true of polar phases. Polyesters can be classified according to their degree of polarity, and in current practice only two main types need be considered, i.e. those of low to medium polarity such as those of the Carbowax (polyethylene glycol under various trade names) type, and those of high polarity, such as CP-Sil 88™, BPX70™, or SP-2340™. Cross-linking or bonding to the support does not appear to affect relative retention times greatly, although it does have a marked effect on column stability. The high efficiency inherent in the use of capillary columns has meant that the resolving power of the phase itself is often of lesser importance than it was with packed columns.

Changing the polarity of a polyester phase does not change the order of elution of components within a given chain-length group, but it can affect the elution order relative to components of other chain lengths as indicated in Figure 1. As mentioned briefly above, unsaturated fatty acid derivatives elute before the corresponding saturated on non-polar silicone phases, and resolution may not be adequate, e.g. 18:2(n-6) and 18:3(n-3) may elute together, and indeed in some instances the normal order can be reversed. 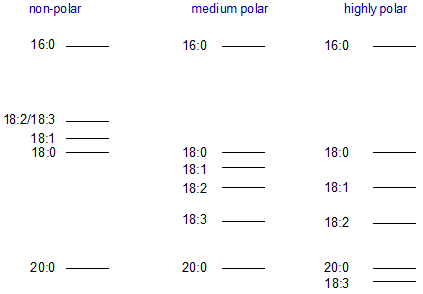 Thus, it is possible to eliminate the difficulties with overlapping components of different chain-lengths by using polyester liquid phases of low-polarity. The author has favoured columns of fused silica coated with phases of the Carbowax type for the analysis of fatty acids of animal origin, as this appeared to give satisfactory resolution of all the important polyunsaturated fatty acids with no interference by components differing in chain-length by two carbon atoms, at least in the important C18 and C20 regions. For most practical purposes, positional isomers of unsaturated fatty acids are well resolved. Ackman [2] has proposed that phases of the Carbowax 20M™ type "should be utilized in the 'standard' reference WCOT column for inter-laboratory studies as well as for application in its own right". For the moment and until any new phase with demonstrable advantages is introduced, this suggestion seems eminently sensible and it has my full support. We use a 25 metre column (0.25 mm i.d.) of this type for all our routine analysis of clinical, seed oil, and fish oil samples. This should be the first column anyone should buy for fatty acid analysis.

Lipid analysts soon acquire an intuitive understanding of the relationship between the retention times of peaks on a GC trace and their identity. For example, a typical fingerprint of the fatty acids from animal tissue phospholipids on a column of the Carbowax type would have the 16:0 component standing in relative isolation, followed by the three peaks for the C18 components (18:0, 18:1 and 18:2), then a gap to the next substantial peak for 20:4(n-6), followed by a further gap to the C22 components, the last of which is 22:6(n-3). Many of the minor peaks can be identified tentatively according to their proximity to these major components.

I will not recommend any particular manufacturer as we have had satisfactory results from various types over the years, and suppliers are constantly refining and improving their manufacturing processes.

For gas chromatography-mass spectrometry (GC-MS) purposes, we require a column of the Carbowax type with the minimum possible bleed characteristics, and we have found that a Supelcowax™ 10 column has given satisfactory results over several years (though other manufacturers are now paying greater attention to this aspect of performance).

With columns of the highest polarity (e.g. CP-Sil 88™, BPX70™, or SP-2340™), excellent resolution is obtained, especially of positional or geometrical isomers. Manufacturers tend to give prominence to these high polarity phases in their literature and recommend them for routine fatty acid analysis. I strongly disagree. Their principle disadvantage is that there is some overlap of fatty acids of different chain lengths, and the nature and extent of the problem can be rather sensitive to column temperature or the temperature gradient [3]. For example, it is possible to change the order of elution of 20:1 and 18:3(n-3) fatty acids by modifying the column temperature. This does not appear to be a significant problem with columns of the CarbowaxTM type.

The inherent resolving power of highly polar columns columns is such that there may be few problems of actual overlap of major components. On the other hand, a multiplicity of peaks with minimal biological significance can be revealed, so compounding the identification problems. Such columns are essential for analysis of lipids containing trans fatty acids or for isomers of conjugated linoleic acid. Then, 100 metre columns are often recommended and indeed may be essential. In Europe for many years, CP-Sil 88™ seemed to be preferred, while the SP-2340™ stationary phase was favoured in the USA, presumably simply for reasons of relative availability. Newer phases from the same manufacturers may now be taking their place

Again, for GC-MS of fatty acid derivatives, where we require a column of this type with the minimum possible bleed characteristics, a BPX70™ column is our standard, as it was the first column on the market with the desired properties. Other suppliers may have suitable columns now.

Finally we have a place in our laboratory for a column coated with a low polarity silicone phase, because of its high thermal stability with negligible bleed characteristics. Such columns lack the resolution of phases of higher polarity, but are adequate for many purposes especially when GC-MS is in view. We use it for fatty acids of longer than usual chain-length (especially as picolinyl esters), for fatty acids with polar functional groups, e.g. hydroxyls, and for other lipids of high molecular weight, including sterols and waxes. A column of this type is essential when trimethylsilyl ether derivatives are analysed, as excess derivatizing reagent can interact with polar stationary phases.

As a practical point, the working lives of columns can be prolonged if they are used fairly continuously and not removed from the instrument. This seems to be especially true of the highly polar phases, especially in 100 metre lengths. The latter are often made as two 50 metre columns coupled together, and the coupling appears to be rather fragile in our experience; it is especially sensitive to physical handling (installing and removing from a GC oven) and to temperature extremes. In view of the high costs of such columns, analysts should be aware of the problem. When a column is not in use, the flow of inert carrier gas should be maintained and the column held at a temperature of 40-50oC.

To summarize, I recommend a 25 metre column of the Carbowax type as the standard for routine fatty acid analysis. A highly polar column (100 m) may be required for trans fatty acids and other specialized samples. Other columns may be required for GC-MS and certain other purposes, and a non-polar phase especially has many uses.

This article has been updated appreciably from one by the author that first appeared in Lipid Technology, 12, 114-115 (2000) (by kind permission of P.J. Barnes & Associates (The Oily Press Ltd), who retain the copyright to the original article).