Selected Topics in the Analysis of Lipids

Methods for the structural characterization of fatty acid methyl esters (FAME) by mass spectrometry (MS) are restricted to a few techniques that are rare in modern MS laboratories. The utility of many of these methods for identifying double bond position is limited. Conventional electron impact (EI) MS with 70 eV electrons yields peaks that are mostly not specific to structure because of diffuse charge localization that drives rearrangements and fragmentation. A solution to the charge localization problem is the conversion of FAME to dimethyloxazoline (DMOX) or picolinyl esters, discussed elsewhere in the Lipid Library. The strong charge-localizing properties of the derivative group yield many low-abundance ions that are indicative of single and double bonds. Each derivative requires its own chromatography conditions and in addition the lower molecular weight esters have lower volatility than FAME. The necessities of different derivative chemistry and chromatography are inconvenient for most labs, and the differing retention times of FAME versus the corresponding DMOX or picolinyl derivative can make matching minor components impossible. Moreover, the large number of low-abundance fragments that are not characteristic of a particular fatty acid makes selected ion monitoring nearly impossible.

Covalent adduct chemical ionization (CACI) MS was developed as a convenient and rapid method for unequivocal identification of FAME double bond structure without the need for prior chemical rederivatization. An acetonitrile-derived reagent ion interacts with the double bonds of FAME and subsequent fragmentation yields a small number of predictable peaks that are indicative of double bond location for most FAME. The well established patterns of FAME fragmentation in CACI MS and tandem MS enable an interpretation and, in most cases, allow structures to be determined without the need for comparison against known standards.

Key practical advantages of CACI MS/MS for FAME analysis over rederivatization methods include:

Acetonitrile (CH3CN, m/z 41) maintained under CI conditions yields the expected dominant ions, m/z 40 (CH2CN+) and m/z 42 (CH4CN+), as well as an additional ion at m/z 54, appearing as a decomposition product from the reaction of acetonitrile with an ion of itself. The m/z 54 ion is formed from the net transfer of a CH3 and yields (1 methyleneimino) 1 ethenylium (MIE), with the structure CH2=C=N+=CH2. This ion reacts rapidly with double bonds of FAME and produces an ion 54 Da above the mass of the parent FAME, referred to as the [M+54]+ ion. Mechanistic studies have determined that MIE forms a four-membered heterocyclic ring with monoenes and homoallylic polyenes, and a six-membered ring structure with conjugated dienes (Van Pelt et al., 1999). 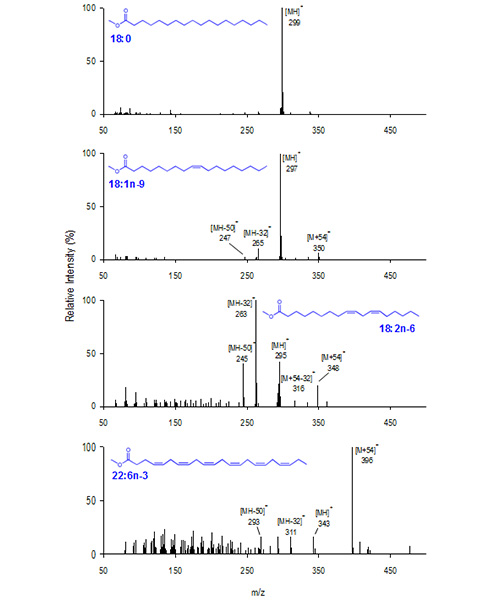 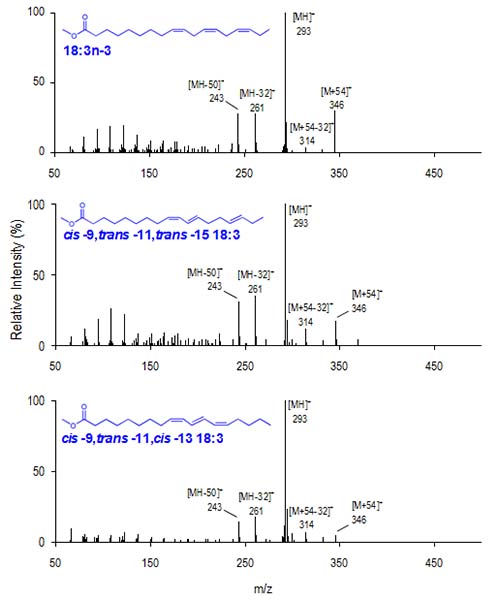 The position and in special cases, geometry, of double bonds is found in the collisional dissociation products of the [M+54]+ ion, formed during the second stage of MS (MS/MS or MS-2). The [M+54]+ ion yields two product ions, of high abundance depending on collision conditions, that are characteristic of double bond structure in all homoallylic FAME. They carry the carboxyl or terminal methyl carbons and are referred to as the α and ω ions, respectively.

The principal is illustrated in Figure 4 for two isomeric monoenes, Me-trans-11-18:1 and Me18:1n-9. MS-1 spectra of the two monoenes produce identical spectra with the four ions characteristic of FAME. MS-2 of the isolated [M+54]+ ion yields different ions that are diagnostic of structure: The trans-11 isomer yields m/z 280 and 180 for α and ω ions, respectively, while the n-9 isomer yields m/z 252 and 208.

Figure 4. MS-1 and MS-2 of [M+54]+ for two monoene isomers, trans-11-18:1 and Me18:1n-9. MS-1 spectra are indistinguishable, despite the different double bond geometry. Diagnostic ions specific to each isomer are found in the MS-2 spectra. Numbers inside the horizontal line fragment designations reflect the mass of the parent ion fragment, while the numbers outside the lines are the actual fragment masses considering addition of 54 Da, plus or minus 1 for a H transfer. 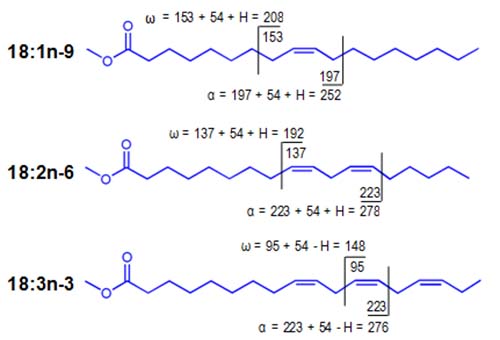 Figure 5. Rules for the formation of α and ω diagnostic ions from homoallylic FAME in CACI MS/MS

Figure 6 shows CACI MS-2 spectra for a triene, tetraene, and hexaene to illustrate the commonality in polyene spectra. The α and ω diagnostic ions result from predictable fragmentation, and data for the ions corresponding to specific homoallylic FAME structures appear in tabulated form here in .pdf format. 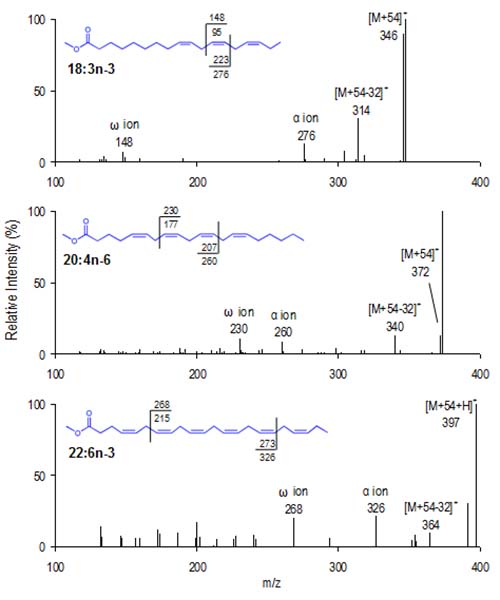 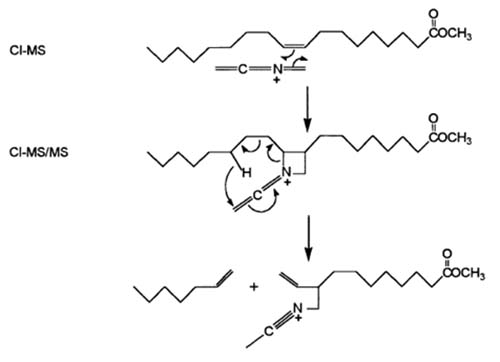 Figure 7. Reaction of MIE with a monoene, with subsequent dissociation to form the α-diagnostic ion. 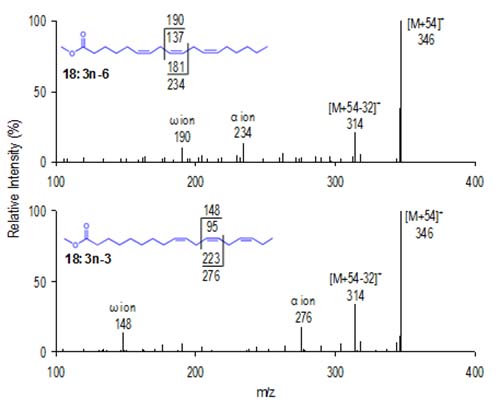 Figure 9 presents MS-2 spectra for γ-18:3 and α-18:3. As the homoallylic triene double bonds shift between the ω3 and ω6 positions, both diagnostic ions shift and enable facile identification of the two isomers.

Quantification of individual trans fatty acids by conventional gas chromatography is complicated by the incomplete separation of coeluting isomers, thus requiring long temperature programs. CACI-MS/MS monitoring of diagnostic ions provides unique advantages for separations and quantitative analysis of FAME. Here, diagnostic ions can be used to quantify individual 18-carbon cis and trans isomers in MS/MS with a short temperature program (Brenna, 2005), and the [M+54]+ ion for 18:1 is isolated and collisionally dissociated. Figure 10 presents MS-2 spectra for four monoene FAME and shows that they yield unique diagnostic ions suitable for plotting and quantification. 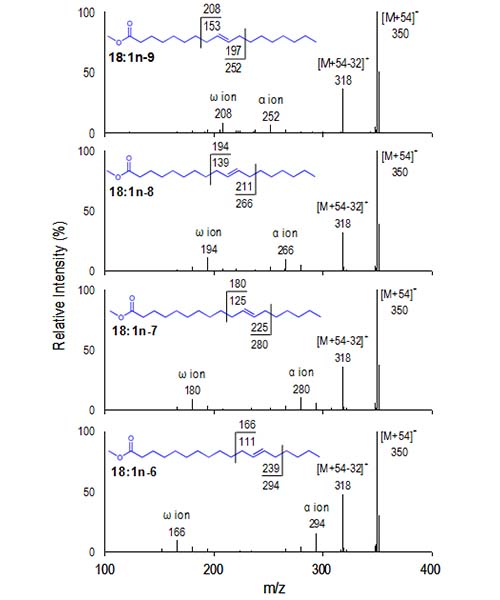 Figure 10. CACI MS-2 spectra of four selected 18:1 isomers. Diagnostic ions are unique for individual isomers and thus can be summed and plotted to reconstruct a structure-specific chromatogram.

Figure 11 presents plots of reconstructed ion chromatograms based on diagnostic ions for various monoene isomers found in partially hydrogenated vegetable oil. For this sample, two peaks are found for all isomers, with the trans peak appearing at lesser retention time than the cis isomer. Because each isomer contains one double bond, detection sensitivity is similar among isomers. Peak areas for the diagnostic ions of individual FAME isomers are plotted, quantified and taken as a proportion of the total peak area. 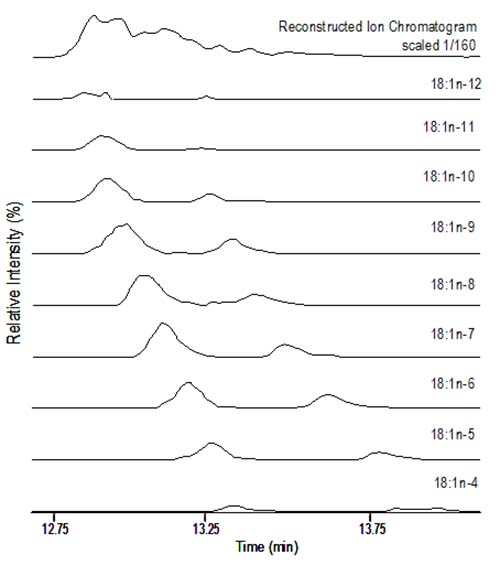 About 30 CLA isomers have been identified in the milk and meat of ruminant animals, with cis-9,trans-11-18:2 and trans-7,cis-9-18:2 being the most abundant. Identification and resolution of CLA by conventional gas chromatography has proven to be a great challenge due to the wide range of isomers and small structural differences among them.

CLA are particularly amenable to analysis by CACI-MS/MS (Michaud et al., 2003). Similar to homoallylic dienoic FAME, fragmentation of CLA in MS-2 occurs allylic to the double bonds, and the mass spectra yield α and ω diagnostic ions indicative of double bond position. Surprisingly, the ratio of the α and ω ions (i.e. α/ω ratio) reveals the geometry of the double bonds, with the fragment arising from cleavage adjacent to the trans bond more prominent than the fragment adjacent to the cis bond. Thus, cis-trans isomers give an α/ω ratio ≥ 4 while trans-cis isomers yield a ratio less than 1.0. MS-2 mass spectra for cis-9,trans-11-18:2 and trans-9,cis-11-18:2, with α/ω ratios of 5 and 0.4, respectively, are presented in Figure 12. CLA isomers of common geometry, cis/cis and trans/trans isomers, yield similar α/ω ratios and cannot be distinguished by MS-2 alone. Informal observations are that they can be distinguished by the MS-1 [M+54]+/MH+ intensity ratios, where the trans-trans isomer is formed at greater relative abundance than the cis-cis isomer (Lawrence and Brenna, 2005). 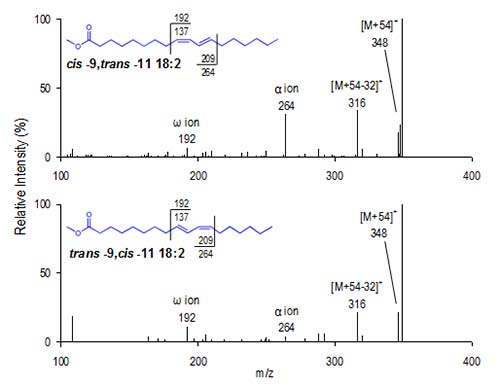 CACI positional assignment in polyene NMI-FAME spectra is more complex, in part because numerous [M+54]+ isomers with coupled dissociation pathways may be present. Conjugated polyenes, FAME with double bond systems isolated by more than one –CH2–, and triple-bond containing FAME all give unique fragmentation, with a few exceptions (Lawrence and Brenna, 2005, Gómez-Cortés et al., 2009). Conclusive structural evidence for a unique structure for these FAME is best accomplished with standards.

Importantly, however, the absence of MS-1 and MS-2 fragments indicative of homoallylic or CLA FAME rules out these common structures. Comparison with existing reference spectra and application of the fragmentation rules developed for simple double bond systems enables identification by interpretation.