Abstract: Although gas chromatography is the predominant technique used for fatty acid analysis, high-performance liquid chromatography has an important role to play in applications such as the handling of less usual samples, avoidance of degradation of heat-sensitive functional groups, and for micropreparative purposes. Several approaches for development of improved methods are suggested, especially for reversed-phase applications.

There can be little doubt that gas chromatography (GC) is the only technique that need be considered for routine analysis of most fatty acid samples. The flame-ionization detector is robust and has an enormous dynamic range, so accurate quantification is rarely a problem. Therefore, is there any place for high-performance liquid chromatography (HPLC) for the analysis of fatty acids? The answer is an undoubted yes, perhaps not for mainstream samples but certainly for the less usual. A major advantage can be that HPLC operates at ambient temperature so there is relatively little risk to sensitive functional groups. It should also be remembered that HPLC is not merely an analytical technique, but can be used equally easily for micropreparative purposes. For example, it is easy to collect fractions for analysis by other techniques such as by chemical degradation or by mass spectrometry (MS) [1] or nuclear magnetic resonance spectroscopy [2]. Indeed, direct analysis by HPLC-MS with electrospray ionization may offer an advantage in terms of sensitivity.

HPLC on columns of silica gel can be used for the analysis or isolation of fatty acids with polar functional groups, especially oxygenated moieties such as hydroperoxides. With care, isomers differing in the position of hydroperoxy or hydroxy groups on an aliphatic chain can be separated [3].

Fatty acids containing enantiomeric functional groups, and hydroperoxy or hydroxy groups especially, can be resolved on a variety of commercial chiral stationary phases [4]. This is probably still the realm of the specialist, but it is extremely important in, say, pharmaceutical chemistry. Chiral separations are also possible by GC, but they appear to be less efficient in general.

This is a topic dealt with elsewhere in this website and as a major topic in its own right and in our mass spectrometry pages, so I will mention only a few brief applications. In my laboratory, we used the technique frequently to simplify complex mixtures of fatty acids in order to make it easier to confirm the identities of fatty acids by GC-MS. It would be my method of choice for quantitative separation of cis and trans fatty acids for further detailed analysis and quantification by GC. Finally, it is possible to separate positional and geometrical isomers of some unsaturated fatty acids on analytical and micropreparative scales in ways no other technique can match.

An enormous number of papers have appeared on the topic of HPLC analysis of fatty acids by reversed-phase HPLC, most of which have not advanced knowledge to any significant degree. We are indebted to Boryana Nikolova-Damyanova for reviewing the topic and bringing a critical eye and some sense to it [5].

The principles of the separation are well known, and the instrumentation is straightforward. The stationary phases used are almost exclusively of the octadecylsilyl ("ODS") type, with an octyl phase being recommended occasionally as an alternative. The mobile phase is either acetonitrile (mainly) or methanol containing some water. If free fatty acids are analysed, a little acetic acid can be added to ensure sharp peaks. These solvents are transparent to UV light at 205 to 210 nm, so UV detection at such wavelengths can be employed. However, much greater sensitivity is possible if phenacyl or related derivatives of fatty acids are prepared for detection at higher wavelengths. Then, the detector responds only to the ester moiety giving a quantitative molar response. Astonishing sensitivity is obtainable, down to femtomole levels, by using specific derivatives with fluorescence detection although quantification then presents problems. HPLC-MS with electrospray ionization can also be extremely sensitive, while giving structural information on components [6].

In reversed-phase HPLC, fatty acids are separated both by chain length and by degree of unsaturation. The first double bond reduces the effective chain length by a little less than 2 carbon units, so an 18:1 fatty acid elutes just after 16:0. A second and further double bonds have smaller effects on retention so an 18:3 fatty acid elutes just before 14:0, for example. A separation of a standard mixture of fatty acids, as phenacyl esters, is illustrated in Figure 1 [7]. 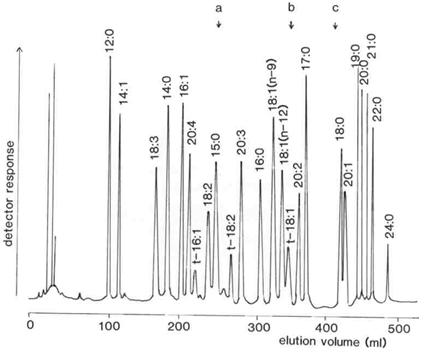 Figure 1. Separation of a standard mixture of fatty acids in the form of the phenacyl esters by reversed-phase HPLC with spectrophotometric detection at 254 nm [7]. The column (900 × 6.4 mm) was packed with µBondapak™ C-18, and was eluted with acetonitrile-water in the proportions 76:33 (by volume) initially, changed to 74:26 at "a", to 4:1 at "b", and to 97:3 at "c", at a flow rate of 2 mL/min. (Reproduced by kind permission of the author and of Analytical Chemistry, and redrawn from the original paper).

Unlike GC, it is difficult to recognise the order of elution of different components intuitively. In this instance, stepwise elution with acetonitrile-water mixtures was used, but there is evidence that some change in the order of elution of specific components is possible with different gradients of acetonitrile and water. This appears to be because acetonitrile interacts in a specific way with the π electrons of double bonds. Methanol does not interact with double bonds in the same manner, and it seems that separations of fatty acid derivatives are less affected by the nature of the gradient when this is used. There have been attempts to use ternary mixtures of methanol-acetonitrile-water or acetonitrile-tetrahydrofuran-water, but none appear to offer special advantages.

It is possible to use acetonitrile alone as the mobile phase, but with a flow gradient, and this simplifies the isolation of specific components in micropreparative HPLC, although it may reduce the selectivity of the separation. By using base-deactivated stationary phases, it is possible to separate the picolinyl ester and dimethyloxazoline derivatives of fatty acids, which are so useful for identification later by GC-MS [8]. This is discussed in greater detail in our mass spectrometry pages.

The separation illustrated was published more than thirty years ago. The column was longer and wider than the current norm, and improved stationary phases are now available. It should therefore be easy to reproduce such separations with modern columns of conventional dimensions, but I found it difficult to find a better published separation in the current literature. Why is this, when so many papers appear on the topic? There are large numbers of papers that deal with ever more esoteric derivatization reagents to change the sensitivity of detection, while ignoring the actual chromatography. I have very little idea of how even the main types of derivatives in common use affect the selectivity or general quality of separations, as there appears to be little discussion of the chromatographic process.

The final question is how can this situation be changed. In my opinion, we need more work on the theoretical basis of separations of simple fatty acid derivatives with the common range of stationary and mobile phases, and in particular to see how the selectivity of separations, especially of positional isomers, can be influenced. It would be useful to use modern chemometric methods to optimize separations with a variety of binary- or ternary-component mobile phases. Also, a better understanding of the influence of the esterifying moiety on separations would be of value. Do we need to stick to ODS phases? The properties of these can be varied according to the method of manufacture (monomeric versus polymeric) and the influence of this on separations of fatty acid derivatives should be known. Further systematic work on phases with bonded octyl groups or with longer-chain alkyl moieties would be useful. What about other hydrophobic phases such as those with bonded phenyl groups or with organic moieties bonded to polymer backbones instead of silica? This might be an excellent research topic for someone.

To be pragmatic, we should not lose sight of the fact that reversed-phase HPLC of fatty acid derivatives is already an extremely useful technique, which could be used more for micropreparative separations of fatty acids. For example, it is the best method for isolation of cyclic fatty acids from used frying oils, as discussed in our frying oil pages). Excellent separations of positional isomers of fatty acids have been reported, at least when double bonds are relatively close to the carboxyl group in the fatty acid, but this does not seem to have been pursued. Also, the technique is of value for analysis per se of fatty acids with labile functional groups, such as hydroperoxides or cyclopropene rings. On the other hand, I have no doubt at all that GC is the only technique that need be considered for the vast majority of samples, when that technique is available.