Abstract: Methyl esters are widely used for the gas chromatographic analysis of fatty acids, and little thought may be given to alternatives. Propan-2-ol and butanol esters have been shown to have advantages in specific applications, so should we be considering them for more general use? Some of the advantages and problems of using these other esters are discussed.

Methyl esters are used almost universally for gas chromatographic (GC) analysis of fatty acids [1]. There are a host of simple methods available for their preparation, and of course a vast amount of published data on their GC retention properties. They are chemically the simplest ester derivative that can be prepared, with the lowest molecular weight, so they elute from GC columns at lower temperatures than do other derivatives. In addition, their polarity is low and they can be separated by high-performance liquid or thin-layer chromatography methods as well as by GC. Most of us do not give the choice of derivative for GC a second thought, but occasionally we should stand back and think again about even the most basic elements of analysis.

What are the alternatives to methyl esters? Pentafluorobenzyl esters are frequently recommended for GC with electron-capture detectors to improve the sensitivity and specificity of detection, but they do not confer advantages in other circumstances as specialized instrumentation is necessary. In recent years, the use of specific nitrogen-containing derivatives of fatty acids, first pyrrolidides, and more recently picolinyl ester and 4,4-dimethyloxazoline (DMOX) derivatives, has greatly simplified the task of identification by GC-MS. It has been suggested that the last especially may be a general-purpose derivative for GC analysis, but I am doubtful as rather high temperatures are needed for their preparation and they are not very stable on storage.

Methyl esters can perhaps be too volatile on occasion, rendering the analysis of lipids containing short-chain fatty acids rather difficult. For example, it is common practise to use butyl esters for separation of the fatty acids of milk fat. The higher boiling point of butyl butyrate especially means that it is less likely to evaporate during the preparation step, and on GC analysis it is well resolved from the solvent peak. Good quantitative results are then obtained for the C4 to C12 components, and any correction factors (to allow for the response of the flame-ionization detector) are likely to be smaller and more reproducible than for methyl esters.

It has been pointed out that butyl esters of cis- and trans-forms of specific positional isomers of monoenoic fatty acids, such as those in butter fat, elute together on Carbowax (polyethyleneglycol) columns, so simplifying one type of analysis [2]. In some circumstances, this might be considered a disadvantage, but there are others in which it could be useful.

GC Properties of Esters of Butanol and Propan-2-ol

Is there any reason, why we should contemplate departing from the use of methyl esters for more general separations of fatty acid derivatives? There are a series of papers from the laboratory of Robert Wolff in France, which suggested that, on polar GC columns, it may be possible to get much better separations of configurational and positional isomers of fatty acids if they are in the form of the propan-2-ol esters (isopropyl). This was first demonstrated for geometrical isomers of linolenic acid separated on the polar phase CP-Sil 88™ (100% cyanopropyl polysiloxane) [3]. In this instance, all eight possible trans isomers of linolenic were separable as the propan-2-ol esters, but only six peaks were seen for the corresponding methyl esters.

While he was not able to see an improvement in the separation of cis and trans monoenes, it would be of interest to see what could be done if modern chemometric methods were applied to the problem. However, it was shown that almost base-line resolution of petroselinic and oleic acids was possible for the propan-2-ol esters, because of a small but vital increase in the difference in equivalent chain-length values from 0.06 to 0.08 of a carbon unit in comparison to methyl esters [4]. These acids are important components of certain seed oils which are valued for industrial purposes (Umbelliferae), so simplification of the analytical methodology is of some value. Thies [5] later found that similar results to those of Wolff could be obtained by preparing the butyl esters. My Bulgarian collaborator, Boryana Nikolova-Damyanova, and I obtained excellent resolution of petroselinic and oleic acids in the form of ester derivatives of a variety of short-chain alcohols (unpublished data). Isopropyl and tert-butyl esters of these fatty acids also gave better separations on silver ion chromatography [6].

To show the quality of the separation that can be obtained I illustrate a separation of butyl ester derivatives of the fatty acids of aniseed oil in Figure 1. Not only are petroselinate (6-18:1) and oleate (9-18:1) resolved close to the base line, but cis-vaccenate also (11-18:1). 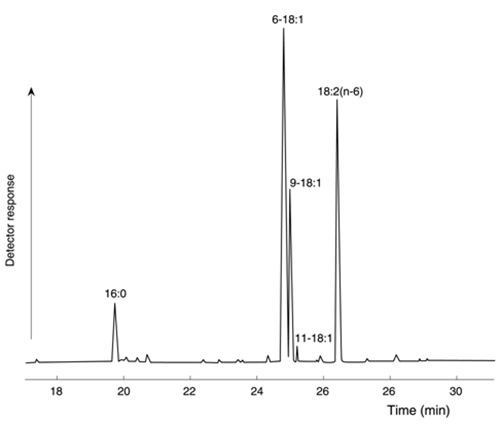 Propan-2-ol and butanol will dissolve triglycerides readily so it is not necessary to add other solvents to solubilise these lipids during derivatization. Indeed, Wolff first explored the use of propan-2-ol esters as part of a one-step procedure for extracting and simultaneously transesterifying lipids [7]. I have found this useful with plant lipid extracts, as propan-2-ol will deactivate the lipases that can otherwise be troublesome. On the other hand, the relatively high boiling points of propan-2-ol and butanol do mean that it is more troublesome to eliminate the excess of these from reaction media by evaporation than it is for methanol.

For many purposes in mass spectrometry, isopropyl esters are no better than methyl esters in that both undergo complex rearrangements under electron bombardment, and in particular it is not possible to locate double bonds in monoenes (see our web page on mass spectrometry of alkyl esters). Neither gives good molecular ions with polyunsaturated fatty acids, so determination of molecular weight is not straightforward. The mass spectrum of isopropyl docosahexaenoate (22:6(n-3)) is illustrated in Figure 2.

It is evident that the molecular ion is not very abundant and is only seen under magnification, but there is a useful ion for loss of the isopropyl moiety ([M-43]+), which allows the molecular weight to be determined at least. This is not possible from the spectrum of the corresponding methyl ester. Ions at m/z = 108 and 194 that are indicative of double bond positions in polyunsaturated fatty acids are just as clear as with methyl ester derivatives.

In summary, many ester derivatives may be better than methyl esters for resolution of positional isomers of fatty acids by GC. Propan-2-ol esters are eluted at similar temperatures to methyl esters, so should be the favoured alternative. I do not mean to suggest that everyone should now immediately change a type of derivative that has proved satisfactory for most purposes for years. Indeed, I would like to see much more published information and have more personal experience, before recommending such a change. At the moment, it seems likely that changing to propan-2-ol or butanol esters will only prove of real value to analysts in some limited circumstances. Nonetheless, it does no harm now and again to reconsider even the most basic elements of our procedures.

This article has been updated appreciably from one by the author that first appeared in Lipid Technology, 7, 64-66 (1995) (by kind permission of P.J. Barnes & Associates (The Oily Press Ltd)), who retain the copyright to the original article.