Abstract: In the right hands and for suitable samples, high-temperature gas chromatography is a valuable tool for determining molecular species of triacylglycerols. If used inappropriately, it can give meaningless results. Particular care is required to check response factors.

The flame-ionization detector has been a wonderful boon to lipid analysts. It is inexpensive, robust, and offers a linear response over the wide range of chain-lengths encountered in the gas chromatographic analysis of simple fatty acid derivatives such as methyl esters. Indeed, lipid analysts expect a degree of precision in determining fatty acid composition that is rarely achieved in other fields of biochemistry. Similarly, when the technique is applied to diacylglycerol derivatives derived from phospholipids or wax esters, excellent resolution is possible with modern polarizable phases in fused silica columns, and again the flame-ionization detector affords a high degree of precision with components that range up to nearly 700 in molecular weight [1].

It was therefore inevitable that analysts would wish to use high-temperature GC with flame-ionization detection for the separation and quantification of triacylglycerols. After all what is the alternative?

High-temperature gas chromatography ought to be competitive therefore, so what are the problems. At first sight, there is any number of excellent separations of triacylglycerols published in the scientific literature, with those from modern polarizable phases in short capillary columns of fused silica exhibiting resolution by both chain-length and degree of unsaturation. This leads to my first cautionary note. Many of these separations have had the baseline manipulated electronically to compensate for a drift upwards with time. This is not a form of cheating or simply for aesthetic purposes, but is a valuable step to simplify monitoring of separations and improve quantification. However, analysts should be aware that this might have been done when they attempt to reproduce published work.

Triacylglycerols in commercial oils and fats range in molecular weight to 900 or more, so they are not at all easy to volatilize for gas chromatography purposes. The injection procedure can be of critical importance, since any sample discrimination at this stage will render it impossible to achieve good quantification later. Certainly, a large number of papers have appeared over the years on this topic advocating various injection systems and suggesting the inappropriateness of others, but an international collaborative study with cocoa butter as the analyte suggests that there is little practical difference between the main contenders - cold on-column injection, split injection and programmed-temperature vaporizer injection [2]. Most modern gas chromatographs should come equipped with one or other of these as an option. However, cocoa butter is a relatively saturated fat, and a question mark must remain against this aspect of high-temperature GC for more highly unsaturated oils such as soybean or rapeseed oils.

Nature of the Stationary Phase

The next aspect that needs to be addressed is the nature of the liquid phase. Again great strides have been made in recent years by column manufacturers to improve the temperature stability of liquid phases by introducing chemical bonding to the support and cross-linking of polymers. Low-polarity phases are most stable to high temperatures, but only permit separation by chain-length. On the other hand, high-polarity or polarizable phases offer some remarkable separations by both chain-length and degree of unsaturation, but they are least stable to high temperatures.

In current practice, there appears to be a trend towards the use of a compromise of medium polarity phases, which afford an adequate degree of separation by degree of unsaturation for many practical purposes with acceptable temperature stability. On the other hand, it is still necessary to reach temperatures of 360°C or more to elute all the triacylglycerol species that may be of interest in oils and fats. This is close to the cracking temperature of most organic materials, and must remain a limitation to the technique.

Other practical factors that need to be considered are the nature and purity of the carrier gas, flow-rate, rate of temperature programming, and whether the carrier gas is maintained at a constant pressure or constant flow rate.

But Does it Work in Practice?

The most important question of all, however, is does the method work in practice? A series of recent papers from the laboratory of Ulberth and colleagues seems to answer “yes” to this for cocoa butter at least [2-6]. International collaborative studies show that this is the most reliable and accurate of a variety of methods that were tried. That said, anyone considering using the method should read these papers with particular care, and be aware of the need for substantial response factors. Figure 1 illustrates this. The five main components of cocoa butter, from POP to SOO, eluted between 24 and 33 minutes of the analytical run under the conditions of the analysis, and the response factors were linear over this period. The difference in relative response between the first and the last components varied by almost 50%. 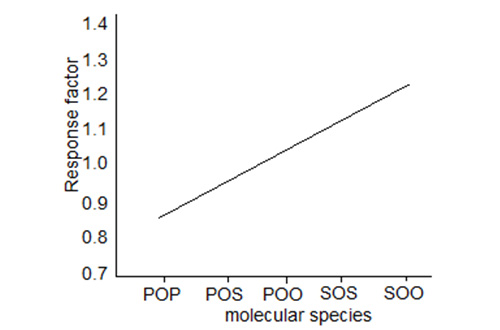 I would like to know the cause of this variation. Part will certainly be due to changes in the flow rate of the carrier gas with temperature, which can be quite appreciable at the high temperatures used in these studies. However, a significant part could due to decomposition of the analyte at the high temperatures employed in analysis. If this happens, do the fragments simply bleed off slowly with time causing a rise in the base line, or do they react chemically with the stationary phase causing a slow change in its properties? The triacylglycerols of cocoa butter are relatively simple in nature, and consist almost entirely of saturated and monoenoic fatty acids. What happens to response factors when such methods are applied to highly unsaturated vegetable oils? I have seen evidence of thermal decomposition in high-temperature GC of triacylglycerols from some laboratories in which the peaks emerge from a broad hump of decomposing material, before the base line settles down once more.

How Long do the GC Columns Last?

A final question is how long do GC columns last under such harsh chromatographic conditions? My impression from limited personal experience is that they can last for many months if used regularly in a dedicated gas chromatograph. If they are used only occasionally and are removed from the instrument between analytical sessions, their practical life is reduced appreciably.

With so many questions and caveats, the reader may be forgiven for thinking that I have doubts about the value of high-temperature GC for the analysis of triacylglycerols. In fact, I consider this can be an excellent method for the analysis of such relatively saturated fats as cocoa butter and perhaps milk fat or lauric oils, provided that the same care is taken in determining response factors with appropriate standards as has obviously been done by Ulberth and his colleagues in their published work. The accuracy may not be as great as in the determination of simple fatty acid compositions, but as I have commented earlier, few other biochemical assays can match that kind of precision. My concern is that novice analysts will use these methods for inappropriate highly unsaturated samples without being aware of the potential pitfalls.

Acknowledgement: This work has been funded in part by the Scottish Executive Environmental and Rural Affairs Department. This article first appeared in Lipid Technology (Christie, W.W. Lipid Technology, 17, 88-90 (2005), and it is reproduced here after substantial revision by kind permission of P.J. Barnes & Associates (The Oily Press Ltd), who retain the copyright to the original article.