Currently, there are a few official standard methods available for measuring crude fat/oil content in various types of feed and agricultural products (Thiex, 2009). They include an acid hydrolysis method (AOAC Method 954.02), a traditional Soxhlet extraction method with diethyl ether (AOAC Method 920.39), Soxhlet extraction with petroleum ether (AOAC Method 945.16), a modified Soxhlet procedure for meat products by submerging test samples in the boiling diethyl ether for reducing testing time, also known as Randall submersion method (AOAC Method 991.36; Randall, 1974), a procedure based on Randall submersion method but with application to feed, cereal grains and forage (AOAC Method 2003.05), and the modified Randall method with hexane as a solvent instead of diethyl either (AOAC method 2003.06).

There is also an alternative to the Soxhlet type of extraction methods. It is based on filter bag technology developed by Ankom Technology Inc. (Macedon, NY). This alternative method was approved by the American Oil Chemists’ Society as an Official Procedure, Am 5-04 (AOCS 2005). Ankom Technology manufactured two extractors, XT10 and XT15. XT10 is a semi-automatic system while XT15 is an automated system. Both can extract up to 15 samples at one time. Figure 1 shows the XT15 extractor. Samples are placed into filter bags, weighed and sealed, which prevents sample transfer error. Sealed bags are dried in an oven, cooled, and then placed in a bag holder which is put in a Teflon insert and then into an extraction vessel. Thus the filter bags serve to simplify handling and enable batch processing. Extraction takes place in the sealed vessel with a solvent at a high temperature (90-100°C), which accelerates extraction kinetics and reduces extraction times to a maximum of 60 min. At the end of the process the samples are removed from the instrument, dried, and weighed. The extractor can recycle solvent and make it ready for reuse. 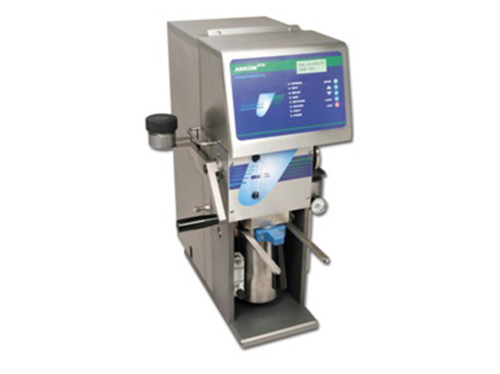 The extraction system is designed to extract crude oil/fat using conventional solvents, such as petroleum ether or hexane. The compounds extracted are primarily triacylglycerols together with a small amount of related lipids, traditionally termed “crude oil/fat.” The analysis is achieved by measuring the loss of mass due to the extraction of oil/fat from the sample encapsulated in a filter bag. The quantitative isolation of the sample is accomplished by surrounding the sample in a sealed filter bag with a filtering capacity in the 2 to 3 micron range. The filter bag has sufficient porosity to permit rapid solvent passage and is composed of polymeric material that is resistant to the higher temperatures and solvents used in the instrument. Therefore, the filter bag method is an indirect method for measuring crude oil (based on sample weight difference before and after extraction) while other methods cited above are all direct methods (measuring the amount of extracted material).

Distillers Grains and Analysis of Their Crude Oil Content

In recent years, increase in the demand for ethanol as a fuel additive and a decrease in dependency on fossil fuels have resulted in a dramatic increase in the amount of starchy grains used for ethanol production. A major process for making ethanol from corn and other grains is the dry-grind method, with distillers dried grains with solubles (DDGS) as a main co-product (Balat and Balat, 2009). As a result, like fuel ethanol, DDGS has become a global commodity (RFA, 2010).

DDGS is a dry mixture of particulate materials. It is a concentrated form of nonfermentable components from the original corn kernel, including protein, oil, fiber, and minerals (Speihs et al., 2002; Moreau et al., 2011; Liu and Han 2011). Although the product has been in the market for over a century (Staff, 2011), its surge in global supply in recent years has stimulated many new investigations into this important co-product of biofuel production. In particular, chemical composition of DDGS has been of great interest to researchers in animal science, ethanol producers, and traders in feed industry since the larger variation in chemical composition of DDGS over other animal feeds has been a major constraint for its uses. Many causes have been identified for the large compositional variation of DDGS (Belyea et al., 2004; Liu, 2011), but lack of standardized testing procedures for accurately determining nutrient contents of DDGS is also a factor (Thiex, 2009).

Oil is the third most abundant component of DDGS (about 12%), following non-starch carbohydrate (about 52%) and protein (about 28%) (Liu, 2011). Accurate measurement of the oil content in DDGS is critical because it is not only a major nutrient but also a condensed energy source. In theory, any of the above methods may be suitable for measuring crude oil content in DDGS. However, there is apparent difference among them in terms of accuracy and reliability. For example, in an attempt to standardize the analytical methods for DDGS, Thiex (2009) compared several methods for each key nutrient in DDGS. With regard to crude oil analysis, the study showed that the three AOAC methods (945.16, 2003.05, and 2003.06) were statistically equivalent for measuring the crude oil content of DDGS, although in the interlaboratory portion of the study, AOAC 945.16 (petroleum ether method) had a significantly lower coefficient of variation than the other two nonhydrolysis methods.

Recently, a study was conducted at the author’s lab to compare several factors affecting crude oil analysis of DDGS by the AOCS Official Method, Am 5-04, as compared with milled corn, the feedstock for the dry-grind process for ethanol production after grinding corn (Liu, 2010). The factors under investigation included: (1) sample type (milled corn, DDGS), (2) sample origin (ethanol plant 1, 2, 3), (3) sample particle size (original matrix, <0.71 mm, <0.50 mm mesh opening), (4) solvent type (petroleum ether, hexane), (5) extraction time (30, 60 min), and (6) postextraction drying time (30, 60 min). The experiment was designed according to a complete factorial model. Results showed that for milled corn, only sample origin and extraction time had significant effects (p < 0.05) on crude oil values measured, but for DDGS, besides the two factors, sample particle size, solvent type, and drying time also had significant effects. Among them, the particle size of DDGS had the greatest effect. On average, the measured oil content in DDGS ranged from 11.11% (original matrix), to 12.12% (<0.71 mm) and to 12.55% (<0.50 mm). Regardless of the underlying factors, the method was very reproducible (standard errors < 0.05).

Therefore, based on the findings of the study, the AOCS official method Am 5-04 has to be modified in order to have accurate measurement of oil content in DDGS samples. The possible explanation for modification is that DDGS has undergone some harsh treatments (enzymatic, pH change and heat) during dry-grind processing of grain into fuel ethanol and thus its physical matrix is expected to be different from corn and some other agricultural materials. Accordingly, areas of modification recommended for using AOCS Method Am 5-04 to measure oil content in DDGS, based on the study, are summarized below: