1H-NMR is useful for a variety of quantitative analytical purposes in the chemistry of fats and oils that are briefly discussed here.

Fatty Acid Profile. The fatty acid profile of fats and oils as well as their derivatives such as alkyl esters is the major factor influencing their chemical and physical properties and subsequently their various applications. While GC is usually the method of choice for determining the fatty acid profile, the common unsaturated fatty acids (oleic, linoleic, linolenic) in an oil or fat can be quantified using 1H-NMR. This method utilizes the area per proton (determined by integration) and gives equations for determining the amounts of the unsaturated fatty acids. The results agree well with GC conducted as a control, although reportedly 13C-NMR results correlate even better with GC (Miyake et al., 1998). As an example, the 1H-NMR spectrum of soybean oil is given in Figure 1. 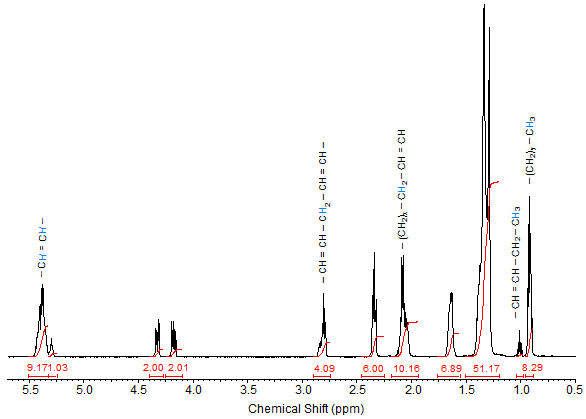 in which 'A' indicates the amounts of the subscripted fatty acids and 'I' indicates the experimentally determined integration values of the terminal methyl, bis-allylic and allylic protons, the fatty acid composition of soybean oil can be determined. The result is 18:1 = 25.40%, 18:2 = 50.36%, 18:3 = 8.90% with the rest (15.33%) being accounted for by saturates is obtained. These values agree well with the known average fatty acid composition of soybean oil. Related work is Miyake et al. (1998a).

Identification verification of vegetable oils. While different oils or fats may be deliberately mixed for specific reasons, the adulteration of high-value oils with oils of lesser value constitutes a problem of economic and commercial significance when the adulterated oil is marketed as the pure, high-value oil. This is a major problem for olive oil, which is an expensive oil of recognized nutritional value. Accordingly, numerous research papers from major olive oil-producing Mediterranean countries, such as Greece, Italy and Spain, deal with identifying lower-value oils, such as hazelnut oil, used for adulterating olive oil. The adulteration problem is complicated by the fact that the lower-value oils usually have fatty acid profiles similar to olive oil. Among the methods used for analyzing potentially adulterated olive oil is 1H-NMR (besides 13C-NMR). For example, NMR was utilized in a study applying multivariate statistical methods to certain peaks of olive oil diluted with hazelnut or sunflower oil (Fauhl et al., 2000). Besides analyzing olive oil for diluents, 1H-NMR, together with analytical data, can be used in assessing the variety and geographical origin of the oil (Sacco et al., 2000). Even when not quantifying any components, the peak differences in NMR can be used to distinguish vegetable oils by visual inspection of the spectra (Guillén and Ruiz, 2003). Overviews of methods for assessing the quality and adulteration status of olive oil are available (Sacchi et al., 1997, Mannina and Segre, 2002).

Monitoring of oxidation. The oxidation of vegetable oils or their derivatives is an important quality problem and can lead to further deterioration of the oil. Especially the more unsaturated fatty acids with bis-allylic methylene groups are susceptible to oxidation. In studies of oxidation by 1H-NMR, primary oxidation products such as hydroperoxides and secondary oxidation products such as aldehydes were detected (Guillén and Ruiz, 2001, Guillén and Ruiz, 2005). Oxidation of ethyl docosahexaenoate was also determined by 1H-NMR and correlated with traditional methods (Falch et al., 2004). 1H-NMR is especially useful for such studies since for this method the samples do not require any further treatment which could cause changes to the samples themselves.

Solid fat content (SFC). While the other methods discussed here usually rely on high-resolution, research-grade NMR instruments, a bench-top, low-resolution pulsed NMR instrument can be used for determining the SFC of an oil or fat. The method determines the amount of solid triacylglycerols in the oil or fat at different temperatures, with only the pulsed NMR signal of the liquid fat being measured (van Duynhoven et al., 1999). The low-temperature signal is proportional to the total liquid at 60°C. The method is used for quality control purposes in hydrogenation, blending and interesterification. The SFC is used to assess properties of food products such as hardness and mouth feel. Crystallization mechanisms of fat blends can be studied by kinetic SFC measurements. The NMR-based SFC method is considered to be more accurate than the older dilatometric method giving the solid fat index (SFI) as shown by an interlaboratory collaborative study. The results of SFC cannot be directly compared to the dilatometric SFI. The dilatometric procedure is also more labor-intensive and cumbersome than SFC determination by NMR.

Non-fatty (extraneous) materials. Two examples for the analysis of non-fatty or extraneous materials in fatty compounds by 1H-NMR illustrate this application. The first example is the quantification of other lipidic materials, such as sterols, in vegetable oils (Sacco et al., 2000). The signal of a methyl group at C-18 of sterols is reportedly especially useful for this purpose. The second example is the blends of biodiesel with conventional petroleum-derived diesel fuel. 1H-NMR may be applied to verifying the blend level of biodiesel with the petroleum-derived fuel (Knothe, 2001b), in which case again the strong peak of the methyl ester moiety is useful.