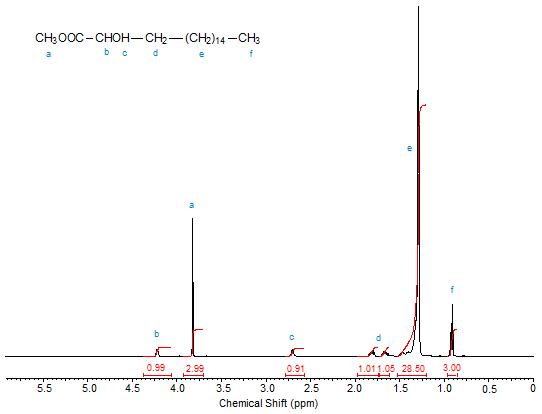 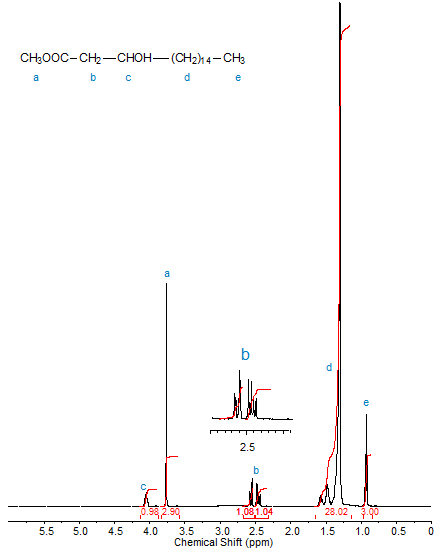 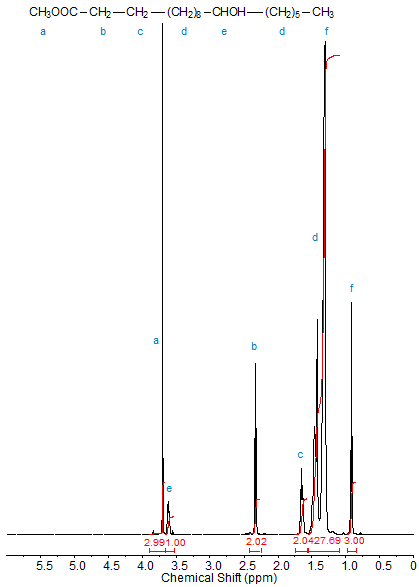 Information on the NMR spectra of saturated hydroxy fatty compounds can be found in other publications. In (S)-(+)-methyl-3-hydroxyhexadecanoate, the proton of the hydroxy-bearing carbon at C-3 generated a multiplet at 3.98 ppm while the signal of the protons at the C-2 carbon was split into two doublets of doublets resonating at 2.39 and 2.50 ppm (Jakob et al., 1996).

Shift differences of the methine protons in vicinal hydroxy (1,2-diols) fatty acids allow distinguishing of the erythro and threo diastereomers (Ewing and Hopkins, 1967).

The prime example of an unsaturated hydroxy fatty acid is probably ricinoleic (12-hydroxy-octadeca-9-enoic) acid, the major fatty acid in castor oil, which contains a hydroxy group in the homoallylic position (3(Z)-enol). The C20 analogue of ricinoleic acid is lesqueroleic acid obtained from lesquerella oil. The proton NMR spectrum of the methyl ester of ricinoleic acid is shown in Figure 4. Due to the proximity of the hydroxy group to the double bond, the signal of the olefinic protons is split, with the downfield signal assigned to the proton at C9 and the upfield signal to the proton at C-10 (Lie Ken Jie and Cheng, 1993). The signal (quintet) of the proton at C12 is observed slightly upfield at about 3.65 ppm of the methyl ester signal, even slightly overlapping it. Again the protons at C2 are found at about 2.3 ppm. The presence of the hydroxy group causes the signals of the allylic protons to split compared to methyl oleate. The signals of the protons at C11 and C8 are observed at 2.20 and 2.05 ppm, respectively. The signals of the other protons are contained in the broad methylene signal, with the peaks of the protons at C3 and C13 being at the downfield end. 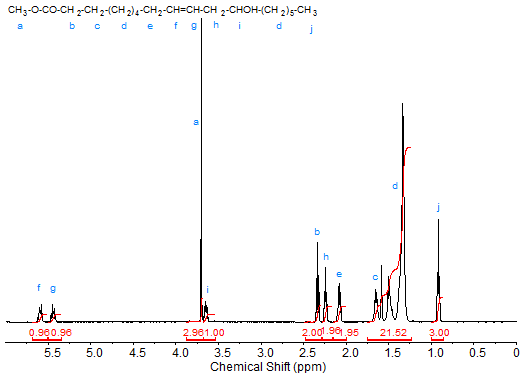 7,10-Dihydroxy-8(E)-octadecenoic acid (DHOE) is an unusual product obtained by hydroxylation of oleic acid with certain Pseudomonas species (Parra et al., 1990, Hou et al., 1991). The erythro / threo diastereomers of corresponding synthetic allylic dihydroxy compounds (2(E)-ene-1,4-diols) can be distinguished by 1H-NMR in that the peak of the olefinic protons (5.60-5.68 ppm in deuteromethanol (CD3OD)) in the erythro diastereomers is slightly downfield (0.02-0.05 ppm) from that of the threo diastereomer (Knothe et al., 1994). In methyl 8,11-dihydroxy-9-octadecynoate, the shift of the protons attached to the hydroxy-bearing carbons was observed as triplet at 4.39 ppm.