Fatty acids containing a carbocyclic unit are most commonly cyclopropene or cyclopentene compounds (see our web page on natural cyclic fatty acids). Eicosanoids such as the prostaglandins are also cyclopentane derivatives but these are not included here, and acids with heterocyclic units are discussed elsewhere (see epoxy acids).

The best known cyclopropene acids are malvalic and sterculic which are present in high levels in sterculia oils and at lower levels in kapok seed oil (around 12%) and in cottonseed oil (about 1%). The highly reactive cyclopropene acids are destroyed during refining and hydrogenation of the oils. They have attracted interest because they inhibit the biological desaturation of stearic to oleic acid. 2-Hydroxysterculic acid, which has also been identified, is probably an intermediate in the bioconversion of sterculic to malvalic acid by α-oxidation.

NMR data for the cyclopropene acids are presented in two Tables. Table 1 contains data for sterculic and malvalic acids and for natural and synthetic compound closely related to these. The compounds in the Table 2 are synthetic compounds with 14-16 or 24-26 carbon atoms. The cyclopropene unit itself has a methylene signal (7.0-7.5 ppm) and two olefinic signals. The latter differ by a value that is high when the cyclopropene unit is close to the carboxyl group and diminishes as it moves away. Figures in the two Tables show differences of 3.6 (Δ4), 2.5 (Δ5), 0.5 (Δ8), and 0.3 (Δ9). The cyclopropene unit also has a marked influence on the chemical shifts of nearby carbon atoms. Pollardhas given shielding parameters for the cyclopropene ring of -3.73 (α), -2.38 (β), -0.5 (γ), and -0.3 (Δ). These are larger than the corresponding parameters for the olefinic group.

Cyclopentene acids are present in the seed oils of the Flacourticeae. They range from C6 to C24 compounds with the structure shown. Some members have a second double bond in the side chain. The most common are hydnocarpic acid (16:1), chaulmoogric (18:1), and gorlic (18:2). 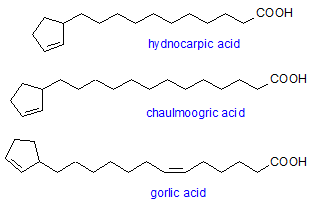 The NMR spectra of the cyclopentene acids lack the ω-1 to ω-3 signals characteristic of most fatty acids and instead show signals with unusual chemical shifts associated with the cyclopentene ring. Also present are signals at around 28, 29, and 36 ppm from the carbon atoms designated α, β, and γ in the above structure (Table 3).