The introduction of one double bond gives rise to several peaks in the NMR spectrum compared to the saturated chains in methyl stearate or stearic acid.

In methyl oleate (methyl 9(Z)-octadecenoate; Fig. 1), the following changes can be observed in comparison to methyl stearate and stearic acid: Two olefinic protons (integration value = 2) at about 5.3 ppm, four allylic protons (at C8 and C11) at about 2.05 ppm. The theoretical integration value of the strong CH2 peak decreases to 20. 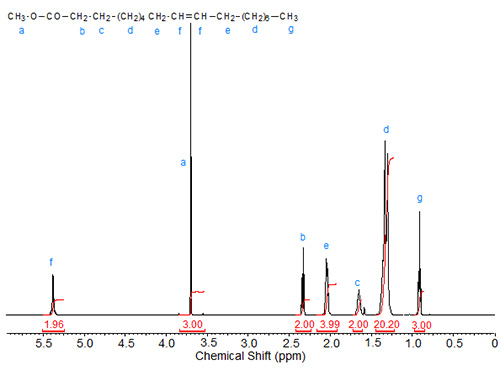 Introduction of a second double bond to give linoleic acid or methyl linoleate (methyl 9(Z),12(Z)-octadecadienoate; Fig. 2) gives rise to a peak at 2.8 ppm caused by the bis-allylic protons located at C11. The theoretical integration value of the olefinic protons increases to four while that of the large CH2 peak decreases further to 14. 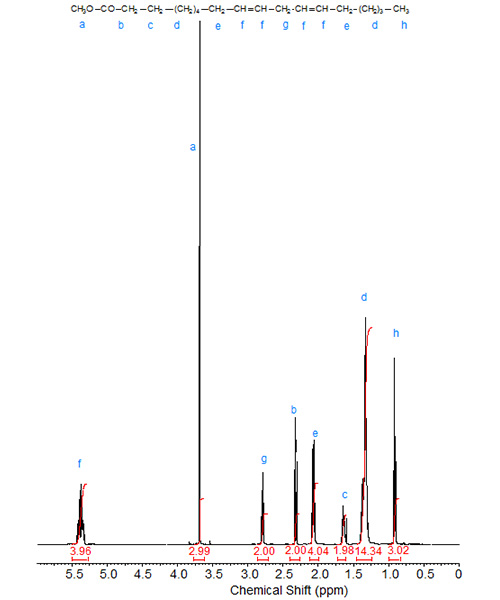 A third double bond in linolenic acid or methyl linoleate (methyl 9(Z),12(Z)-octadecatrienoate; Fig. 3) does not cause any new peaks compared to linoleic acid or methyl linoleate, only changes in the integration values. However, the triplet of the terminal methyl group (ω1) shifts downfield slightly, to about 0.95 ppm. This shift can be used for quantification purposes in mixtures as the terminal methyl triplet can be integrated separately from the corresponding signals of the other fatty acids. 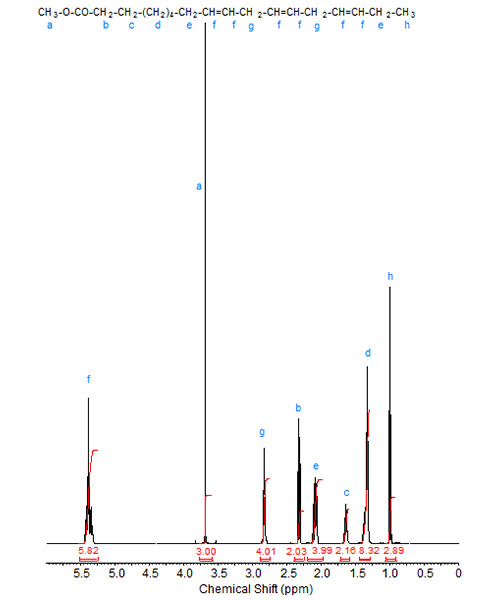 "Migration" of the double bond leads to shift of signals, especially when the double bond approaches one of end of the chain. This effect was discovered in early NMR studies of a full series of cis-octadecenoic and some acetylenic fatty acids (Gunstone and Ismail, 1967). Prior work demonstrated this effect for double bonds near the terminal methyl group (Glass and Dutton, 1964; Storey 1960). The shifts of the olefinic protons do not differ significantly, if at all, for positions toward the middle of the chain (C8-C12 for a C18 chain). For determining such positions in a chain, a shift reagent [Eu(fod)3d30] was used (Frost and Sies, 1974; Bus and Frost, 1976). Similar work was carried out for unsaturated triacylglycerols using [Pr(fod)3] (Frost and Gunstone, 1975).

The 1H-NMR spectrum of the C18 fatty acid methyl ester methyl petroselinate (Fig. 4), in which the cis double bond is located at C6, however, shows minor changes in the chemical shifts compared to methyl oleate, such as the fine structure of the signals of the olefinic protons and a slight downfield shift of the triplet caused by the C2 protons. 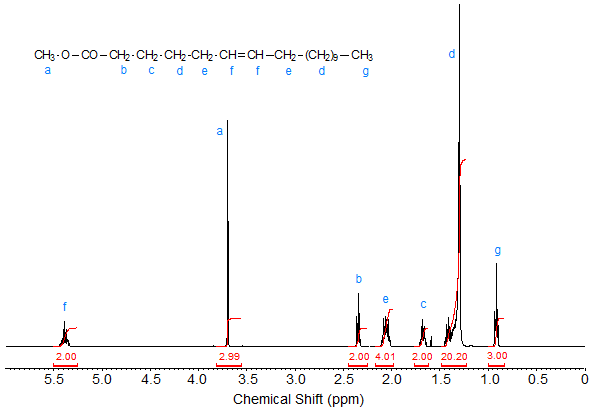 Double bond configuration affects the NMR signals of the unsaturated fatty compounds. The compounds whose spectra are depicted in Figures 1 to 4 all possess cis double bonds. Figure 5 shows the NMR spectrum of methyl elaidate, the Δ9 E-isomer of methyl oleate. Figure 6 is an enlargement of the signals of the olefinic protons of methyl oleate and methyl elaidate. The smaller coupling constants for cis (6-15 Hz) than for trans (11-18 Hz) are visible in the spacing of the peaks. Table 1 gives some characteristic shifts of unsaturated fatty compounds. 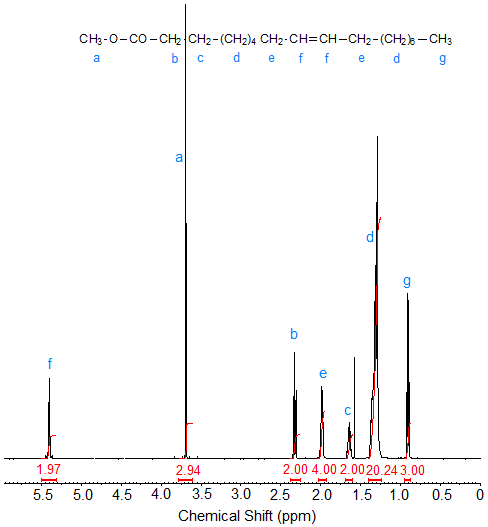 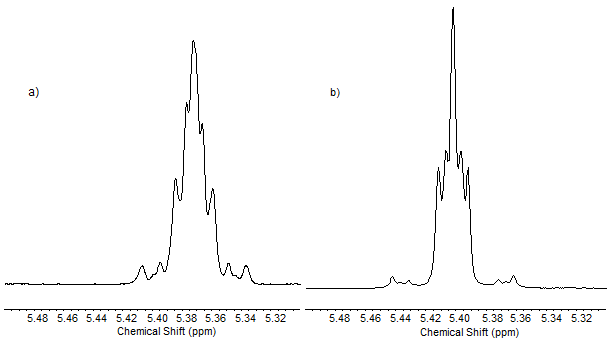 Figure 6. Expansion of the signals of the olefinic protons in the 1H-NMR spectra of (a) methyl oleate and (b) methyl elaidate.

The differences in the coupling constants between cis and trans can be visualized by expanding the peaks of the olefinic protons:

The cis and trans isomers can be distinguished by the coupling constants as well as by some chemical shifts. For example, the signals of the allylic protons in elaidic acid are shifted slightly upfield (by about 0.05 ppm) compared to oleic acid. On the other hand, the signals of the olefinic protons of elaidic acid are slightly downfield (by about 0.03 ppm) compared to oleic acid. Thus, the shift difference between the peaks of the allylic and the olefinic protons is suitable for distinguishing cis/trans isomers, with the difference being greater for trans. This effect has been discussed in the literature (Frost and Gunstone, 1975), where also the δ-values for each methylene group were calculated.

Gunstone and Jacobsberg (1972) gave the chemical shifts of all isomers of 9,12-diunsaturated C18 acids. See Table 4 for the values of those containing only double bonds.