Figures 1 to 3 show the 1H-NMR spectra of several branched acids or esters. In methyl 10-methylhexadecanoate, the methyl group at C10 exhibits, as expected, a doublet, which is slightly upfield from the triplet of the terminal methyl group at C16 (Fig. 1). Accordingly, in isostearic acid (16-methyl heptadecanoic acid; Fig. 2), the two equivalent terminal methyl groups exhibit one doublet of integration value 6 at 0.9 ppm. The signal of the methine proton at C16 is observed at 1.55 ppm. 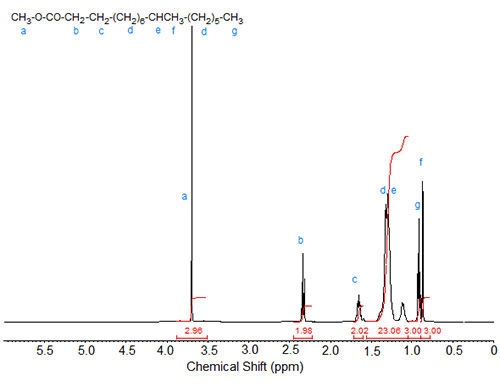 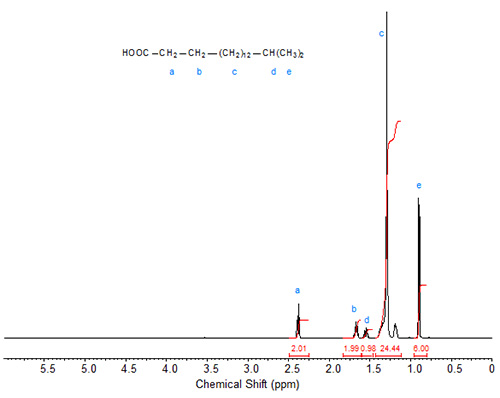 In phytanic acid (3,7,11,15-tetramethylhexadecanoic acid; Fig. 3), the methyl group at C3 can be correlated with the doublet at 1.01 ppm while the other four methyl groups (the terminal methyl groups being equivalent) cause the two overlapping doublets of integration value 12 at 0.85-0.90 ppm. The complex C-H signal area with a theoretical integration value of 20 is caused by the nine methylene groups in the three CH2 clusters and the two methine protons at C7 and C11. The signal of the C15 methine proton is observed at 1.57 ppm (similar to the methine proton in isostearic acid) while the C3 methine proton causes the multiplet at 2.00 ppm. The diastereotopic protons at C2 show a split signal at 2.4 and 2.18 for one proton each. 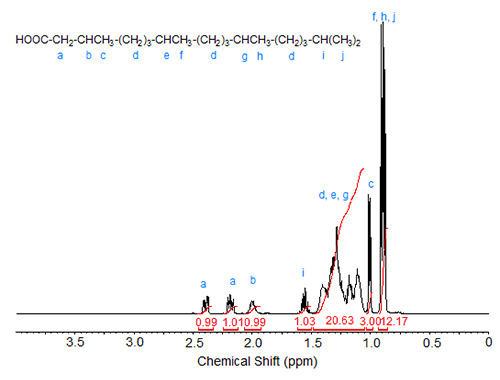 Similar data for branched fatty compounds can be obtained from the literature, for example, synthetic compounds (Biermann and Metzger, 2004) or unusual fatty acids found in the mollusc Siphonaria denticulata (Carballeira et al., 2001).

Figure 4 depicts the 1H-NMR spectrum (in CDCl3) of methyl dihydrosterculate, which contains a cyclopropane ring. The signal of the cis methylene proton of the ring is shifted remotely downfield to below 0 ppm while that of the trans proton is located close to that of the methane protons in the ring. The signals of the protons attached to the carbons adjacent to the ring are also split at 1.175 and 1.40 ppm (Knothe, 2006). 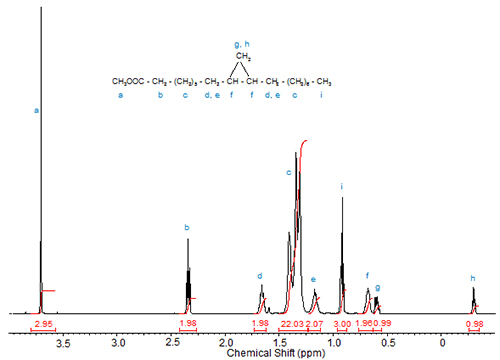