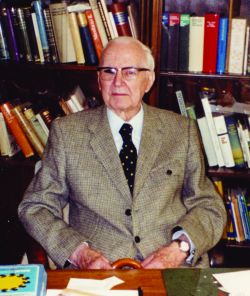 In the summer of 2009, Dr. Hermann Pardun of Germany passed away at the age of 101. During his professional life he published over 60 papers about fats, oils, and lecithins, all in German. He filed many patents on lecithin inventions, resulting in granted patents for his employer (Unilever). But who was Pardun, what were his research and development capacities, and how have his inventions changed the lecithin world?

Hermann Heinrich Theodor Pardun was born April 14, 1908, in the city of Münster, in the state of Westfalia, at a time when Germany could still be considered an empire. He grew up in Münster and attended primary school there during World War I, and then the Gymnasium. From 1926 to 1930 he studied chemistry, with sub-majors in physics, mathematics, geology, and biology (botany), at the University of Münster. During this time, one of his chemical experiments went awry and ended with an explosion that cost him one of his eyes.

Due to the economic crisis of the 1930s, it was difficult for Pardun to find a job. In 1931, Dr. Hans Paul Kaufmann, full professor for pharmacy and chemical technology at the University of Münster, offered Pardun the position of scientific assistant. He was awarded his Ph.D. magna cum laude in 1932 for his dissertation “Activation of heavy metal sulphides by additives.” In Kaufmann’s institute, Pardun started to work on projects involving the chemistry of fats; his interest in the topic would determine much of his career and life. (During this same time, Kaufmann became internationally famous as a fats chemist, and also founded the DGF [the German Society of Fat Science], initiated the German Federal Institute of Fat Research in Münster, and the ISF [International Society of Fat Research].)

In 1936, Pardun became manager of the development laboratory for the firm Noblee & Thörl (now part of Archer Daniels Midland Co.) in Hamburg-Harburg. He worked on synthetic fatty acid production, improving oxidation by the Fischer-Tropsch-Gatsch reaction. The inventions were filed in about 20 patent applications. During World War II, he worked on reducing the amount of solvent used in oilseed extraction. At that time, plant-scale extraction was carried out batch- wise, and specifications on residual solvent in meal did not exist.

In 1948, Pardun joined the Unilever Central laboratory in Hamburg. In 1954, Unilever offered him the position of chief chemist of the Quality Assurance and Development laboratory at the site of the Unilever-Van den Bergh’s Margarine (Margarine Union) Plant in Cleve, Germany. Cleve is a small town in the lower Rhine area close to both the Dutch border and other former Unilever plants at Emmerich and Spyck. At that time, the development laboratory worked on local projects for the margarine plant, but also it would take on chemical-technical development projects for other Unilever oils and fats factories. Pardun’s solvent extraction expertise was applied in small (from today’s perspective) oil milling operations spread over Europe.

A first project was the process of upgrading rapeseed lecithin for use as an emulsifying and antispattering agent in margarine, which was needed because of a lack of soy lecithin after World War II. (The performance of soy lecithins as a replacer of egg yolk in margarine had already been proven [1].) The result was the de-oiling of crude rapeseed lecithin (containing high levels of erucic acid) in a continuous process with a mixture of 2:1 hexane/acetone [2]. A full-scale plant was never built, though, because soy lecithin became available again. Within the framework of the Marshall Plan (also known as the European Recovery Program), North American lecithin manufacturers were happy to export lecithin to Europe after World War II. European lecithin-importing manufacturer Lucas Meyer received larger than requested quantities of light-colored US lecithin, which the company then strongly super-heated into a dark-colored lecithin, acceptable for European food processors. Those processors had always used dark lecithin before and during the war.

Around 1960 the crystallization of margarine during batch production according to the Churning-Drum Process was replaced by the continuous Votator® crystallization process. The anti-spattering function of standard soy lecithin became insufficient. Colleagues in the Unilever Research Laboratory, Vlaardingen, Netherlands (Henk J. Duin, among others) and Unilever Research in Hamburg patented an invention — an alcohol-soluble phosphatidylcholine (PC)-enriched fraction with a PC/phosphatidylethanolamine (PC/PE) ratio of 4:1 — that gave excellent frying properties without spattering in low-salt containing margarines [3]. As a result of the removal of most of the divalent calcium-containing PE and phosphatidic acid the calcium insensitivity was improved; thus, calcium ions from the milk could not inactivate the phospholipid function.

Pardun’s development group established optimal process conditions [4], after which a unit for the production of PC-enriched lecithin fractions was built in the Unilever oil mill Ölwerke Spyck near Cleve (process details are contained in a publication by Liebing [5]). Another fractionation plant was installed in the 1960s at the VOZ-Unimills oil mill in Zwijndrecht, near Rotterdam, Netherlands, which unit was shut down in 1971. At the sale of the Spyck oil mill to ADM in 1986, the Spyck lecithin fractionation unit was transferred to the site of this Zwijndrecht oil mill. Recently, Unimills (now part of the Malaysian Sime Darby Group) again took over the management of this robust plant from Loders Croklaan. The lecithin fractions and other specialties produced here are marketed for use in margarines, other foods, and pharmaceutical products.

Later, Pardun and other Unilever scientists found that enzymatic hydrolysis of soy lecithin with phospholipase A2 (PLA2) yields a product with similar anti-spattering properties [6], which allowed for the plant-scale production of a range of products with tailor-made degrees of partial hydrolysis in continuously running reactors at VDO Mannheim (Germany) and VOZ-Unimills (Zwijndrecht) oil mills. The enzyme source was milled pancreas powder, purchased under the trade name Pankreatin. Since PLA2 remains active at 60-70ºC, the powder is stirred into hot water at low pH, inactivating the amylase, protease, and lipase enzymes, which are not needed. In the 1980s purified PLA2 Lecitase enzyme, extracted from pancreas, became available. Currently enzyme companies supply PLA2 and PLA1 enzymes that are produced by microorganisms.

The lecithin expertise of Pardun and colleagues in four Unilever Research Centers was also key in the extension of the Unilever lecithin business outside the margarine sector; lecithin sales to third parties became important. New fields of application were discovered. For example, hydrolyzed lecithin became an important emulsifier in the production of milk replacers for calf and piglet feeding.

Unilever’s former ownership of palm oil plantations, palm oil processing plants, and vegetable seed oil mills was based on the company’s strategy of owning oil supply chains for the margarine and detergents business. In the course of the 1960s, soybeans became an important oil source, which induced Unilever management to concentrate all local operating European oilseed crushing plants in the Unilever Oil Milling Division (Unimills; Hamburg, Germany) in 1971.

Soybean crushing required another, more internationally focused commodity market approach, in which the value of the soybean meal (constituting 82% of the total weight of soybeans) contributes significantly to the crushing margin. New crushing plants were installed, and by the early 1980s Unilever was the leader in European oil milling activities, as well as the largest European lecithin producer. After 1985, Unilever divested its seed oil milling activities and refineries and, more recently, their palm oil plantations.

Nevertheless, Pardun’s function in the Cleve margarine factory required that most of his time was spent on oils and fats (O&F) quality assurance, bacteriological control, and O&F developments. He worked on the fractionation of palm oil, which became a leading source of oil for the European margarine industry in the 1950s. And the high-melting fractions could be used as a cocoa butter replacer in chocolate production. That knowledge was used by the Unilever company Ölwerke Germania in Emmerich.

Unilever also spent much time on the development of methods for determination of shelf life and quality of refined O&F. Pardun and Edith Kroll developed a variation on the SWIFT Test (a well-accepted test procedure for determining oxidation stability of frying oils). Pardun promoted the measurement of the Extinction Value E 232 and E 268 as parameters of oil quality during neutralization, bleaching, and deodorization in the refining process. Hydrogen peroxide formation increases the E 232 value, and the formation of trienoic acid increases the E 268 extinction value.

In 1969 he published an extensive chapter on “Analysis of fats and fat products” in Schormüller’s Handbuch der Lebensmittelchemie (Handbook of Food Chemistry). This was followed in 1976 by the monograph “Analyse der Nahrungsfette” (“Analysis of Nutritional Fats”). He was involved in university courses for students in food chemistry and technology. And, of course, he also worked on acid-degumming processes, for which he tried to find an optimum between good oil quality and lecithin quality and performance.

Together with Kaufmann, Pardun was the initiator of the German Society for Fat Science (Deutsche Gesellschaft für Fettwissenschaft; DGF) in 1936. He was an active member, with presentations at many conferences. From 1973 to 1975, he was chairperson of the Analysis and Standard Methods division, which was a good platform for discussing analytical parameters and tests for determining heat damage in frying oils. Many of the DGF official methods were influenced by his investigations.

For almost two decades he was a member of ISO (International Organization for Standardization) and its Analytical Committee, whose analytic methods were binding for his company worldwide.

The DGF honored Pardun with its prestigious Normann Medal Award in 1982. His keynote paper was on 50 years of the technology of vegetable oils and fats, where he presented his experience since starting work with Kaufmann. Topics that he covered included the extraction of oilseeds, degumming of crude oils, and modification of lecithins and quality aspects of refined oils [7]. He was made an honorary member of DGF.

On the occasion of his 100th birthday in 2008, the DGF announced the annual Hermann Pardun Prize for the best scientific paper on oils and fats by a young academic scientist.

Pardun retired in 1973. He received the Bundesverdienstkreuz I. Klasse (the Order of Merit first class) from the Federal Republic of Germany for his vocational and scientific achievements. Hence, his retirement was a challenge for him to spend even more time on editing scientific papers on O&F, developing lecithin ideas, and being active in the DGF. He advised Unilever lecithin factories, where his patents were used. For a number of years he was a valuable consultant to the Lucas Meyer lecithin firm in Hamburg.

In addition to various presentations at conferences and publications, he edited papers on O&F and lecithin. Pardun’s invaluable, important book in the German language Die Pflanzenlecithine (The Vegetable Lecithins) was published in 1988 [8]. He had reached the age of 80 years. The book summarizes many of his former internal Unilever reports and patents. As an exacting chemist, he and his staff recorded extensively all experiments in laboratory journals, of which the most important data were selected for publication. Although his research activities ended around 1970, he continued to search the literature for relevant materials to include in his scientific papers till 1988. I still use this book as a basis for inspiration and setup of experiments. It is remarkable how exactly phospholipid compositions measured by qualitative thin-layer chromatography in the 1960–1970s agree with today’s experimental data, measured with quantitative high-performance liquid chromatography or 31P nuclear magnetic resonance spectroscopy. The book also describes a number of creative empirical emulsification tests, demonstrating the differences in emulsifying power of modified lecithins. Pardun published his last lecithin review paper in 1989 [9]. All his papers were published in German, which might be why some of his ideas have not been disseminated as widely as they should have been by now. However, Unilever filed all his lecithin patent applications in the English language.

Pardun kept his interest in O&F and lecithin developments all of his life. He joked that writing about lecithin kept one in good health. In reasonably good health, he and his wife lived in their home in Cleve until 2005, when his wife passed away. After that, he moved to a retirement home. He celebrated his 101st birthday with a fresh mind. Hermann Pardun passed away August 5, 2009, at the age of 101 years. A giant in lecithin and oil research has left us.