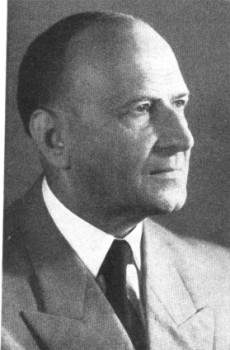 Hans Paul Kaufmann, a renowned and prolific lipid chemist and founder of the International Society for Fat Research (ISF), was born October 20, 1889 in Frankfurt (Main), Germany. After graduating from high school, he studied chemistry in Jena, Heidelberg and Berlin. He obtained his Ph.D. in January 1912 in Jena with the well-known heterocyclic and pharmaceutical chemist Ludwig Knorr (1859-1921) as Doktorvater.

From 1911 to 1914 Kaufmann worked as research assistant at the University of Jena. With the outbreak of World War I in 1914, he served in the German army. The war caused a delay in his plans to obtain a Habilitation (a qualification beyond the doctorate usually necessary in Germany and some other countries in order to become a university professor). He was finally able to obtain the Habilitation in May 1916 while on leave from military duty. Shortly thereafter, he was seriously wounded at Verdun. After recuperating from the wound, he was assigned to war-related scientific work. Beginning in 1919, he was a.o. (adjunct) Professor and Director of the Analytical Division of the Chemistry Institute at the University of Jena. The relatively early death of Ludwig Knorr caused him to move to the Pharmaceutical Institute at the University of Jena and to complete studies in pharmacy. He taught at this institute beginning in 1922. In 1931, Kaufmann became full Professor of Pharmacy at the University of Münster. He remained there until 1943 when he moved to Berlin as full Professor of Pharmaceutical Chemistry, but returned to Münster as full Professor of Pharmacy and Chemical Technology in 1946. He became Professor Emeritus in 1958, although acting as director of the Pharmacy and Food Chemistry Institute until April 1959.

Although Kaufmann’s scientific contributions in the field of fats and oils are probably his best known, he did not publish in this area until 1925 according to his publication list. The thesis of his Habilitation was concerned with the cyclization of acetylene. Until 1925, most of his publications dealt with pharmaceutical chemistry and a variety of other subjects, including heterocycles and keto-enol tautomerism. He was even involved in the founding of a company, the Chemische Werke Rudolstadt, which gave him experience in industrial technology and from which he departed in 1925.

His first contact with a lipid chemist, F. Krafft, dates to about 1911 during studies in Heidelberg. In Berlin, he studied with the famous Emil Fischer, the 1902 Nobel Laureate in chemistry and who was also Knorr’s Doktorvater. Fischer was planning systematic studies in the field of fats and oils at the time of his death in 1919 and had already worked on a method for the synthesis of glycerides. Even when after 1925 most of his scientific efforts were related to fats and oils, Kaufmann continued to contribute to other subjects. He continued his scientific contributions well into retirement, attaining a career total of more than 500 publications, of which most not only dealt with the chemistry of fats and oils but also contained the term “Studien auf dem Fettgebiet, x. Mitteilung” (Studies on Fats, Communication x) in the title. Many of these publications deal with various methods of fat analysis including chromatography and various indices such as thiocyanogen number, diene number, and others which were used for systematic analysis. Other subjects such as reactions of fats, physical properties, oxidation, polymerization as well as applied research also found Kaufmann’s interest.

Kaufmann distinguished himself not only through his numerous scientific contributions but also through his prolific and relentless organizing and administrative activities, including those on behalf of professional organizations, which are too numerous to discuss in detail in a brief article such as the present one. The founding of the German Society for Fat Science (Deutsche Gesellschaft für Fettforschung; DGF) in October 1936 was a major contribution. The DGF could be seen as a successor organization to another organization known by its German acronym as the Wizöff (Wissenschaftliche Zentralstelle für Öl- und Fettforschung; Scientific Center for Oil and Fat Research) founded in 1920 and disbanded in 1935. Kaufmann was apparently able to maintain the independence of the DGF throughout the years of the national-socialist regime despite political pressure to the contrary until all such organizations were disbanded by the Allies at the end of World War II. The DGF reconstituted in 1948 as the Deutsche Gesellschaft für Fettwissenschaft (German Society for Fat Science). Kaufmann served as the president of the DGF for 32 years from its inception in 1936 to 1968.

These organizations, the Wizöff and the DGF, facilitated international cooperation of the German lipid research community in another organization founded in 1931 known as the ICECG (Commission Internationale de l’Étude des Corps Gras; International Commission for the Study of Fats and Oils) in which besides Germany researchers from numerous other European countries including Austria, Czechoslovakia, Italy, the Netherlands and Switzerland were represented. Kaufmann was elected its president in 1937. The international contacts ceased as a result of the war. However, in 1954 Kaufmann initiated the founding of International Society for Fat Research (ISF) to further international contacts between individual members and related aspects. It was approved that year at the DGF Congress in Hannover in which representatives from numerous other countries participated. The ISF still exists, however, since 1992 it is a federation of fats and oils associations from around the world managed at AOCS headquarters in Champaign, IL.

Kaufmann also initiated a “Verband der Direktoren pharmazeutischer Hochschulinstitute” (Association of the Directors of Pharmaceutical University Institutes), which he chaired for more than ten years. He was involved in founding the Chemisches Landesuntersuchungsamt Nordrhein-Westfalen (Chemical Analysis Agency of the State of North Rhine-Westphalia) of which he was honorary director for eight years. Besides these accomplishments, he was engaged in other honorary activities.

Besides founding and furthering the cause of professional organizations, Kaufmann’s efforts were responsible for enhancing lipid research in Germany, specifically at the University of Münster. When Kaufmann accepted the position in Münster in 1931, he was promised that a pharmaceutical chemistry institute would be installed at the university. However, due to the dire financial situation in Germany at that time, this promise was not fulfilled. As a solution to this problem, he suggested the purchase of a large private house, which was eventually converted with only modest funds to such an institute. It was nearly completely destroyed during the war in 1943 and partially rebuilt within a year. After the war, he was instrumental in reconstituting an institute, but a new building for which Kaufmann lobbied was only constructed after his retirement. He also furthered the cause of food chemistry at the University of Münster. His educational activities in Münster, Berlin and Jena were expressed by lecturing in chemistry and pharmacy, serving as an advisor to more than 150 dissertations, and more than 1,600 students taking their examinations as pharmacists under his direction.

Kaufmann also organized educational courses for pharmacists and introduced chemists and physicians to fat analysis by means of DGF courses. He published a textbook on chemistry for physicians and a two-volume work on analysis of fats and fat products. After taking over as editor of the journal Fettchemische Umschau in 1936, he continued it as Fette und Seifen and then as Fette - Seifen - Anstrichmittel. This journal later metamorphosed into Fett - Lipid and now the European Journal of Lipid Science and Technology.

Kaufmann received numerous honors and awards for his accomplishments, among them honorary doctorates from the Free University of Berlin and the Technical University of Graz, Austria, the Normann Medal of the DGF, the German Großes Bundesverdienstkreuz (Great Federal Cross of Merit), as well as foreign ones including recognition from Egypt, Italy, and Spain. He consulted with government agencies in Turkey and Brazil and travelled to numerous countries including the United States, Egypt, Hungary, Japan, Poland and the former Soviet Union to give lectures.