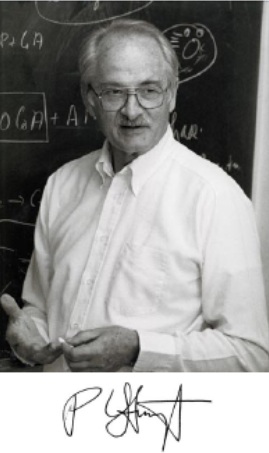 Professor Paul Karl Stumpf is considered by many to be a founder of the field of plant lipid biochemistry research. He was the mentor to many researchers in the field of oilseed biochemistry — until his retirement virtually everyone in the area of plant lipid biochemistry had come through his lab, as a student, postdoc, or visiting scholar. One of these visiting scholars, John Harwood, now the Head of the Cardiff School of Biosciences, Cardiff University, Wales, reflected on Paul’s career: “Paul was one of the main influences on my life so his passing is particularly sad to me...he had a full and long life, a career which must have given him satisfaction and a close family life.”

Paul received his PhD in Biochemistry from Columbia University in 1945, in David Green’s laboratory. He went on from there to join the University of California-Berkeley faculty as a Professor in the Division of Plant Nutrition. He was among several faculty members from this Division selected to form the Department of Plant Biochemistry. In 1958, as Department Chair, he was selected by the University Administration to help the university expand, especially in its research capacity, and he moved 60 miles east to the University of California-Davis (UC-Davis), where, together with Professors Eric Conn and Lloyd Ingraham, he established the Department of Biochemistry and Biophysics, and served four times as Department Chair. He and Eric wrote the textbook Outlines of Biochemistry, which has been used worldwide, and is probably the best-selling biochemistry text of all time. With additional co-authors, it is now in its fifth edition.

His research accomplishments elucidating the synthesis and metabolism of fats and lipids are too numerous to list here. His discovery in plants of the pathway for degrading fatty acids by alpha-oxidation stands as a singularly important achievement, as it provided the understanding of the biochemical basis for a class of human genetic defects, including Adult Refsum Disease, an inability to metabolize phytanic acid. His research provided a basic understanding of fatty acid and lipid biosynthesis in plants. Paul’s approach to science was perhaps reflected by his admiration of Impressionist paintings. He was interested in providing the science that formed the picture, without concern for minute detail. He saw research as Nobel Laureate Albert Szent-Gyorgi did, whose quotation we all saw when facing Paul in his office: “Research is seeing what others have seen, but thinking what no others have thought.” Paul was a visionary, foreseeing the impact of genetic engineering on plant research back in the 1970s, when gene cloning was still a decade in the future. Research results produced in his laboratory laid the foundation for genetic modification of oilseeds to alter their fatty acid composition. Paul wrote an interesting “autobiography” describing his perspectives of his 50 years of active lipid research (Stumpf, P.K. A Retrospective View of Plant Lipid Research, Prog. Lipid Res., 33, 1–8, 1994) (DOI: 10.1016/0163-7827(94)90003-5).

Dr. Stumpf served the American Society of Plant Physiologists (ASPP) as its president from 1979–1980, and he later chaired its board of trustees. In addition to receiving the Supelco/Nicholas Pelick AOCS Research Award in 1974, he was the recipient of many other honors and awards, including, the Stephen Hales Prize from ASPP (now called American Society of Plant Biologists) in 1974 and the ASPP Charles Reid Barnes Life Membership Award in 1992. He also received a Senior Scientist Award from the Alexander von Humboldt Foundation (Germany) and twice was selected as a Guggenheim Foundation Fellow. He was elected to the U.S. National Academy of Sciences in 1978, and the Royal Danish Academy of Sciences. 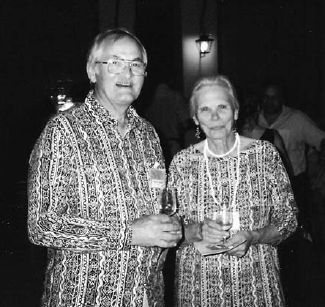 Paul and Ruth Stumpf at the International Symposium on Plant Lipids
meeting in Sevilla in 1998.

After Professor Stumpf became Emeritus at UC-Davis, he took the helm of the Competitive Grant Program at USDA-Cooperative State Research, Education, and Extension Service from 1988 to 1991 and helped develop it into the National Research Initiative. In 1999, in order to support education and research in the department he had founded, he and his wife Ruth endowed the Paul K. and Ruth R. Stumpf Professorship in Plant Biochemistry in the Molecular and Cellular Biology Department at UC-Davis.

Paul and Ruth loved to travel. Their travels included many sabbaticals and short-term excursions. It was common for such visits to be followed by the appearance of a postdoc or visiting scientist from many of the countries that he visited. In 1979, Paul was among the first U.S. scientists to visit mainland China after the “Cultural Revolution.” In 1980 he hosted one of the first Chinese visiting exchange scientists. Often when he returned from a trip he would sit down with those of us who were working in his lab at the time and explain some of the “crazy ideas” that he had picked up during his trip. Many of these ideas were brilliant hypotheses and he expected us to design experiments to test these hypotheses.

Bob Moreau remembers his returning from a trip in 1980 and talking about a recent paper which demonstrated that the desaturation of oleate to linoleate in safflower actually occurred while oleate was bound to phosphatidylcholine (Biochem. J., 179, 649–656 (1979)). Paul hypothesized that perhaps in the castor plant, the hydroxylation of oleate to form ricinoleate might also occur while oleate was bound to phosphatidylcholine, and in the months that followed, I found that this hypothesis proved to be correct (Plant Physiol,. 67, 672–676 (1981), DOI: 10.1104/pp.67.4.672). The last sentence of our 1981 paper was, “The similarities between oleate hydroxylation in castor bean and oleate desaturation in other seeds were quite striking and may have some evolutionary importance.” Future researchers confirmed that the amino acid sequences of the safflower oleate desaturase and the castor hydroxylase were very similar, and they speculated that the hydroxylase evolved from the desaturase. Tom McKeon's research on castor oil biosynthesis grew out of Paul’s work, and many of us are still following research leads originating in his laboratory. Many of Paul’s other plant lipid research contributions are being built upon by using recombinant DNA techniques. His laboratory pioneered gas chromatographic (GC) separation and identification of fatty acids and radioflow counting GC, and anyone who came through his laboratory came out well versed in the technology and the troubleshooting of these instruments.

Paul was a long-time member of AOCS, joining in 1958. In 1974, he received the Supelco/ Nicholas Pelick AOCS Research Award for Analytical Chemistry. He served as an Associate Editor of Lipids from 1976 to 1991, and on the Lipids Editorial Advisory board from 1991 to present. He was a contributor to inform and published over 250 papers throughout his career. Paul Stumpf was a mentor and a “sage” to a couple of generations of biochemists and plant scientists, so his influence and his fascination with science live on.

Professor Paul K. Stumpf passed away on Saturday, February 10, 2007, from inoperable prostate cancer, at the age of 87.