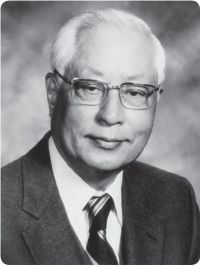 Stephen S. Chang was born in China in 1918. He received his Bachelor of Science degree in 1941 from the National Jinan University of Shanghai, worked for six years at a factory that converted tung oil into automotive fuel, and came to the United States in 1947 for graduate studies. He received his master’s degree in organic chemistry from the Kansas State University (KSU; Manhattan) in 1949 under the supervision of Fred Kummerow. Shortly thereafter, Kummerow left KSU for the University of Illinois (Urbana-Champaign), and Chang followed, receiving his doctorate from the University of Illinois in 1952. Chang’s doctoral work led to publications on the relationships of polymers to the flavor stability of soybean oil in the Journal of the American Oil Chemists’ Society (JAOCS).

After three years in a post-doctoral appointment at the University of Illinois, Chang joined the research group at Swift & Co. From 1957–1960, Chang conducted research at A.E. Staley Co. in Decatur, Illinois. Here his interest grew in using gas chromatography and infrared techniques to study flavor chemistry. Chang published the seminal study on compounds contributing to soybean oil flavor reversion.

On his voyage to the United States, Steve Chang met Lucy Ding, who also was traveling to the United States for graduate work. Chang was headed to the University of Wisconsin and Ding to the University of Missouri-Kansas City (UMKC). When Chang transferred to KSU after his major professor at Wisconsin retired, he and Ding began dating. They were married in 1952. Lucy, who had received her Bachelor of Science in chemistry in China, earned a D.D.S. degree from the UMKC. However, Lucy never practiced dentistry. Instead, she served in the Chemistry Department of the University of Illinois and later joined the American Meat Institute Foundation. When Chang returned to academia, she devoted her time and energy to supporting his career.

Chang’s major interests were always research and teaching. Thus, in 1960, Chang took a position as associate professor in the Food Science Department at Rutgers University in New Brunswick, New Jersey. When Rutgers’ Food Science Department was established in 1946, it was housed in one building and consisted of one professor (the chair) and two support staff. Department head Walter Mclinn chose “Food Science” as the department name to emphasize food-related basic science, research, and education. Moreover, he emphasized harmonious relationships among faculty, support staff, and students.

In 1948 the department moved to a remodeled building and a number of new faculty members joined the staff. The early research areas in the department included thermal process engineering and food packaging. Chang’s task was to build a program around fats and oils chemistry and flavor chemistry. He began by recruiting promising young graduate students and seeking funding from the National Soybean Processors Association to study the flavor reversion phenomena.

A Legacy of Top Scientists

His early graduate students included R.G. Krishnamurthy and Thomas Smouse, who were among the first AOCS honored students. After obtaining his Ph.D., “Krish,” as he was known by his friends and colleagues, took a position at Kraft Foods, where he spent his entire career. He received the Alton E. Bailey (1992) Award, and he was inducted as an AOCS Fellow in 1999. He served two terms on the AOCS Governing Board. Krish not only was a top researcher but was also an accomplished author and contributor to three revisions of Bailey’s Industrial Oil and Fat Products.

After finishing at Rutgers, Smouse took a position at Anderson, Clayton and Co.’s Foods Division to work with Robert R. Allen, who encouraged him to join and become active in AOCS. Smouse responded by volunteering to be the technical chair of an annual AOCS meeting, was elected to the AOCS Governing Board in 1978, and served as treasurer, vice president, and as AOCS president in 1983. In 1995, Smouse became ill, and he passed away in August that year. To honor his contributions to AOCS and the science of fats and oils, AOCS presented its Alton E. Bailey and Steven S. Chang Awards to Smouse posthumously in 1996. To further honor Smouse’s memory, the AOCS Foundation and his family established the Thomas H. Smouse Memorial Fellowship Fund to aid promising graduate students working in the area of fats, oils, and lipids.

In 1974, Chi-Tang Ho joined Rutgers’ Food Science Department to become a colleague of Steve Chang. Ho, who is still active in research, has distinguished himself as a prolific author with over 600 technical publications and numerous books and chapters. He received the Stephen S. Chang Award for lipid/flavor science from the Institute of Food Technology (IFT) and is an IFT Fellow. He has been recognized as a Fellow in the American Chemical Society (ACS), a Fellow in the Agricultural and Food Chemistry Division (AGFD) of ACS, and he received the AGFD Achievement Award for Food and Agricultural Chemistry.

In 1972, Chang supervised the move of the Food Science Department to a new facility, and by the late 1970s, he was promoted to department head and assumed increased administrative duties. With 18 faculty members conducting a diverse program in fats and oils, flavor chemistry, biochemistry, nutrition, and food engineering, Chi-Tang Ho assumed the supervision of much of the day-to-day research.

During the early 1970s, Michael Blumenthal and David Min began their studies under Chang’s supervision. Blumenthal focused on deep-fat frying and went on to start his own company, Libra Technologies (Metuchen, New Jersey). A basic problem in frying is determining at what point frying oils should be discarded. Although a number of tests had been proposed (color, free fatty acids, smoke point, polar materials), the need for a rapid, simple test easily performed by fast-food restaurant staff existed. Based on his extensive research of the chemistry of frying, Blumenthal developed test kits for measuring oil deterioration and discard point. Blumenthal has the distinction of having been awarded both the IFT and AOCS Stephen Chang Awards in the same year - 2001.

David Min (1942–2011) had a long and distinguished career at The Ohio State University (Columbus) as a professor of food science. Min maintained a long-term interest in the oxidation of soybean oil, particularly photo-oxidation and its mechanisms. He received many awards for his research, including the AOCS Alton E. Bailey Award (2007), and was elected an AOCS fellow in 2001. Min was active not only in AOCS but also in IFT. His IFT awards include the Chang (1995), the Harold Macy from the Minnesota section of IFT (2005), Fellow (2002) and Food Chemistry Division Lectureship. He was the author/editor of numerous books on lipid oxidation and flavor chemistry. Of particular note, the AOCS Press book Food Lipids, edited by C.C. Akoh and Min (2002,) is an excellent reference book and has served as a textbook for graduate courses in lipid chemistry.

Chang left a rich legacy of top scientists who entered the fats and oils profession. The Changs distributed an annual newsletter to keep former students and staff members aware of each others’ accomplishments.

Contributions to Fats and Oils Chemistry

Chang’s career spanned 40 years, during which he published over 130 technical articles. He held 20 US patents dealing mainly with natural antioxidants from plant sources. Often, a professor’s career is determined by where he or she can obtain grant money to solve a problem in industry. Although Chang’s focus was primarily on flavor chemistry, fat oxidation, the chemistry of frying, and so on, he was able to solve more applied problems. He frequently stressed that research should be aimed at specific goals. An example is his work on the causes of color in commercial oleic acid.

Chang was heavily involved in both AOCS and IFT. His AOCS involvement included working as an associate editor and an abstractor for JAOCS. He served on numerous committees, was elected to the AOCS Governing Board in 1966, as secretary in 1968, as vice president in 1969, and as AOCS president in 1970. Chang’s AOCS awards include the Alton E. Bailey Award (1974) and the AOCS/Supelco-Pelick Award in Lipid Chemistry (1979).

Although less involved with IFT governance, Chang was well known and respected as a researcher and was recognized in 1983 with IFT’s highest honor, the Nicholas-Appert Award. In addition, he was elected an IFT Fellow and received the Bohr International Award for technology transfer to underdeveloped countries.

His research accomplishments are well documented, but his humanitarian efforts are probably less familiar to the younger AOCS generation. In the early 1970s, Chang traveled to Taiwan as an advisor to the Republic of China. After visiting 14 refineries and three laboratories and presenting four major lectures, he prepared a list of 23 suggestions to improve the nation’s edible oil processing. One of these suggestions was to form a research group at one of the major Taiwanese universities and recruit a US oil chemist with both technical and academic experience to oversee the group. This bore fruit, as the American Soybean Association established a Far East group under the leadership of Lars Weidermann, who was among Chang’s former colleagues at Swift in the 1950s. Much of the expansion of soybean markets into China can be traced to Chang’s visit.

One of Chang’s goals was to promote basic research in order to ensure adequate supplies of nutritious, safe, and tasty foods to every person on earth. He asserted that, “Freedom from hunger is a basic human right; a hearty meal is one of the enduring pleasures of human life, and the selection of safe and nutritious foods is the foundation of good health.”

Philanthropic efforts of the Changs included donations to build two campus buildings in Lucy’s home town of Fuzhou, People’s Republic of China, where her father had served as university president. They also established an award for graduate students in food science in Chang’s name at his alma mater, Jinan University. The Chinese Institute of Food Science and Technology in Taiwan established the S.S. Chang fund to encourage research in food science.

Shortly after Chang retired from Rutgers in 1988, the Changs endowed the AOCS Stephen S. Chang Award with a $100,000 gift with the earnings to provide a generous honorarium and a beautiful jade horse symbolizing the award. It was first presented in 1991. His long association with IFT prompted the endowment of the Stephen S. Chang award for lipid/flavor science, which includes a generous honorarium and a beautiful Steuben crystal sculpture to commemorate the award. Several of Chang’s former students have received the award, first given in 1993.

The Changs made a significant donation toward construction of a new AOCS headquarters building, completed in 1999, where the conference room/library was designated as the “Steven S. Chang Room.”

Cook College, the land grant unit of Rutgers, is home to the Food Science Department that Chang headed for many years. The Changs made a major donation to construction of a new library for the Cook College campus, which is known as the Steve and Lucy Chang Science Library. It opened in 1995.

During his later years, Chang’s health failed, and he passed away in December 1996. True to form, Lucy Chang asked that memorials be made to the Stephen and Lucy Chang Science Library that they endowed.