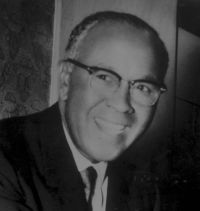 Percy Lavon Julian was born April 11, 1899, in Montgomery Alabama, USA, to James Sumner Julian and his wife Elizabeth Lena Adams. Percy was the oldest of six children and the grandson of a former slave. His father, James, was a federally employed railway mail clerk and as such their family was better off than most blacks of the day. Although, Percy had little formal school training since limited public education was available for blacks at the time, the Julian family regarded education highly due to their father's disciplined love of reading, mathematics and philosophy. This, together with their strong faith in God, gave Percy and his siblings a sound foundation and discipline to pursue higher education.

At the age of 17, in 1916 he was accepted as a sub-freshman at DePauw University in Greencastle, Indiana. This meant that in addition to his regular college courses, he took remedial classes at a nearby high school. Julian was not allowed to live in the college dormitories, so he lived in an off campus boarding home where he was refused meals. To pay his college expenses, he worked part time at a fraternity house and also as a ditch digger.

Even facing these obstacles he excelled, and in 1920, he graduated as valedictorian of his class with a chemistry degree. Although at the top of his class and wanting to further his education, Julian was discouraged from seeking graduate school admission because of potential racial issues. Instead, he took the advice of an advisor and took a position as a chemistry teacher at Fisk University, a black college in Nashville, Tennessee.

After two years at Fisk, Julian was awarded the Austin Fellowship in Chemistry and attended Harvard University in Cambridge, Massachusetts. Julian studied under Elmer P. Kohler, excelled as a graduate student, and obtained his masters degree in 1923. Again, obstacles appeared insurmountable as he pursued his doctorate degree. The university, worried that white students would resent being taught by an African American, withdrew his teaching assistantship so Julian was unable to complete his Ph.D.

This was a traumatic and disappointing blow for Julian from Harvard. He took a short-lived teaching position at West Virginia Collegiate Institute (now West Virginia State University, Institute, West Virginia), and then moved on to serve as an associate professor at Howard University in Washington, DC, and later, as head of the Department of Chemistry.

In 1929, Julian received a Rockefeller Foundation grant and the opportunity to earn his doctorate degree. Because the chemistry of natural products fascinated him, he elected to study plant alkaloid chemistry under the tutelage of Ernst Späth at the University of Vienna, Austria. Julian's doctoral work focused on the identification and isolation of complicated alkaloid structures found in plants and conjugated systems of organic compounds. Julian was noted by his peers for his neatness and contagious laugh while Späth, a critical professor, characterized Julian in these words:

"Ein ausserordentlicher Student, wie ich ihn in meiner Laufbahn als Lehrer nemals hatte (An extraordinary student, his like I have not seen before in my career as a teacher).

Julian proved to be an excellent chemist due to his single-minded persistence and careful observations of new and unexpected results. His aptitude for natural product chemistry turned into a skill that he was able to exploit in a timely manner again and again over the course of his life.

Julian received his Ph.D. in 1931 and returned to Howard University, accompanied by his friend, and a fellow doctorate, Josef Pikl. After two years there, internal politics forced them to leave and in 1933, through the efforts of his former professor William M. Blanchard, Julian returned to DePauw University with Pikl as a research fellow to teach the senior courses in organic chemistry. He made the most of the opportunity, and with Blanchard's assistance, he boldly replaced the usual senior classes, Qualitative Organic Analyses, Organic Syntheses, and Literature Studies, and gave qualified students a fundamental research problem. The result? In four years the seniors lead by Julian produced 30 senior theses that read more like doctoral dissertations than expanded senior theses. These senior theses resulted in 11 publications in the prestigious Journal of the American Chemical Society (JACS).

Meanwhile, Julian and Pikl, set an intense goal for students in Julian's own research laboratory to synthesize physostigmine, a plant alkaloid found in Calabar bean (Physostigma venenosum) extracts. These extracts were shown to cause contraction of the pupil, making it highly desirable as a medicine in the treatment of glaucoma and the target of synthetic organic chemists worldwide.

This research resulted in a series of five papers published in JACS that represented the turning point in Julian's career. The first three papers developed the step-by-step synthetic approach that described the chemistry of the needed precursors to synthesize physostigmine. The fourth paper entitled, "The Synthesis of d,l-Eserethole", was the key precursor needed to complete the physostigmine synthesis, and was about to be sent to the editor of JACS when a series of ten papers by world renowned chemist Sir Robert Robinson of Oxford (awarded the Nobel Prize in chemistry in 1947 for his investigations on plant products of biological importance, especially the alkaloids) on the identical subject were published. It appeared that Julian had been scooped by Robinson along with his aspirations to put behind him past adversities. Even more disturbing, was all the properties for Robinson's d,l-eserethole compound were different than Julian findings. One of them was in error. Because Julian was confident that his 11-step synthetic route was not flawed he altered his fourth paper to read:

Julian's bold challenge of such an eminent scientist left no room for concession. If he and Pikl were wrong both their futures as scientists would be shrouded with doubt and their careers would be effectively ended. The outcome of the challenge culminated in the fifth and final paper entitled, "The Complete Synthesis of Physostigmine". In this paper, Julian and Pikl proved conclusively their synthetic route to d,l-eserethole and physostigmine was correct and that Robinson's route was in error. Julian had finally made his mark in the scientific community as the publication of this paper received worldwide notice. Unfortunately, despite this scientific achievement, Julian was denied professorship at DePauw University because of his race and the financial difficulties of the University.

Career in Industry – A Forgotten Pioneer in Soy 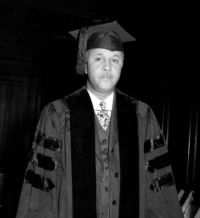 Percy Lavon Julian
(Courtesy of the Archives of DePauw University).

In conjunction with his synthesis of physostigmine, Julian had also been trying to isolate a companion alkaloid to physostigmine known as geneserin from the Calabar bean. Serendipity struck as they do on occasion in a chemistry laboratory. Julian had extracted the oil from the beans, washed the oil with dilute acid and water, and set the oil aside wet. Several weeks later, crystals had formed in the oil. Upon analysis, the crystals turned out to be stigmasterol, a sterol isolated 29 years earlier from the same plant, Physostigma venenosum. Again Julian saw a bigger picture. Familiar with work of others to prepare natural compounds based on the sterol structure, Julian wrote the Glidden Company to request five gallons of soybean oil for future experiments. Upon receiving Julian's request, the vice president of The Glidden Company (W. J. O'Brien) called him to extend an invitation for an interview as Glidden's Assistant Director of Research of the Soya Products Division. O'Brien was combing the scientific community to find the best scientific minds for Glidden's research plans, put aside the color of Julian's skin, interviewed him and hired him on the spot with a salary of $4,000/year.

Before the 1920s, soybeans were considered an industrial product only and was not utilized as a food in America. Julian arrived at Glidden in 1936 and was assigned to exploit every ingredient of the soybean. At this time, Glidden was working to develop a sludge-free, non-settling oil for its "Durkee Famous Food" division's oleo-margarine plant not to mention its use in Glidden's alkyl resin paint products. Julian was put on 24-hour call as Glidden built a new more efficient plant to process soybeans to replace an extraction processing plant that had recently been destroyed in an explosion.

The next few years were hectic for Julian and he forgot his ideas concerning stigmasterol and steroid chemistry. In his more than 18 years at Glidden, Julian solved many problems surrounding soybean oil processing, developed many products, and the Soya Products Division became Glidden's most profitable single entity. He figured out how to isolate the proteins from soybeans and a protein plant producing 40 tons of protein daily became a reality, along with the development of soy phosphatides (sold today as lecithin granules). Both of these operations became hugely successful commodities for Glidden owing to Julian's work. Julian also developed fire-retardant foam from soybean protein that became known as "Navy Bean Soup" as it was used to extinguish fires on aircraft carriers during World War II. Glidden's soybean oil became a preferred product for many, and Julian also became the Director of Research for the Durkee Famous Foods Division of Glidden in addition to his other duties. Julian built a strong research team and together they applied for more than 100 patents. By mid-1940s Glidden's Soya Products Division had a complete line of soya products from various grades of soybean oil, soy protein, soy flour, lecithin, and five feed products.

Serendipity struck again in 1940. A plant worker called Julian to tell him that water had leaked into a 100,000 gallon tank holding purified soybean oil and a white solid had accumulated in the tank. Remembering the crystals of stigmasterol that he isolated from oil of the Calabar bean, and realizing that the extremely small amounts of sterols contained in soybean oil had been concentrated in the white solid, Julian collected and analysed it. He found it to contain approximately 15 % of a mixture of soybean sterols. Julian developed a procedure to precipitate the sterols cleanly from the oil and was soon producing 100 pounds of mixed sterols daily as a by-product valued at $10,000 a day. The soy stigmasterol was easily converted into commercial quantities of the female hormone, progesterone, and the first pound of progesterone he made, valued at $63,500 was shipped to the buyer in an armored car! Soon progesterone was put on the American market in bulk at a greatly reduced cost and a healthy profit for Glidden.

From this other hormones were commercialized. In 1948, Mayo Clinic studies of the sterol, cortisone, produced by Merck at great expense using a complex 36-step synthesis starting from cattle bile acids, was found to have amazing therapeutic attributes for rheumatoid arthritis. Again, not long after the announcement of these studies, Julian worked out, patented and published a practical synthesis of a sterol precursors needed to prepare cortisone, hydrocortisone and their derivatives. 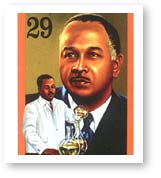 In 1953, when Glidden returned the focus of Julian's research to making paint, he left and founded Julian Laboratories in Oak Park, Illinois and Laboratorios Julian de Mexico in Mexico City, Mexico. But to keep Julian Laboratories going, Julian once again found himself facing racial discrimination in the form of denied loans from banks.

Over time the company became successful and Julian moved with his wife and two children into Oak Park, an affluent white Chicago suburb. There his home was the target of a bomb and a fire. Furthermore, he fought with the Mexican government to win approval to harvest Mexican yams used in making steroids for his Mexico processing plant. In the end, after much work, Julian Laboratories was producing cost-effective compounds used in making many medicines. It also opened the door for other black chemists as Julian Laboratories employed more black chemists than any other facility in the country. In 1961 Julian sold Julian Laboratories to Smith, Kline and French Pharmaceutical Company (now GlaxoSmithKline) for more than two million dollars, and founded Julian Research Institute, a nonprofit organization dedicated to training young research chemists, where he served as director until his death in 1975. In 1993, the United States Postal Service issued a commemorative stamp in his honor.