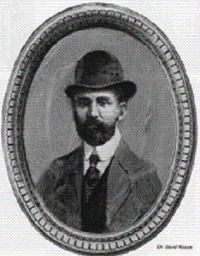 Few scientists have had more impact on the edible oils industry than David Wesson, whose vision and energy played a key role in founding the American Oil Chemists' Society (AOCS). Born on January 14, 1861, Wesson received his early education in the public schools of Brooklyn, New York, and graduated from the Massachusetts Institute of Technology (MIT) with a Bachelor of Science degree and served as an assistant to the Professor of Chemistry there.

Shortly thereafter, Wesson became interested in fats, oils and soaps, when he took a position as chief chemist for the N.K. Fairbanks Company, Chicago, Illinois, a manufacturer of animal-based compound shortenings. Typically, these products consisted of 8 parts oleostearin, 38 parts cottonseed oil, and 60 parts lard. They were so successful in the marketplace that Fairbanks gave up making pure lard. In 1890 W.J. Wilcox purchased N.K. Fairbanks, and Wesson transferred to Gutenberg, New Jersey, as chief chemist. Fairbanks, a branch of the American Oil Co., employed Wesson from 1890 to 1895. However, it appears that a number of products were marketed under the Fairbanks name up until 1919. By 1893 Wesson had developed two compound shortenings for Fairbanks, marketed under the names Columbus and Bolivar's Head.

Wesson then went into a new venture when he opened a bicycle factory, established his own laboratory, and began work on producing edible cottonseed oil about the year 1900. Operating under the name Wesson Process Company, Wesson also became manager of the technical department of the Southern Cotton Oil Company. By the winter of 1900, a plant began producing “Wesson Oil” in Savannah, Georgia. This achievement was 16 years in the making and required his engineering training and experience for success.

A key part of the process involved development of suitable deodorization techniques. Although treatment of cottonseed with fuller's earth removed the problem of color, removal of odor/flavor bodies proved more difficult and severely limited use of the oil. Deodorization in crude form was first reported in 1845 when palm oil, heated to 110°C, was treated with high-pressure steam. By 1891, Ekstein, a Fairbanks employee, succeeded in deodorizing cottonseed oil by blowing high-pressure steam through the oil at 340°F in enclosed tanks with vents at the top to permit exit of the steam and odor-bearing materials.

After Ekstein left Fairbanks, James Boyce made additional improvements. However, Wesson made the final improvement in deodorization by carrying out the operation in vacuo. Cooked flavors were avoided, and oil of superior flavor and oxidative stability resulted.

Wesson appears to have been the first fats and oils chemist (1887) to organize a quality control laboratory for systematic examination of cottonseed products, and he was the first to establish physical auditing methods for cotton mill operators. Wesson was a prolific author, writing a number of articles that appeared in Industrial and Engineering Chemistry, Transactions of the American Institute of Chemical Engineers, and the Journal of the Society of Chemical Industry as well as in various trade journals of the fats and oils industry. His many contributions to the industry include a method to determine neutral oil yields known as the Wesson Refining Loss test; methods to determine oil color; and publications describing deodorization, hydrogenation, bleaching, and solvent extraction of edible oils. Wesson served as associate editor of Oil and Soap. He was a charter member of the American Institute of Chemical Engineers and was the president of that society in 1919-20.

Wesson was a vigorous defender of the vegetable oil industry, which, through legislation, was at a disadvantage compared to the butter/dairy industry. A federal law passed in 1886 required all mixtures of lard and other fats to be labeled “compounds” rather than “refined lard” to prevent adulteration. Appearing about 1931 before a House Committee on margarine oil legislation, Wesson recalled that a sample of margarine seized under the 1886 act, when analysed by him, was rancid butter, unfit for human consumption. He went on to state that the public thought these types of products were typical of oleomargarine, whereas products made from oleo oil, neutral lard, and refined prime cottonseed oil were sweet, wholesome products and were endorsed by food experts as wholesome food, valuable in diets and especially so for people who could not afford butter. Wesson also stated that, after passage of the oleomargarine law, it was discovered that more lard was shipped out of Chicago than the hogs slaughtered could have brought in, and investigations showed that cottonseed oil and stearine were being added to pure lard and sold as refined lard. The butter industry was protected for many years by legislation that prohibited the use of coloring agents in margarine. (Older readers will recall that margarine sold in the 1950s came in a plastic bag with a pellet of coloring material located in the center of the package. To make the product look like butter, the purchaser had to knead the coloring material into the product by hand.) Wesson pointed out to the House Committee that the color of butter is influenced by diet and season of the year. Cows fed over the winter on grain, hay, and straw produce white butter, whereas, in early summer, those feeding on green pastures produce golden-colored butter. He argued that, in order for consumers not to be defrauded, all foods having artificial coloring agents should be taxed equally.

The circumstances surrounding the formation of the AOCS are told in David Wesson's own words:

"During the early days of the cottonseed business, when the cottonseed crushers held their annual conventions, prominent among the interested attendants at these meetings could be found a number of chemists whose business was to pay strict attention to the deliberations of the rules committee, which was a very august body, consisting of the leaders in the business whose function it was to promulgate rules under which the products of cottonseed were dealt in. The chief function of the chemists attending these meetings was to advise their employers [of] the effects various tests would have upon trading. Needless to say, the chemists attending these meetings were on the alert for new and improved methods, and to take advantage of the same for the benefit of their companies. These were the days of comparatively crude testing methods, most of the efforts of the chemists being expended on the evaluation of the oil and methods of refining. This was before the days of co-operation. It was a common sight to see several chemists chatting together, each man intent on telling as little as possible and learning what he could from his companions. Their methods of work were guarded with laughable secrecy, when it was considered that all had access to the same literature and trade practices. The writer remembers a luncheon when the chemists of several leading companies discussed certain methods freely, and learned they were all using exactly the same procedure, and were acquainted with the same facts. At the meeting of the International Cottonseed Crushers' Association, held in Memphis, May 18 to 20, 1909, a small group of chemists representing various industrial plants and commercial laboratories held an informal meeting. It was unanimously agreed that an organization of the cotton oil chemists would promote social feeling, permit a closer co-operation in the development of uniform analytical methods, and provide a means of research work in the interests of the cotton oil industry. A temporary organization resulted in the appointment of a committee to draft a constitution and by-laws. At the Little Rock meeting in 1910, the Society was organized under the name of "Cotton Products Analysts." This name was chosen because very few of us had received real chemical education, and had been trained as laboratory assistants, making mostly routine tests."

Wesson married in 1886 and had four children and nine grandchildren. His wife of 39 years passed away in 1925. By 1927, he had remarried shortly before the AOCS Meeting held in Memphis, Tennessee, where it was announced that the dean of oil chemists had taken a bride. Wesson was an avid sailor and owned a sloop that he sailed on Barnegat Bay. He died on May 22, 1934.

The industry mourned his death and his obituary, appearing in the June issue of the journal Oil and Soap, stated that "As a man, Dr. Wesson was very democratic and had a keen sense of humor. He was always glad and willing to help the younger men in the industry in their various problems. Dr. Wesson was beloved by all who knew him, and his friends, our society and the industry have suffered a great loss in his passing."