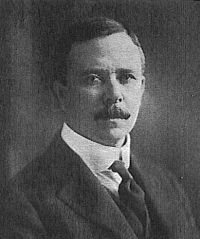 Ernst Twitchell along with Ralph Potts (1900-1981) was a pioneer in the oleochemical industry. Although Potts is often referred to as the father of the oleochemical industry, Ernst Twitchell was certainly the grandfather for, without his discovery of fat splitting in the late 1890s, methods to produce feedstocks for distillation and modification may not have been developed until much later.

Ernst Twitchell was born on February 26th 1863 in Cincinnati Ohio. His father, Henry Twitchell, was an outstanding astronomer as well as a chemist. Father Henry served as the assistant to Professor C.M. Mitchell at the Cincinnati Observatory where he developed the first chronograph. This primitive prototype later became an important tool for study in astronomy. Contributions to chemistry include the invention of a hydrometer and an acetimeter, a device for measuring the acetic acid content of vinegar. It was sold for many years at a price of 12 dollars (US Patent 99976, 1870). Henry also was a consulting engineer who projected the line of the Mobile and Ohio Railroad as well as its construction. Ernst was descended from German maternal grandparents who migrated to America in the 1850s because of political unrest. Dr. Twitchell inherited many of his ancestors’ traits of patience, thoroughness, and a delight in study and research - all of which served him well throughout his life. While quite young, his parents moved to a village near Cincinnati. He commuted to the City where he attended Woodford High School and the University of Cincinnati, where he earned a BS degree in 1886. After his first wife died, Twitchell remarried in 1893. No children resulted from the marriage.

The 1898 patent describes the catalyst as oleic acid treated with concentrated sulfuric acid and naphthalene. Melted fat was treated with 1% catalyst, mixed and half a volume of water added to an open tank. After boiling for 12-20 hours the water and gylcerine are drawn off, leaving fatty acids suitable for soap or candles.

The success of the process lead to the formation of a company under the name “The Twitchell Process Company”. Twitchell was chairman of the board and remained so until 1925 when ill health forced retirement. Early on Twitchell had little interest in commercializing the process and only after friends encouraged him to do so was the Company formed. Twitchell believed the process to be the culmination of a keen interest in research. By the year 1910, Twitchell was very well known and had endowed the Twitchell Fellowship in the Department of Chemistry at his alma mater. The University responded by conferring a Doctor of Science (honoris causa) in 1915. The American Chemical Society Section of the Society of Chemical Industry awarded Twitchell with the prestigious Perkin Medal in 1917.

The Perkin medal was founded in 1906 in commemoration of the 50th anniversary of the coal tar industry. The initial recipient was Sir William Perkin. Other recipients include Leo Baekeland, Irving Langmuir (1932, Nobel laureate, Chemistry) and Arthur D. Little. The inscription read: ”It gives me great pleasure as the representative of the affiliated Chemical and Electrochemical Societies of America, to place in your hands this beautiful Perkin Medal as a token of the appreciation and affection of your fellow chemists” Columbia University, New York. The full text of his acceptance speech is given in the Journal of Industrial and Engineering Chemistry, Vol. 9, pp 194-195, 1917.

Although best known for fat splitting, Twitchell made other discoveries in fats and oils. Among these are methods to determine rosin in fatty acid mixtures from soaps, compositional studies of fatty acid mixtures, and the eutectic behavior of fatty acids (used to obtain proper crystallization and separations. Twitchell’s method (J. Soc. Chem. Ind., p. 804, 1891) for the determination of rosin in fatty acid mixtures became the standard and was cited for giving the best results of all methods previously proposed. (J. Lewkowitsch, Chemical Technology and Analysis of Fats, Oils, and Waxes, 3rd Edition, Vol.1, 1904)

In 1825 Twitchell described a lead salt method for the determination of solid and liquid fatty acids of cottonseed, soybean, olive, peanut, lard and tallow. The method involved treatment of the sample with a hot alcoholic solution of lead acetate and allowing the precipitates to form by cooling and recovery by filtration. Analysis of the saturated acids showed iodine values of less than one. The data are in good agreement with modern values but application to the study of hydrogenation proved to be somewhat unsatisfactory since unsaturated trans acids tend to crystallize with the saturated acids (see A.S. Richardson et al. Ind. Eng. Chem. 16 (1924) 519-522). Subsequently Jackson and Callen (JAOCS, 28 (1951) p. 61) compared the Twitchell and infrared trans oleic methods and concluded that although there was fair agreement for simple mixtures of trans isomers the complexity of hydrogenated fats resulted in low values because of increasing solubility of isooleic lead salts. Nonetheless this was an important discovery at the time.

The main disadvantages of the Twitchell fat splitting methods included a batch system, long reaction times, dark colored fatty acids, formation of emulsions, high steam consumption and the variable composition of the catalyst. By the 1940s, other reagents had been introduced based on the treatment of petroleum with sulfuric acid. AOCS member A.J. Stirton et al. (JAOCS, 23,p 148) compared various fat splitting catalysts including alkylarylsulfonic and sulfoarylstearic acids, and petroleum sulfonic acids. The sulfoxystearic acid gave nearly 99 % hydrolysis in 16 hours compared to the alkylarylsulfonic acid with 97% hydrolysis in 12 hours. A petroleum sulfonic acid yielded 95% hydrolysis in 16 hours and gave the lightest colored distilled acids.

By comparison the Twitchell catalyst (naphthalene-based) gave 70% hydrolysis in 8 hours. Despite its drawbacks the Twitchell process was in use outside the US until the 1960s. By circa 1915, the bulk of soaps used in Holland, Germany and Scandinavia had been produced from fatty acids of which 75% were made by the Twitchell process. In the same year millions of kilograms of fatty acids were used in the US and all major factories had Twitchell plants. In this time-frame, low grade fats including garbage grease and cottonseed foot could be utilized by the process after distillation for color removal.

Prior to Twitchell’s work on fat splitting, fatty acids could only be obtained by the autoclave process, which was very expensive because of the copper equipment used and also required high pressures and temperatures. The process was somewhat dangerous and the production costs were too high for use in soaps and found use only in candles. Thus, at the time the Twitchell process was introduced, wooden tanks and steam temperatures allowed scale-ups, which were limited only to the size of the tank.

Twitchell’s interests extended well beyond science. His library consisted of several thousand volumes on literature, music and art. He had a long affection for the outdoors and enjoyed fishing with friends and hunting ducks along the southern shores of the USA. Twitchell joined the American Chemical Society in 1892 and served as president of the local chapter in 1896. He was of a quiet retiring disposition but made friends easily and was kind and understanding, which inspired confidence among peers and young scientists. Twitchell was very fond of animals and kept a pet cat in his laboratory. He never sought fame and sought to let his research be its own reward. A colleague paid tribute “My association with him left an impression, which contributed much to the progress and happiness of my life. Among all the men I ever knew I do not know one who as nearly faultless as he”. Ernst Twitchell passed away June 5, 1929 at the age of 66.