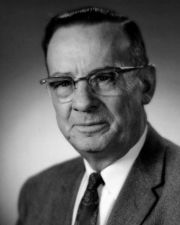 Virgil C. Mehlenbacher was born March 31, 1901 in Kensington, Minnesota, but grew up in Balfour, North Dakota and received his B.S. in chemical engineering in 1926 from Tri-State College, Angola, Indiana. He received his M.S. degree in chemistry from the University of Southern California in 1936. Later, he did additional graduate work at Rutgers University and Brooklyn Polytechnic Institute in New York City, USA.

In 1926, he began his career in fats and oils as an analytical chemist for Swift and Company and, by 1926, moved to Los Angeles to head up Swift’s laboratory there. After spending seven years in Los Angeles, he moved back to Chicago to work on special assignments for Swift. After a short tour in Chicago, he moved to the Swift plant in Newark, New Jersey. In 1941, he returned to Chicago to help Swift’s analytical methods research group where he continued in that position along with the position of Assistant Chief Chemist. In 1948, Mehlenbacher was promoted to Chief Chemist, a position he held until retirement in 1966.

Mehlenbacher Joined AOCS in 1933 and became Chairman of the EAT Analysis Committee in 1939. He also served on the Oil Characteristics Committee, Sampling Committee, Soybean Analysis Committee, Color Committee and the Seed and Meal Analysis Committee. However, Mehlenbacher’s most outstanding contribution to the society came when he became editor of the Official and Tentative Methods of the American Oil Chemists’ Society, a position he held from 1945-1950. By July 1946, Mehlenbacher reported that the methods had been completely rewritten and revised and several improvements over the previous editions were forthcoming including a larger page size. In addition, the entire layout was changed to meet the needs of analytical chemists, i.e. loose leaf in a binder, which allows the addition of new and/or revised methods. Other features included all necessary information regarding sources and specifications for apparatus and drawing with dimensions, etc. Each method was provided with a number and continuous page numbering was discontinued. Finally, the new, revised methods contained a table of contents, in which the methods are listed sectionally as well as alphabetically.

Mehlenbacher was a firm believer in the use of statistics to help define any analytical method and every method was submitted to committees for collaborative study and rewritten, incorporating the findings of the committee.

Mehlenbacher was a prolific author. In addition to the Standard Methods, he was the author of the book, “Analysis of Fats and Oils,” contributed a chapter on the determination of hydroxyl groups in organic analysis and two chapters in Scott’s Standard Methods, covering the analysis of natural fats and instrumental methods of analysis. Mehlenbacher’s original research covered a diverse program including evaluation of egg colors, a consistometer for shortening, methods to determine trichloroethylene in vegetable oils, free glycerol in soap, trace metals in foods, determination of peroxides in animal fats, estimation of monoglycerides in fats and oils, the Swift solubility test and characterization of Kapok oil. Mehlenbacher held one U.S. Patent describing the stabilization of oil issued in 1938 and, apparently, issued in Canada as well. As Chairman of the Fats and Oils Analysis Committee, he authored numerous reports published in the journal from 1944-1950.

Mehlenbacher’s technical activities went beyond AOCS. He served as the Chairman of the Analytical Methods Committee of the American Meat Institute and the National Soybean Processors Association. In addition, he served on technical committees within the National Cottonseed Products Association and ASTM.

A primary aim of the National Soybean Processors Association was to furnish standard methods for the evaluation of soybeans and by-products. The American Society for Testing Materials sought Mehlenbacher’s help in reorganizing the soap section in order to provide a more efficient working group to keep abreast of a growing demand for standardized methods of analysis. During World War II, Mehlenbacher served as an advisor to the Association of Official Agriculture Chemists and to the U.S. Quartermaster Corps for quality control of products manufactured for the U.S. armed forces.

Mehlenbacher was a man of intense energy, who, according to his supervisor at Swift, led a double life. After a full day at Swift, Mehlenbacher would work at home until midnight, either advancing his own competency or his profession.

By 1954, the North Central Section of AOCS had been formed and active. Early on, the section had planned to give an achievement award honoring the late Alton E. Bailey for his contributions to the society. The first recipient of the Alton E. Bailey Award was Virgil C. Mehlenbacher, who was honored on March 25, 1959 at a dinner held in Chicago. Among those attending were AOCS President J.C. Kinon, who commented that Mehlenbacher was a most excellent choice for the award because he was representative of the whole AOCS membership. Also, in attendance was Alton Bailey’s family, wife Dorothy and sons William and Robert.

In his acceptance speech (JAOCS 36 24-29 1959), he outlined standardization of analytical methods and their importance to the fats and oils industry. He believed that a standard method is characterized by: (1) accuracy by comparison with adequate primary standards, (2) precision established under the conditions it will be used and (3) all details have been adequately described so no variation in the manner in which it is to be carried out will result. He went on to say that analytical chemistry is the eyes through which research sees its way ahead and, normally, research cannot be much better than the analysis which guides it.

The 1910 issue of Industrial and Engineering Chemistry (Vol. 2) contains the following paragraph, “It happens too often that, every now and then, the manufacturer dealing with chemists has returned to him results which lead him to lose faith in chemists and chemical processes. This usually happens when he sends out samples to different chemists and gets different results.”

Mehlenbacher served as AOCS President in 1949 and was accorded honorary membership in 1964. MHe retired from Swift in 1966 and, the following year, travelled to Poland in efforts to improve nutrition in that country through the help of the United Nations.

After retirement, he lived in LaGrange, Illinois until his death in August, 1992. He was survived by his wife of 63 years, Helga, and two married daughters and 15 grandchildren and great-grandchildren. Coworker Stan Tierny said of him, “He could be a very stern taskmaster, but deep down was a fine individual and family man. I thought the world of him.”