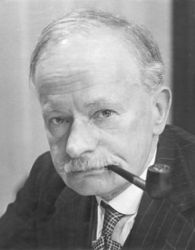 T.P. Hilditch, as he was generally known, was born in London in 1886, exactly 100 years after M.E. Chevreul and just three years before Chevreul’s death. Hilditch is said to have claimed that if his parents had been more perspicacious, they would have arranged for the two of them to meet.

Hilditch studied at University College, London, where he graduated with a Bachelor of Science degree with First Class Honors in 1907 (William Ramsay, who is credited with the discovery of the inert gases, was one of his teachers). The next four years were given to postgraduate training with Ludwig Knorr in Jena, J.A. Guye in Geneva, and Samuel Smiles in London. It was usual at that time for British graduates to seek postgraduate training in Europe, especially in Germany. In 1911 he was awarded the Doctor of Science by the University of London. By that time he had over 30 publications including two books. His early papers covered a wide range of topics including the correlation of viscosity with chemical constitution, investigations on organic sulfur compounds, and the relation between chemical composition and optical rotatory power. Most of these were published in the Journal of the Chemical Society between 1908 and 1914.

All was set for an academic appointment for Hilditch when Ramsay was approached by G.R. Crosfield of Joseph Crosfield and Sons of Warrington, England. In 1909–1910 the company was interested in catalytic hydrogenation and was seeking an additional research chemist. Ramsay advised Hilditch to “try his hand,” adding that he could return to academic work later if he so desired. Hilditch worked for Crosfield from 1911 to 1926. These were difficult years, including the years of World War I and the economic disturbance thereafter.

During the war years the company was asked to devise a synthesis of acetone from ethanol. This was achieved with acetaldehyde and acetic acid as intermediates. By the time the process was ready for production, demand had shifted to an interest in acetic acid for the production of amyl acetate to be used in airplane fabric. By the end of the war Hilditch was Chief Research Chemist and, among other activities, he embarked on the study of catalytic hydrogenation of unsaturated fats and other materials in conjunction with his colleague E.F. Armstrong. This led to an important series of 13 papers published between 1919 and 1925 in the
Proceedings of the Royal Society, Series A.

Meanwhile, some interesting events were occurring in Liverpool. James Campbell Brown, who had been professor of chemistry, died in 1910 and left the residue of his estate (upon the death of his widow) to the university to endow a Chair and Department of Industrial Chemistry. The person was to be selected by the university each time the Chair was filled. A number of members of the oil and fat industry were located on the banks of the River Mersey so that Liverpool was a suitable place to establish such a Chair.

Mrs. Campbell Brown died in 1923, and the first appointment was made in 1925, with Hilditch taking up his appointment in 1926. Hilditch continued in the appointment until his normal retiring age in 1951, but he was still writing until his death in 1965. His last publication - The study of natural fat triglycerides: Retrospect and prospect - (J. Am. Oil Chem. Soc., 42, 745-747 (1965)) - was written in connection with the T.P. Hilditch Symposium on Analysis of Natural Fat Triglycerides held in Houston earlier that year.

Most of the research papers Hilditch published between 1926 and 1955 were concerned with the fatty acid or glyceride composition of animal and vegetable fats. Related to these were accounts of new analytical procedures. In considering these, it is necessary to remember the primitive state of lipid analysis at that time. To carry out a fatty acid analysis took 2–4 weeks, and glyceride studies took as many months. He and his colleagues had no access to gas chromatography or thin-layer chromatography, and the only spectroscopic capabilities were UV-visible.

Among the procedures Hilditch devised or improved were fat analysis by ester fractionation, the use of thiocyanogen values, oxidative cleavage as a method for determining fully saturated triacylglycerols, low-temperature crystallization, and alkali-isomerization to measure linoleic and linolenic acids. He also continued his work on hydrogenation, and made studies of fatty acid oxidation and autoxidation and of cis/trans isomerism. He also clarified the structure of some fatty acids and determined the structure of others. All this now may seem pedestrian, but during the second quarter of the 20th century - when Hilditch was clearly a world leader in this area of science - it was of the utmost importance. Between 1926 and 1951 our knowledge of fat structure in terms of acids and glycerol esters was greatly extended, thanks largely to the efforts of the Liverpool school led by Hilditch.

Any successful academic extends his influence through the training of graduate students, some of whom continue to work in the same area of science. Fifty to 80 years on, there are not many of us left, but we carried the torch for 50 years after his death and passed his and our enthusiasm to another generation. Hilditch had over 80 research students, many of whom came from overseas, particularly from undivided pre-independence India. Most of his students went into industry, where their efforts were less public. Some went to research institutes or academic institutions where their work was published. Among these were J.A. Lovern (Aberdeen), C.H. Lea (Cambridge), F.B. Shorland (New Zealand), H.E. Longenecker (United States), M.M. Chakrabarty and K.T. Achaya (both in India), and F.D. Gunstone (Scotland). Several of these students are still alive, including Lea, now in his mid-nineties, who is responsible for the method of measuring peroxide value that is still in use.

Hilditch also contributed to the growth of his subject through his five books, with the most important work appearing in four editions. The first three books were published shortly after his arrival at Crosfield’s: A Concise History of Chemistry (1911, with a second edition in 1922), A First Year Physical Chemistry (1912), and A Third Year Course in Organic Chemistry (1914). In 1927 he published The Industrial Chemistry of the Fats and Waxes. I have a copy of this last and value it as a window on oil and fat chemistry 75 years ago. But his magnum opus must be The Chemical Composition of Natural Fats published in 1940, with later editions in 1947, 1956, and 1964. These were written by Hilditch on his own except that for the fourth edition he was assisted by P.N. Williams (formerly of Unilever). I treasure my copies of the second, third, and fourth editions as a link with my teacher. These collections of data and the critical comments about them served many lipid scientists for several decades. They were well respected, highly regarded, and frequently cited.

Hilditch was a member of the AOCS for many years. In 1965, I was privileged to accept the Alton E. Bailey Award on his behalf just a few months before his death. He was elected a Fellow of the Royal Society in 1942 (the highest honor that can be given to a British scientist by his peers), made a Commander of the Order of the British Empire (CBE) in 1952, and received the Chevreul medal from the French Groupement Technique des Corps Gras in 1964. The Society of Chemical Industry, based in London, gave him the Lampitt Medal in 1962 for services to the Society. He was a founding member and first chairman of the United Kingdom’s Oils and Fats Group, which was established in 1951 as a subject group within the Society of Chemical Industry and which still thrives both on its own and as a constituent of the newly formed European Federation for the Science and Technology of Lipids.

In 1994, the first article in the series “It seems like only yesterday . . .” (Inform, 5, 840-846) was written by Herb Dutton. Referring to Hilditch, he wrote: “Suffice it to say that in our correspondence, he [Hilditch] was obviously revealed as a gentleman as well as an outstanding scientist. He wrote to me, a young upstart who had, in effect, destroyed much of his even distribution theory, and I feel that you have established by your method the glyceride structure of the oils concerned - although (unfortunately for me) this proves that the low temperature crystallization procedure, that we employed, fails in the case of the more unsaturated oils to give adequate resolution. I should like to express my warm congratulations and admiration for the measure of success reached in what has been so difficult a problem.’ Few of us self-centered scientists could have written those remarks.”

Finally, I recount a personal incident from December 1943 to illustrate the true greatness of this man. It occurred on the last day in the laboratory before the Christmas holiday. I was slow to understand something that he was explaining, and he responded brusquely. That might have been the end of the incident, with one young and timid student slightly bruised. But two days later I received a letter at my home apologizing to me for his acerbity (his word - I probably had to check it in the dictionary) and hoping that I would not allow it to spoil my Christmas break. Obviously, I have not forgotten.