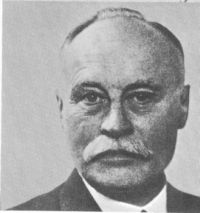 Wilhelm Normann, the discoverer of fat hydrogenation (fat hardening), was born January 16, 1870, in Petershagen, a small town on the Weser river in northern Germany, and baptized under the full name of Carl Peter Wilhelm Theodor Normann. Moving around with his parents, he attended the Friedrich-Gymnasium (Friedrich High School) in Herford and the high school in Bad Kreuznach, which he left one year before graduation in 1888 to join the Herforder Maschinenfett- und Ölfabrik (Machine Fat and Oil Company of Herford) Leprince & Siveke. This machine fat-producing company had been founded and was owned by Wilhelm Siveke, his maternal uncle. From 1888 to 1890, he managed the office of Leprince & Siveke in the harbour of Hamburg.

While his parents thought that he should obtain some background in business by working at Leprince & Siveke, his scientific inclinations caused him to study chemistry at the Fresenius Laboratory in Wiesbaden in 1890. In the following years, Normann was again in Herford, but also took courses at the then Königl. Mechn.-techn. Versuchsanstalt (Royal Mechanical Technical Experimental Station) in Charlottenburg (a part of the city of Berlin) in the Abteilung Öl-Prüfung (Unit for Oil Testing) of Holde. In 1892 he volunteered in the coal industry in Zeitz. From 1895 to 1900, Normann studied chemistry and geology at the University of Freiburg. With a dissertation entitled “Contributions on the Reaction Between Hypochlorites and Primary Aromatic Amines”, Normann obtain his doctorate in 1900. It was a distinction that Normann was admitted to the doctoral examination without having completed high school.

After obtaining his doctorate, Normann returned to the Leprince & Siveke company in Herford where he made his seminal discovery on fat hydrogenation. In late 1900, Normann became aware of the work of the Frenchmen Paul Sabatier (1854-1941) of the University of Toulouse and his assistant Jean-Baptiste Senderens (1856-1936), originally published in 1899, which described the catalytic hydrogenation of unsaturated organic compounds with finely divided nickel as catalyst. This work resulted in the Nobel Prize for Sabatier in 1912, an award he shared with another famous French chemist, Victor Grignard.

Sabatier and his co-workers had applied their hydrogenation method to the vapours of organic compounds but were unable to hydrogenate liquid organic compounds with low volatility and apparently stated that a catalyst wetted with liquid would be ineffective. However, on February 27, 1901, Normann conducted the first experiment on the hydrogenation of the double bond of oleic acid using a three-phase system liquid oleic acid-solid nickel catalyst-gaseous hydrogen. Apparently his first experiment, resulting in the formation of stearic acid from oleic acid, was successful. This experiment eventually provided the foundation for the use of liquid oils in products such as margarines and soaps. Hydrogenation of the double bond in fats and oils still constitutes one of the major industrial oleochemical processes.

A German patent 141,029, "Process for the Conversion of Unsaturated Fatty Acids or Their Glycerides into Saturated Compounds", was granted to the Leprince & Siveke company in 1903 (but effective from August 14, 1902) and also in 1903 a British patent (No. 1,515) was granted in his name only. Normann later regretted not having obtained patent protection in other countries. There is no account of Normann and Sabatier ever corresponding or collaborating in any significant fashion. Rather, Normann worried that Sabatier was continuing work on hydrogenation and that he, Normann, may not receive his patent in a timely manner.

While he was successful in applying his process to other oils and fats, including whale oil, which lost its distinctive odor upon hydrogenation, Normann had to deal with numerous problems and disappointments in adapting the process to larger, industrial-scale production. On the one hand, he had to deal with the expected technical aspects, which even included work on producing sufficient gaseous hydrogen, a problem largely solved when the dirigibles of Count Zeppelin required this gas. On the other hand, he encountered even greater difficulties in his efforts to convince other individuals of the usefulness of his invention. While he was able to convince his aging uncle to construct a modest production facility, his uncle was not willing to invest significantly in the process, partly because it would have strained the finances of the small Leprince & Siveke company and partly because of lack of understanding for the inclinations of the ingenious nephew. Eventually, the deteriorating relationship with his uncle resulted in Normann leaving Leprince & Siveke in August 1909, causing the company to abandon its hydrogenation process shortly thereafter and just before the breakthrough of industrial fat hydrogenation would occur elsewhere. With the exception of a few companies such as Sudfeldt in the town of Melle, which purchased some larger amounts of hydrogenated material and also provided some contacts, Normann also did not find any other German soap or margarine producer willing to invest in the process or otherwise cooperate in any significant fashion. Distrust towards new developments, which often did not work out as originally claimed, played a major role.

Not all cooperation with foreign companies was successful, either. In an episode that was to cause Normann some grief, the Russian company S.M. Persitz of Nizhny Novgorod sent its technical director, Wilbuschewitz, to Herford, where he was informed in detail by Normann about the process. Leprince & Siveke then agreed to license Russian rights to Persitz. However, the Russian company later claimed to be using its own inventions with Wilbuschewitz having obtained patents on what was Normann’s process and refused any payment. Eventually, the Persitz company sold its patents to another German company.

However, the British company Joseph Crosfield & Sons in Warrington, represented by its chemist E.C. Kayser (who later went to the United States and brought the hydrogenation process to Procter & Gamble) and its director K. Markel and later by others, recognized the value of Normann’s invention. While still employed by Leprince & Siveke, he cooperated with Crosfield in adapting the hydrogenation process to larger, industrial-scale production, traveling between Herford and Warrington several times. In 1909, the large-scale first industrial process was initiated at Crosfield. In 1910, Crosfield acquired the rights to the German patent from Leprince & Siveke. Normann worked in Warrington at this time. However, the financial strain placed on the Crosfield company by its efforts to develop large-scale hydrogenation forced it to soon sell its German rights to the Dutch margarine producer Jurgens. The latter built a hydrogenation plant, the Ölwerke Germania, in Emmerich, Germany, with Normann as technical director, a position he was to hold from 1911 until 1922. It an interesting twist, the patent litigation resulting from the episode with the Russian company was resolved when the Jurgens company bought the German company, the Bremen-Besigheimer Ölwerke, to which Persitz had sold the process. During Normann’s time at the Ölwerke Germania, industrial fat hydrogenation expanded considerably, with more than 20 plants world-wide in 1914.

From 1922 until the end of 1924, Normann was chief chemist and technical director at Leprince & Siveke, which had become a publicly-traded company in the meantime. His uncle had passed away in 1916. He also worked as a consultant through 1926. From 1927 to 1929, he worked in Antwerp, Belgium, at SA d’Huiles, Grasses et Produits Africains (Sapa). In 1929, he entered into a fruitful position at H. Th. Böhme AG (later Böhme-Fettchemie GmbH after its acquisition by Henkel) in Chemnitz, Germany, whose management apparently offered him understanding on both a professional and personal level. He officially retired on December 31, 1938.

Normann’s contributions to the chemistry of fats and oils extended beyond double-bond hydrogenation, although he continued to work in this area as documented by publications on various other catalysts. He published various papers on analytical methods, including some for determining non-lipid materials in fats and oils, and physical properties. Two patents (German patents 407,180 and 417,215) concerned transesterification by introducing low molecular-weight fatty acids into high-melting fats. Other work dealt with laboratory equipment up to large-scale plant equipment. Unbeknownst to him other patents preceded this work. While at Böhme-Fettchemie, he developed a high-pressure hydrogenation procedure of the carboxyl group for the production of fatty alcohols, which are precursors in the manufacture of detergents.

He received several honors, albeit late, for his accomplishments. He was awarded the Liebig Medal of the Verein Deutscher Chemiker (Society of German Chemists) in 1922, honorary membership in the Deutsche Gesellschaft für Fettforschung (DGF; German Society for Fat Research) and an honorary doctorate from the University of Münster. He did not live to formally receive the two latter honors but knew that they would be forthcoming before he passed away. The DGF now bestows the Wilhelm Normann Medal in two versions, one for outstanding contributions to fat research and one for special contributions to fat science and the DGF.

Normann also had a lively interest in geology, minoring in this field during his studies in Freiburg. In 1901, he was named a corresponding member of the state geological institute. He donated his collection of local specimens to the hometown museum of Herford.

Wilhelm Normann married Martha Uflerbäumer of Herford in 1916. Together they had one son, also named Wilhelm, who was born in 1926. Wilhelm Normann died on May 1, 1939, in Chemnitz after an extended illness.