In plants, the mobilisation of oil (triacylglycerol) is best understood in relation to seed germination. As soon as a seed germinates, it enters a phase of rapid growth and development culminating in the formation of a photosynthetically active seedling. The energy and building blocks that are necessary to support this growth period are supplied by the metabolism of storage reserve compounds that were laid down during seed development, and are derived from the mother plant [1]. The form of these reserves varies, but oil, carbohydrate and protein are usually predominant [1]. The tissue where the reserves are stored also differs considerably with species, depending on the anatomy and physiology of the seed [1]. Regardless of these variations, efficient breakdown and utilisation of stored reserves is considered to be extremely important for the rapid transition from seed to seedling [1,2]. The speed of this transition and the ability to complete it in adverse environmental conditions is crucial for a species’ reproductive success (evolutionary fitness).

Triacylglycerol is believed to be the predominant store of carbon in the majority of seed species and can account for more than 60% of the weight of the seed [1,2]. Triacylglycerol consists of three fatty acids esterified to a glycerol backbone. It is an extremely compact energy store. The complete oxidation of triacylglycerol yields more than twice the energy of protein or carbohydrate. It is most commonly located in the cotyledon or endosperm tissues of the seed, and is found in the cell cytosol in ~0.5 to 1 μm diameter lipid droplets surrounded by a phospholipid monolayer and structural proteins (oleosins), which prevent coalescence [3]. The mobilisation of triacylglycerol in seed tissues requires a complex metabolic programme that is activated following germination and enables the net conversion of oil to sugars (Fig. 1). This capacity is not present in mammals, which lack a key linking pathway called the glyoxylate cycle [1,2]. 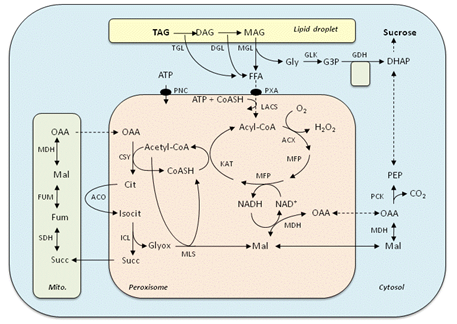 Much of our understanding of the biochemistry of oil mobilisation in plants comes from groundbreaking work using the castor bean (Ricinus communis) as an experimental system [4]. More recently the model oilseed plant Arabidopsis thaliana has provided a convenient genetic model to decipher the underlying molecular mechanisms [2]. A number of excellent reviews are available that provide a more comprehensive description of the pathways involved in triacylglycerol mobilisation in plants [e.g. 2]. Here I have simply attempted to provide a brief overview of the metabolic process and its role and regulation, with reference to genes that have been functionally characterised in Arabidopsis where appropriate.

The initial step in oil breakdown is thought to be catalysed by lipase(s), which hydrolyse triacylglycerol at the oil/water interface to yield free fatty acids and glycerol [5-7]. In Arabidopsis there is evidence that a lipase called SUGAR-DEPENDENT1, situated on the surface of the lipid droplets, performs the initial hydrolytic attack on the triacylglycerol molecule [6] to yield diacylglycerol and a free fatty acid. Other lipases, whose molecular identities are currently unknown, then enable further hydrolysis to liberate the remaining two fatty acid molecules and glycerol [6]. SUGAR-DEPENDENT1 comes from the same gene family as the lipases that are responsible for initiating triacylglycerol breakdown in mammals, insects and baker’s yeast [6]. However, it is noteworthy that biochemical studies have suggested that the mechanism of lipolysis might vary between oilseed species. It has also been proposed that hydrolysis of structural proteins and phospholipids that coat the lipid droplet might first be necessary to allow the lipases access to triacylglycerol [5,6].

The glycerol that is released from triacylglycerol hydrolysis is metabolised to the glycolytic intermediate dihydroxyacetone phosphate. In Arabidopsis this occurs via the sequential action of the enzymes glycerol kinase (GLI1) and flavin adenine dinucleotide-linked glycerol-3-phosphate dehydrogenase (SDP6), situated in the cytosol and on the mitochondrial inner membrane, respectively [2,6]. Dihydroxyacetone phosphate is then available to be converted to sugars by the process of gluconeogenesis.

Fatty acids must be transferred from the lipid body to the peroxisome (sometimes called a glyoxysome in oilseeds) and ‘activated’ to form acyl-Coenzyme A (acyl-CoA) for subsequent catabolism by β-oxidation. In Arabidopsis it has been established that an ‘adenosine triphosphate (ATP)-Binding Cassette’ transporter in the peroxisomal membrane called PEROXISOMAL ABC-TRANSPORTER1 (PXA1, CTS or PED3) is required for fatty acyl group import and that two long-chain fatty acyl-CoA synthetases called LACS6 and LACS7 situated inside the peroxisome are required for activation [2].

Despite these findings the process is likely to be more complex than the simple diffusion of fatty acids to the peroxisome and sequential action of PXA1 and LACS6/7 depicted in Figure 1 [2]. Firstly, fatty acid must bridge the cytosol, and there is circumstantial evidence to suggest that physical association between lipid droplets and peroxisome (or other organelle) membranes might enable this to occur [2,6]. Secondly, it appears that fatty acid activation must also take place outside the peroxisome, since a recent biochemical study suggests that ATP utilisation by PXA1 is dependent on acyl-CoAs and not free fatty acids [8]. Coenzyme A must enter the peroxisome by some means in order to allow fatty acid activation [2]. Indeed acyl-CoA synthetase activity also relies on ATP, and it has been shown that disruption of two adenylate transporters in the peroxisome membrane (called PNC1 and 2) blocks β-oxidation [9].

The peroxisomal β-oxidation ‘spiral’ is responsible for repeated cleavage of two carbon units (in the form of acetyl-CoA) from the carboxyl end of the fatty acyl-CoA molecule [2,7]. This pathway requires the enzymes acyl-CoA oxidase (ACX), multifunctional protein (MFP) and 3-ketoacyl-CoA thiolase (KAT) to catalyze oxidation, hydration and dehydrogenation, and thiolytic cleavage, respectively. Auxiliary activities (which are not depicted in Figure 1) are also required to enable the breakdown of fatty acids with unsaturated bonds in the cis-configuration at even-numbered carbons or unsaturated bonds at odd-numbered carbons [2].

In Arabidopsis most of the genes that are responsible for both the core and auxiliary activities of β-oxidation have now been characterised [2,7]. It is noteworthy that hydrogen peroxide (H2O2) is a by-product of acyl-CoA oxidase activity and must be detoxified by catalase inside the peroxisome and/or by ascorbate peroxidaseon the peroxisomal membrane [2]. The multifunctional protein also requires nicotinamide adenine dinucleotide (NAD+) to perform its L-3-hydroxyacyl-CoA dehydrogenase reaction and peroxisomal malate dehydrogenase (MDH), working in partnership with extra-peroxisomal enzymes, is responsible for regenerating NAD+ by participating in a ‘redox shuttle’ [2].

Acetyl-CoA derived from β-oxidation is metabolised via the glyoxylate cycle to generate four carbon organic acids (succinate and oxaloacetate) [2,4]. Two enzymes called isocitrate lyase (ICL) and malate synthase (MLS) are unique to the glyoxylate cycle and work by effectively bypassing the decarboxylative steps of the citric acid cycle. The other enzymes also participate in the citric acid cycle. Isocitrate lyase, malate synthase and citrate synthase (CSY) are localised in the peroxisome in plants, whereas the aconitase (ACO) and malate dehydrogenase enzymatic reactions required for the glyoxylate cycle occur outside the peroxisome [2]. As can be seen in Figure 1, isocitrate lyase and malate synthase generate succinate and malate. Both metabolites can be converted to oxaloacetate, and while one molecule of oxaloacetate replenishes the cycle the other supplies gluconeogenesis.

The glyoxylate cycle and β-oxidation rely on extensive movement of organic acids between the peroxisome and cytosol, although the precise nature of the transport mechanism(s) is unknown [2]. It has been proposed that oxaloacetate does not traverse the peroxisomal membrane, but is converted to aspartate by aspartate aminotransferase and that aspartate is then exchanged with the mitochondrion, along with glutamate and α-ketoglutarate [2,4]. Although the majority of acetyl-CoA generated by β-oxidation is used for anabolism in germinated oilseeds, it has been shown that in the absence of isocitrate lyase and malate synthase, peroxisomal citrate synthase can still participate in a citric acid cycle that spans the peroxisome and mitochondrion, thereby allowing β-oxidation to fuel respiration [2].

Organic acids generated by the glyoxylate cycle are metabolised to sugars via gluconeogenesis [1,2]. Sugars are then available to be transported throughout the seedling, supporting growth and development. A key step in this process is the conversion of oxaloacetate to phosphoenolpyruvate (PEP) catalysed by phosphoenolpyruvate carboxykinase [2]. It is noteworthy that ATP is consumed by this step and one quarter of the carbon is lost as CO2. Glycolytic enzymes then allow phosphoenolpyruvate to be further metabolised to sugar phosphates, which provide substrates for sucrose synthesis [2].

Upon seed germination, a coordinate induction of many of the genes involved in storage oil mobilisation occurs, and this induction generally reflects the levels of protein and enzyme activity [2]. However, the regulation of the process is relatively poorly understood. The phyto-hormones gibberellins (GAs) and abscisic acid (ABA) are well known to have a positive and negative effect on seed germination, respectively [1,2]. This antagonistic action also extends to the control of oil breakdown [2]. Oil metabolism is also governed by metabolic status and high levels of sugar repress mobilisation [2]. In Arabidopsis the APETALA2 domain–containing transcription factor ABSCISIC ACID INSENSITIVE4 (ABI4) is required for both ABA and sugar repression of oil mobilisation in the embryo [2]. However, details of ABI4’s mechanism of action remain to be resolved, and the identity of genes involved in the positive regulation of oil mobilisation is also lacking at present.

The physiological importance of oil mobilisation for seedling establishment is likely to vary depending on the species and environment. In Arabidopsis triacylglycerol makes up 35-40% of the seed’s weight and is therefore the main store of carbon [2]. A lipase double mutant (sdp1 sdp1L) that retains less than ~5% of wild type TAG hydrolytic capacity exhibits only a slight reduction in the rate of seed germination but subsequent seedling growth is strongly retarded [6]. When sown on the surface of agar plates with mineral nutrients in standard laboratory growth conditions (a diurnal cycle of 16 hours light and 8 hours dark at 20°C with 150 µmol m-2 s-1 of photosynthetically active radiation during the light) a small proportion of sdp1 sdp1L seedlings eventually develop into adult plants but most seedlings fail to attain photosynthetic competence and arrest and die (Fig. 2). 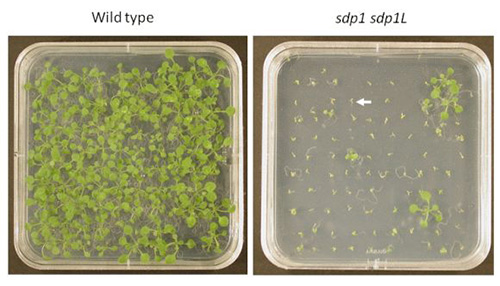 Figure 2. Seedling establishment in an Arabidopsis mutant that is deficient in triacylglycerol mobilisation. Images are of two-week-old seedlings grown on agar plates containing mineral nutrients. Arrow marks an arrested seedling that has failed to establish. The growth conditions were: a diurnal cycle of 16 hours light and 8 hours dark at 20°C with 150 µmol m-2 s-1 of photosynthetically active radiation during the light. Plates are 12 cm in diameter.