Lipids are important in many biological processes. To deliver their functions, some of them need to be transported within and across subcellular compartments during lipid metabolism. In plants cells, lipid-transfer proteins (LTPs) and acyl-CoA-binding proteins (ACBPs) have been identified as candidates for lipid transfer within the cell [reviewed in 1,2]. While LTPs are small proteins (~9 kDa), ACBPs in the model plant Arabidopsis range in size from 10 to 73 kDa. In many eukaryotes, the 10-kDa ACBP form is well studied [reviewed in 3] but there is increasing evidence that larger ACBPs, yet to be characterized, also exist. Currently, information on these larger proteins with acyl-CoA-binding domains is available from data mining of sequenced genomes.

Early investigations were focused on the 10-kDa ACBPs from mammals and yeast, and from these studies the 10-kDa ACBP has been implicated in biological roles ranging from acyl-CoA transport, maintenance of acyl-CoA pools within the cell and in the protection of acyl-CoAs in the cytosol from enzymes including acyl-CoA hydrolase, acetyl-CoA carboxylase and acyl-CoA synthetase [reviewed in 3]. Our understanding of plant ACBPs is based predominantly on investigations on Brassica napus [4,5] and the model plant Arabidopsis thaliana [2,6-21]. This review discusses findings on Arabidopsis ACBPs [2,6-21].

2.  The Arabidopsis Family of ACBPs

The six-membered ACBP family in Arabidopsis consists of ACBP1 to ACBP6, with ACBP6 being the smallest member (10.4 kDa) and ACBP4 the largest (73.2 kDa). These six ACBPs map to four distinct classes based on the presence of other protein domains besides the conserved acyl-CoA-binding domain. ACBP1 and ACBP2 each possess a C-terminal domain of ankyrin repeats, which facilitates protein-protein interactions. ACBP4 and ACBP5 show conservation in a domain of five kelch motifs, which also enable interaction with protein partners. ACBP3 lacks both ankyrin repeats and kelch motifs but it is larger (39.3 kDa) than ACBP6 (10.4 kDa), which is the smallest member and consists of only the acyl-CoA-binding domain.

The six Arabidopsis ACBPs are subcellularly located in various compartments based on experimental results using a variety of techniques including fluorescent protein tagging in confocal microscopy, immunoelectron microscopy and western blot analysis of subcellular fractions from wild-type plants as well as from transgenic plants expressing fluorescent-tagged ACBPs. These findings correspond well with the predicted localization for each ACBP. The N-terminal transmembrane domain of ACBP1 and ACBP2 targets each protein to the endoplasmic reticulum (ER) and the plasma membrane while ACBP3 is targeted extracellularly. The three other ACBPs (ACBP4, ACBP5 and ACBP6) are cytosolic proteins. These observations on the distribution of ACBPs to a variety of locations are not unexpected if ACBPs were to cater for different functions in plant lipid metabolism.

The genes encoding Arabidopsis ACBPs are scattered across Chromosomes I (ACBP6-At1g31812), III (ACBP4-At3g05420), IV (ACBP2-At4g27780, ACBP3-At4g24230 and ACBP5-At5g27630) and V (ACBP1-At5g53470). It is possible that the ACBP1/ACBP2 and ACBP4/ACBP5 pairs could have arisen from chromosomal duplication during evolution of the Arabidopsis genome. ACBP mRNAs are expressed in all plant organs with some mRNAs more highly expressed than others in specific organs, e.g. ACBP1 mRNA is more highly expressed in seeds and siliques than vegetative organs. In general, information derived from microarray databases such as Arabidopsis eFP Browser (http://bar.utoronto.ca/efp/cgi-bin/efpWeb.cgi) and Genevestigator Gene Chronologer (https://www.genevestigator.com/gv/index.jsp) support experimental data on ACBP expression obtained from investigations using Northern blot analysis and reverse-transcription-polymerase chain reaction.

The mRNAs encoding ACBPs are subject to regulation by light/dark cycling (ACBP3, ACBP4 and ACBP5), biotic stresses (ACBP4) and abiotic stresses that include induction by cold (ACBP6), and heavy metal (ACBP1 and ACBP2) treatments. There appears to be some correlation between induced ACBP mRNA expression and feasibility in utilization of the relevant ACBP cDNA in acquiring stress tolerance, e.g. ACBP6-overexpressors are freeze tolerant.

To investigate the biological functions of ACBPs, gene knockout mutants were characterized and compared to wild type for changes in phenotype and lipid composition. Often phenotypic changes were absent under normal growth conditions, and alterations in lipid content were only evident when plants were subjected to stress treatments.

As several ACBPs are responsive to stress treatments, transgenic plants overexpressing these ACBPs were subsequently generated, their lipid composition analyzed and they were subject to stress treatments. It was observed that tolerance towards various forms of stress could be conferred in resultant transgenic Arabidopsis ACBP-overexpressors. Tolerance to various forms of biotic and biotic stresses was compared to wild-type and/or vector-transformed control responses.

Observations that ACBP1 and ACBP2 are more tolerant than wild-type on medium containing heavy metals prompted further investigations as to whether "above ground" tissue in the overexpressor plants could accumulate the heavy metal. Such accumulation in these tissues would permit an application in phytoremediation, which is a cost-effective environmentally friendly process utilising green plants to remove harmful heavy metals from the environmental soil or sludge. That recombinant ACBP1 binds Pb(II) in vitro and transgenic Arabidopsis overexpressing ACBP1 canaccumulate Pb(II) in shoots implies that ACBP1 is suitable for phytoremediation. Not many plant proteins are known to possess an ability to bind and phytoremediate Pb(II), making ACBP1 somewhat unique. Many plant proteins that can bind Pb(II) often are unable to phytoremediate Pb(II), rendering them inappropriate for phytoremediation because both Pb(II)-binding and ability to transport Pb(II) from roots to shoots are prerequisites for phytoremediation.

Recombinant ACBP2 also binds Pb(II) but to a lesser extent in comparison to recombinant ACBP1. Subsequently, in vitro translated ACBP2 was shown to bind Cd(II) and Cu(II). ACBP2-overexpressing Arabidopsis displayed enhanced tolerance to Cd(II) in the growth media as well as to oxidative stress (hydrogen peroxide) treatment. Observations that recombinant ACBP1 and ACBP2 displayed ability to bind linoleoyl-CoA and linolenoyl-CoA in vitro suggest that they are likely involved in phospholipid membrane repair following lipid peroxidation arising from heavy metal and oxidative stress.

The biological functions of ACBP1 and ACBP2 were also investigated using reverse genetics. While acbp1 and acbp2 mutants are viable, the acbp1acbp2 double mutant is arrested in embryo development, suggesting that ACBP1 and ACBP2 play overlapping roles in lipid transfer during Arabidopsis embryogenesis (Fig. 1). Information from microarray databases such as Arabidopsis eFP Browser (http://bar.utoronto.ca/efp/cgi-bin/efpWeb.cgi) and Genevestigator Gene Chronologer (https://www.genevestigator.com/gv/index.jsp) is consistent with experimental data on ACBP1 expression and its significance in seed development. 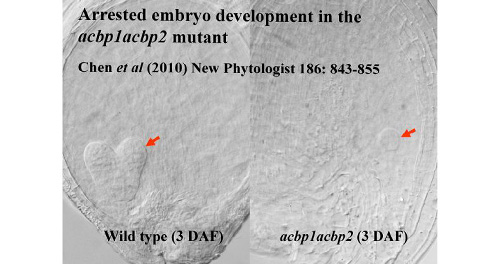 Figure 1. The acbp1acbp2 double mutant is arrested in embryo development. A wild type embryo aged 3 days after fertilization (DAF) is displayed on the left in comparison.

The ethylene-responsive element binding protein AtEBP was reported to interact with ACBP4 via its C-terminal kelch motifs. Both ACBP4 and AtEBP mRNAs are induced by the ethylene precursor, 1-aminocyclopropane-1-carboxylic acid, methyl jasmonate, and Botrytis cinerea infection, supporting a possible role for ACBP4 in plant defence. Analysis of an acbp4 knockout mutant showed reduction in membrane lipids (including digalactosyldiacylglycerol and monogalactosyldiacylglycerol, PC, PE and phosphatidylinositol (PI), which were restored to wild-type levels in the complemented lines. Given that ER-derived phosphatidic acid (PA) is needed for the biosynthesis of phospholipids PC, PE and PI in cell membranes and for galactolipid in plastids, analysis of the lipid profile of the acbp4 mutant suggest that ACBP4 could play a role in lipid transfer from the plastids to the ER. The putative role for ACBP5 in plant lipid metabolism, based on its similarity with ACBP4 in its expression profile and its preference for acyl-CoA esters, may be closely associated with that of ACBP4. Further characterization of acbp5 knockout mutants and ACBP5-overexpression lines will be needed to verify its role in lipid metabolism. That both recombinant ACBP4 and ACBP5 preferentially bind oleoyl-CoA esters rather than palmitoyl-CoA and arachidonyl-CoA esters and that recombinant ACBP4 and ACBP5 bind oleoyl-CoA better than recombinant ACBP6 would further support this proposed role in plant lipid metabolism.

Furthermore, observations of light-regulated expression of ACBP4 and ACBP5 mRNAs would be consistent with this role. ACBP4 and ACBP5 mRNAs are up-regulated in the light and down-regulated in constant darkness in contrast to ACBP6 mRNA, which showed lower expression in the light and increased expression in darkness. Interestingly, FAD which encodes omega-3-fatty acid desaturase, an enzyme involved in plastidial lipid metabolism, is also subject to regulation by light. The enzyme acetyl-CoA carboxylase (ACCase) in plants catalyzes the first committed step in de novo fatty acid biosynthesis involving production of malonyl-CoA from acetyl-CoA. De novo fatty acid biosynthesis is dependent on carbon fixation in the plastids for the generation of acetyl-CoA. Pea ACCase mRNA is light-regulated, consistent with ACCase function in fatty acid biosynthesis and in meeting the demands in plant lipid metabolism.

Observations that the ACBP6 mRNA and protein are cold (4°C)-inducible, and that the acbp6 mutant showed enhanced sensitivity to freezing (-8°C) in comparison to wild type, lead to the generation and testing of transgenic plants overexpressing ACBP6 (Fig. 2). The ability of recombinant ACBP6 in binding PC suggests that it is a potential candidate in the intracellular binding and trafficking of PC in plant phospholipid metabolism. Interestingly, in ACBP6-overexpressors which are more tolerant to freezing (-8°C) than wild type, induction of mRNA encoding phospholipase Dδ (PLDδ) which generates phosphatidic acid (PA) from phospholipids was observed. Such up-regulation in PLDδ mRNA and accumulation of PA upon freezing treatment is consistent with previous observations of PLDδ-overexpressing Arabidopsis. Lipid profiling analyses on cold-acclimated freezing-treated ACBP6-overexpressors revealed decrease in PC and increase in PA, in comparison to wild type. Such changes in PC and PA are consistent with observations of PLDδ-overexpressors. 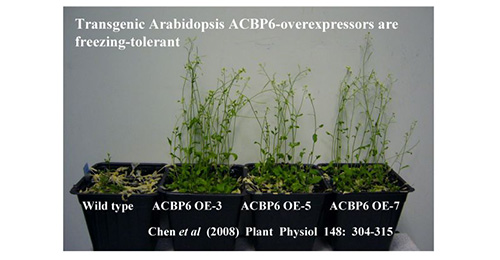