“Lipidomics” refers to detailed, comprehensive profiling of lipid molecular species, often in relation to genotype. Comparison of the lipid profiles of wild-type plants with those of plants that have been subjected to forward- or reverse-genetic manipulation, in parallel with developmental and physiological phenotyping, can aid in characterization of the roles of the manipulated genes and enzymes [e.g. 1-9]. For example, analysis of lipid changes can provide clues as to the physiological substrates and products of genetically altered enzymes [1].

In plant lipidomic analysis, quantitative information on numerous individual lipid species is typically acquired directly from organic extracts of plant material without chemical modification. Complex lipids, and especially membrane lipids, are particularly amenable to these direct, comprehensive analyses. Information related to plant lipidomics and similar to that in this article has recently been published online in The Arabidopsis Book [10].

Although it is possible to conduct a large-scale lipid analysis by traditional analytical technologies, such as thin-layer chromatography with gas chromatography, or by nuclear magnetic resonance methods, mass spectrometry is the leading technology for large-scale and rapid “lipidomic” analysis. Mass spectrometry-based lipidomics is rapid in comparison to “traditional” lipid analysis and requires relatively small amounts of material (i.e. 0.1 mg of leaf dry weight is sufficient). There are several possible mass spectrometry-based approaches. One approach is to obtain chemical formulas of intact lipid ions formed by ionization in the mass spectrometer by obtaining accurate m/z (mass/charge ratio, where z is typically = 1) by Fourier transform ion cyclotron resonance mass spectrometry [11]. An advantage of this approach is that it is conceptually simple; theoretically an analysis could be derived from a single spectrum. In practice, combining spectra acquired over small m/z ranges increases the sensitivity of this technique [12]. A disadvantage of accurate m/z as a means of lipid identification is that many chemical formulas are shared by several lipid molecular species; thus additional data are required to identify specific compounds. 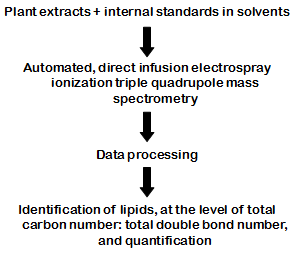 In polar lipids, the analyzed collision-induced dissociation fragment is often a head group fragment common to all members of a lipid class. For example, phosphatidylcholine molecular species, which vary in fatty acid composition, produce a common phosphocholine fragment (C5H15O4PN)+ with a single positive charge and a m/z of 184. Thus, phosphatidylcholine molecular species can be identified by the formation of a m/z 184 fragment plus the precursor (intact) ion fragment m/z. If the common fragment is charged, like the fragment produced by phosphatidylcholine molecules, a scan for the precursors of the fragment (a “precursor scan”) is the analyzed spectrum (plot of signal vs. Q1 m/z) [13]. Figure 2 illustrates the specificity afforded by use of the precursor scan mode. A single MS scan [Fig. 2A] of a directly infused extract depicts total intact ions, arising from multiple lipid classes. Figure 2B shows a precursor scan of the same directly infused extract; this scan depicts the intact ion/fragment pairs delineating lipid species within a class (phosphatidylcholines). When a group/class of lipids fragments such that its common fragment is uncharged, a neutral loss scan (rather than a precursor scan) reveals the m/z values of the lipid molecular species that contain the neutral fragment (i.e. the members of that group/class). 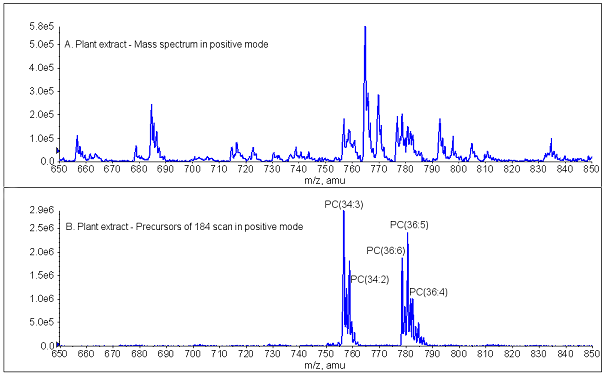 A lipid profile is assembled by sequentially carrying out a series of precursor and/or neutral loss scans characteristic of the lipid groups or classes to be analyzed while the extract is continuously infused into the mass spectrometer. Essentially, each of these scans allows identification and quantification of the molecular species of one class or group of lipids. Scans for analysis of many complex plant lipid classes are shown in Table 1.

Each precursor and neutral loss scan provides the m/z values and signals of the intact ions within a class or group. Given the class or group classification, the intact ion m/z can be interpreted as the total number of carbons and double bonds in the component acyl (or sphingosine) chains. If more complete characterization of the complex lipid molecule is required, further analysis, such as mass spectral product ion analysis to identify individual fatty acyl components, needs to be performed. Devaiah et al. [4] utilized product ion analysis to characterize many Arabidopsis polar glycerolipid molecular species in terms of fatty acyl composition.

For each detected lipid molecular species, the mass spectral signal size allows quantification. To achieve accurate quantification by direct infusion electrospray ionization triple quadrupole mass spectrometry, a large number of internal standard compounds, optimally at least two non-naturally-occurring compounds, related to the biological compounds in each class or group, are added to the plant samples [e.g. 1,4,14]. The lipid compounds in a biological mixture are quantified by comparison of the signals from the biological compounds with the signals from the internal standards. Alternatively, relative quantification among samples can be achieved by comparing mass spectral responses to an arbitrary standard compound detected with the same polarity (i.e. positive or negative mode) and scanning mode (i.e. precursor or neutral loss scanning) as the lipids of interest (e.g. detection of oxylipin-containing complex lipids [9]).

4.  Liquid Chromatography Can Be Added

Thus far, the most comprehensive lipidomics analyses have been performed by direct infusion, which allows scanning for a large number of lipid classes and species in a short time. However, separating lipid components prior to mass spectrometry by liquid chromatography can reduce ion suppression during electrospray ionization and thus increase sensitivity. Liquid chromatography can also resolve compounds, such as isomers, not resolvable by direct infusion. Liquid chromatographic mass spectral analyses of sphingolipids, other polar lipids, free oxylipins, and acyl CoAs have been performed [20-23].

Challenges remaining in lipidomics include:

The development of plant lipidomics methodology was supported by the National Science Foundation (MCB 0455318 and MCB 0920663) to RW, Xuemin Wang, Jyoti Shah, Todd Williams, and Gary Gadbury. RW is very grateful to these, other colleagues, and lab members who have contributed to plant lipidomics development.