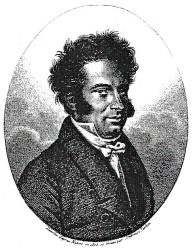 Michel Chevreul, the father of lipid chemistry, was born in Angers, France in 1786. It is not surprising that he became one of the outstanding chemists of the nineteenth century since his ancestors, dating some 200 years prior to his birth, were apothecaries, physicians or surgeons. In 1799 Chevreul entered l'Ecole Centrale in Angers where he studied languages, botany, mineralogy, mathematics, physics and chemistry.

After finishing his studies in 1803, it was time to make a career choice. Unlike his father and grandparents, he did not care for medicine and chose chemistry instead. Chevreul went to the National Museum of Natural History in Paris to study under the noted chemist, Louis Vauquelin (1763-1829) who had discovered beryllium and chromium. Vauquelin was the first chemist to separate biological materials into fats, proteins, starches and sugars, which doubtless led to Chevreul's interest in fats and oils.

Chevreul began his investigations on the nature of fats in 1811 when Vauquelin assigned him the task of examining a sample of soap. He discovered that, upon dissolving the soap in water and treating it with hydrochloric acid, the insoluble organic acids separated formed a floating layer. He then demonstrated that this layer comprised a number of distinct fatty acids. He also demonstrated that, when fats are heated in the presence of bases, glycerol (first described and named by Scheele, 1783) remained in solution while fatty acids separated. In 1814, Chevreul demonstrated that lard contained two types of triglycerides, one of which remained solid at room temperature, which he termed 'stearine' and the second, a liquid that he called 'elaine'. Chevreul's fame as a lipid chemist culminated in 1823 with the publication of his research on animal fats in which he unraveled the nature of the saponification reaction and demonstrated that fats and oils are esters of fatty acids and glycerol. Chevreul identified oleic, butyric, capric and stearic acids and cholesterol as components of animal fats. (For an English translation of Chevreul's book of 1823, see "A Chemical Study of Oils and Fats of Animal Origin", translated by A.J. Dijkstra (edited by G.R. List and J. Wisniak) and published by Dijkstra-Tucker in 2009 (distributed by AOCS Press)).

The founding of the modern candle industry is based on Chevreul’s pioneering research in this area. In 1825 he and J.L. Guy-Lussac took out a patent for the manufacture of stearic acid-based candles. For this he was awarded a prize of 12,000 francs in 1855 by the Society for the Advancement of Industry and a medal was struck honoring the occasion. In 1824 Chevreul was appointed director of the dyeing department at the Manufacture Royale des Gobelins in Paris, where he devoted the next 61 years of his life. During his tenure there he made numerous other contributions for which he is still remembered, including the chemistry of dyeing and the theory of color. Chevreul noted that every color, when placed beside another color, appears different from what it really is and equally modifies the color with which it is in proximity. This observation led to the law of simultaneous contrasts. Chevreul applied this rule to a large number of color combinations and materials, which was summarized in a 430 page book (Dedicated to Berzelius) entitled, ‘The Principles of Harmony and Contrasts of Color and Their Applications to the Arts’, including painting, interior decoration, tapestries, carpets, mosaics, colored glazing, paper staining, calico printing, letter press printing, map coloring, and dress.

Statue of Chevreul in the Jardin des Plantes, Paris
(Courtesy of Antoinel and Wikipedia).

In his later years, Chevreul recalled his official examination of a young man who had impressed him with great promise. His name was Louis Pasteur.

Numerous reporters interviewed Chevreul, most of whom were interested in his secrets for longevity. Did he drink? “No, I was never able to take a full glass of wine without upsetting my stomach.” Beer was equally distasteful to him, nor could he endure tobacco smoke. Although his son was an inveterate smoker, he was careful to keep the odor of smoke away from his father.

Although Chevreul was just a small boy during the French Revolution, he witnessed the execution of two small girls, which left him with a permanent aversion to politics.

Chevreul married in 1818. His son, Henri, born a year later, broke family tradition by not pursuing a scientific or medical career. Instead, he studied law and became a judge as well as a distinguished historian who published in a number of areas.

In 1851 Chevreul visited the Crystal Palace in London, where he was received with honors. He recalled the siege of Paris during the Franco-Prussian War (1870-1871) where he, at the age of 85, presided over meetings at which he expressed consternation that a war of invasion and defeat should obstruct the progress of science.

Although Chevreul and Michael Faraday (1791-1867) were contemporaries, they met just twice when Faraday called upon him in 1812 and again in 1845. Apparently because of their diverse interests, they had little contact. However, the subject of spiritualism versus natural phenomena held common ground for both. The period 1800-1850 brought an intense interest by the public in divining rods, pendulums and turning and talking tables (modern day Ouija Boards. Many scientists of the day believed that the human mind can control movement of the aforementioned objects. Although both Chevreul and Faraday both believed, as scientists, it was incumbent on them to correct public opinion, they approached the matter differently. Chevreul proved them wrong by publishing results of his experiments on pendulum movement (1854) and table turning (1833). On the other hand, Faraday took the matter more seriously, since he had been denounced by spiritualists. In 1852 he wrote of the necessity of “turning the tables on the table turners. Consider my age (61) and my weariness and the rapid way I am becoming more and more inert.” Faraday died in 1867 while Chevreul lived nearly another 20 years.

Chevreul received numerous honors from his peers including the Grand Cross of the Legion of Honor and the Copely Medal from the Royal Society of London of which he was elected as a foreign member. He was a prolific author having published over 800 papers as well as a number of books on dyeing (1864), a history of medical prescriptions (1865) and a four-volume history of chemistry (1866). In 1878 he published a history of the concepts of matter between 1856 and 1870 as well as a number of other books on the scientific method. The occasion of Chevreul’s 100th birthday in 1886 was a notable event during which messages, delegates and honorary degrees poured into Paris and a medal was cast in his honor.

The fact that Chevreul was nearly 103 years old when he died is remarkable enough, but his accomplishments at advanced age are even more amazing, when considering that at age 93 he was active as director of the museum, at 97 director of the dye workers at the Manufacture Royale des Gobelins. At age 101 Chevreul announced that he had changed his teaching curriculum in organic chemistry from 2 to 3 years in order to do justice to the rapidly expanding subject. He did complete the three academic years, but shortly thereafter, just shy of his 103rd birthday, on April 1889, Chevreul passed away.

His obituary appeared in Nature April 11, 1889. In part, it read, "During his long life he held many official appointments and, by his work as a chemist, he secured an eminent place among the men of science of pre-present century."

In 1963 Association Française pour l'Étude des Corps Gras (AFECG) (French Association for the Study of Fat Substances) decided to introduce the annual award of the Chevreul Medal to a French and non-French person who have made significant contribution to the development of knowledge and industrial applications in the field of fats. 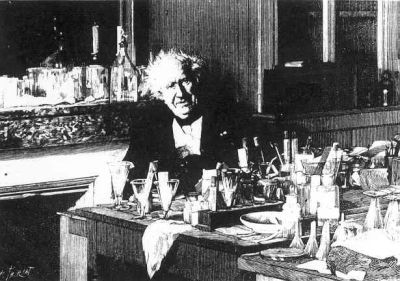 Chevreul in his laboratory in his hundredth year.

Acknowledgement: This document is based on one published originally in Inform, September, 2003, Volume 14 pp. 564-565.

Footnote: For those who wish more information, there is a well-illustrated account of Chevreul's life and work on the Dr Claude Leray's Cyberlipid website, which is in fact dedicated to the memory of Chevreul.