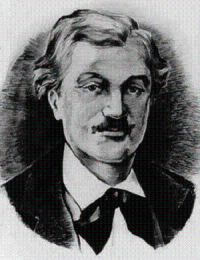 Hippolyte Mège was born October 24, 1817, in Draguigan in southern France. He began his career as a chemist at the age of 16 as an assistant in his home town. Following a period of training in Aix-en-Province, he moved to Paris, and, after a competitive examination on April 1, 1838, took a position as a pharmacist at the Hôtel Dieu hospital, which he held until 1846.

His first invention was a remedy for syphilis. Copahin, a common remedy at the time could not be taken orally by some patients. Mège treated the drug with nitric acid, which eliminated the side effects. He was awarded a prize for this achievement.

By 1850, other inventors surnamed Mège appeared. Thus, he added his mother’s maiden name to his own, and is known as Hippolyte Mège Mouriès except in official documents. Other early patents granted to him included effervescent tablets, papermaking, sugar making and the use of egg yolks for the tanning of leather.

By the late 1840’s, Mège had changed careers from pharmacy to a consulting chemist. By 1852, Mège began to carry out research on foods. He deduced, from analytical data, that some species of animals have more calcium phosphate in their blood. Thus, Mège marketed a product consisting of calcium phosphate and protein and sold it as a health food. He sent a report on the subject to the Acdemie des Sciences who encouraged his work with a contribution of 500 Francs. A member of the committee who recommended the grant was none other than Michel Chevreul, who later was to have considerable influence on Mège’s career.

From 1854-1860, Mège carried out research on bread making, but while famous at the time, this work has long been forgotten. His work allowed the preparation of 14% more white bread from wheat than previously possible. Mège lectured on his process in Berlin, Brussels and Paris and was awarded two gold medals for it. Napoleon III awarded him the Legion of Honor, largely upon Chevreul’s recommendation. However, his process was rather cumbersome and did not prove attractive to bakers because of government subsidies discouraging increased outputs of bread. However, army bakeries used the process for some time before modern milling methods made it obsolete.

By 1861, Mège had become prosperous and married, but his wife died in 1865. In the 1860s, Mège turned to fats, obtaining a patent on the cold saponification of milk - a process Chevreul was very enthusiastic about - but the discovery proved impractical.

By 1867, Mège was busily engaged in dairy research at the Imperial Farm, owned by Napoleon III, in Vincennes near Paris. He noted that starved cows, while losing weight and yielding less milk, still produced fat in the milk. He thus embarked on a program to produce butter artificially and so became a pioneer in biotechnology, which brought him lasting fame, i.e. the invention of margarine. (It is relevant to note that in 1813 Chevreul had isolated a substance from animal fat that formed pearly drops, which he thought erroneously to be a new fatty acid. He named the material margaric acid from the Greek ‘marganon’ for ‘pearl’ allowing Mège to coin the word ‘margarine’ for his invention) .

The second French empire under Napoleon III was marked by considerable economic and industrial growth. Many French citizens migrated from the farm to cities, creating a demand for butter, which could not be met. As a result butter prices soared, leading Napoleon III to offer a prize for anyone who could discover a process to manufacture a butter substitute. By 1869, the year the prize was offered, Mège had completed his work and was easily the winner.

On July 15, 1869, the French Ministry of Agriculture and Trade granted Mège a patent for 15 years for the processing and production of certain fats of animal origin and the patent was registered in England as well. By 1873, Mège received a United States Patent (146,012; 1-1-1873) entitled “Improvements in treating animal fats,” and, in part, it reads, “My invention, which is the result of physiological investigation, consists of artificially producing the natural work that is performed by the cow, when it reabsorbs its fat in order to transform the same into butter.” Shortly after the issuance of his U.S. Patent, margarine production started in the United States led by the U.S. Dairy Company of New York City.

In her book, “Margarine as a Butter Substitute,” Katherine Snodgrass presents a thorough discussion of the Mège-Mouriez (sic) process, described in the British patent dated July17, 1869. It reads: A fatty body identical in chemical composition with butter is obtained from fresh suet by crushing it between rollers under a stream of water, further washing it and then digesting it with agricultural gastric juice. The fat is extracted, melted, passed through a sieve and poured into boxes to set, after which it is cut into pieces, which are wrapped in cloths and pressed between hot plates. A fatty body is expressed and may be agitated in a closed vessel, cooled, cut up, bleached with acid and washed with water. This purified fat is mixed at animal heat (104°F) with water containing small quantities of bicarbonate of soda, casein of cold milk and mammary tissues along with yellow coloring matter. This is digested, allowed to settle, decanted and cooled and yields a preserved butter. Fresh butter is obtained by agitating the above mixture until a cream is formed, which is then treated as usual to obtain the butter.

Thus, the Mège process consists of 4 steps: (1) mincing and washing of fresh fat, (2) digestion with artificial gastric juice, (3) expression of the softer portion of the fat, ( 4) digestion and agitation of the soft fat thus obtained with milk and mammary gland extract. Step 1 contributed to improving the flavor of the fat through washing to remove non-fatty contaminants. What Mège intended to accomplish in step 2 is not clear. Either he thought it to be a special rendering or it changed the chemical nature of the fat. The latter, of course, is not true. Troost, a contemporary of Mège, stated that the purpose of digestion was to free the fat from membranes, thus preventing formation of tallow odors. Step 3, or expression of the softer fraction, does produce a product of modified composition, which resembles butter with regard to melting point and consistency to some degree. Step 4, or the emulsification process, in which the oleo stock is mixed with milk and mammary gland tissue was thought by Mège to change the chemical mixture of the fat through the action an enzyme in the cow’s udder.

In the 1870’s and for decades thereafter, it was thought that the flavor of butter resulted from the presence of volatile acids not found in other fats. Of course, today it is known that butter flavor results from the products of fermentation between milk and microorganisms. However, step 4 represents a significant discovery in that churning fat with milk does impart butter flavors and emulsification tends to impart butter texture to this product.

Mège obtained a patent for the canning of beef in 1875, and in 1880 a patent described the use of sea water salt in human nutrition.

Mège deserves credit for two important discoveries: (1) a bland neutral fat may be obtained by rendering with water at low temperature, (2) working a fat with milk tends to impart butter flavor to margarine. He died May 13, 1880 from a liver disease. Reportedly, only his hometown newspaper honored his death. He is buried, along with his wife and son, in the Pere Lachaise Cemetery in France.