PHAs (polyhydroxyalkanoates = biopolyesters) were discovered at the beginning of the 20th century by Lemoigne (1926) when observing poly(3-hydroxybutyrate) (PHB) granules inside the Gram-positive bacterium Bacillus megaterium [1].

PHAs are composed of hydroxy fatty acids and represent a complex class of intracellular storage polymers synthesized by various bacteria and archaea. PHAs are produced in the presence of excess carbon source while growth is inhibited due to limited nutrient availability. PHAs are deposited as water-insoluble granules inside the cells (Figure 1). However, under carbon starvation conditions granule-associated PHA depolymerizing enzymes degrade the PHA to provide carbon and energy.

Most prokaryotic microorganisms produce PHB which is composed of (R)-3-hydroxybutyrate with a molecular weight ranging from about 500000 to several millions. Purified PHB is a crystalline, rather brittle thermoplastic material which has been considered for bulk application to replace commodity oil-based products (Table 1).  The second major class of naturally produced PHAs is composed of medium-chain length (MCL) (R)-3-hydroxyfatty acids (6-14 carbon atoms) with molecular weights ranging from about 100000 – 500000. These PHAs are mainly produced by fluorescent pseudomonads. Purified MCL-PHAs show less crystallinity and hence enhanced elastomeric properties (Table 1). More than 150 constituents had been demonstrated to be incorporated into PHAs. Decades of PHA research were dedicated to understanding the biosynthesis pathways towards the production of these biopolymers as well as their material properties and potential applications [2, 3]. Overall, the thermoplastic properties, biodegradability and biocompatibility make these renewable materials suitable for several applications in packaging industry, medicine, pharmacy, agriculture and food industry or as raw materials for the synthesis of enantiomerically pure chemicals ((R)-3-hydroxyfatty acids) [4, 5]. 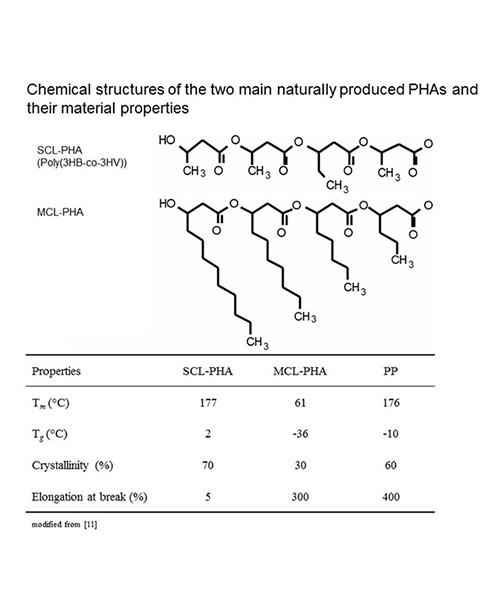 Worldwide, several companies were formed to commercialize PHAs as biodegradable plastics [5]. PHAs have been marketed as renewable and environmentally friendly bioplastics. However, the commercial success of PHA bioplastics is still hampered by their high production costs, poor material properties and processability when compared to the well-established oil-based materials.

In addition to the high molecular weight PHAs deposited as intracellular storage granules, a different form of PHAs with lower molecular weight and complexed with other macromolecules (hence termed c-PHB) had been discovered in prokaryotic and eukaryotic cells [6, 7]. c-PHBs are only found in low concentrations intracellularly or are located in the membranes of cells. c-PHB complexed with calcium polyphosphate and embedded in bacterial membranes might form ion channels and also may be involved in competence of bacterial cells i.e. for their ability to take up DNA [8, 9]. Only limited information is available about c-PHB biosynthesis.  However, in a more recent study the protein YdcS was identified in Escherichia coli as showing PHB synthase activity [10]. Primary structure analysis of YdcS suggested that it belongs to the α-/β-hydrolase superfamily that comprises PHB synthases (known for storage PHB synthesis), lipases, and esterases. YdcS was proposed as c-PHB synthase.

The key enzymes of PHA biosynthesis are the PHA synthases that catalyze the processive formation of the PHA chain [11]. Various metabolic routes are realized towards the synthesis of the activate PHA precursor, (R)-3-hydroxyacyl-coenzyme A (CoA), which serves as substrate for the PHA synthase [12] (Figure 2). 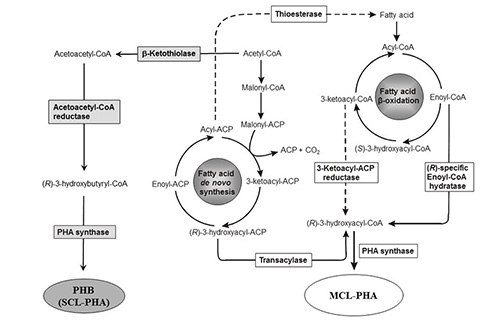 The biosynthesis of PHB begins with the condensation of two acetyl-CoA molecules catalyzed by the b–ketothiolase (PhaA) resulting in the formation of acetoacetyl-CoA which is then reduced to (R)-3-hydroxybutyryl-CoA by the (R)-specific acetoacetyl-CoA reductase (PhaB) [13]. (R)-3-Hydroxybutyryl-CoA is the activated precursor of PHB and substrate for the PHA synthase (PhaC) (Scheme 1). The genes encoding PHB biosynthesis proteins are often co-localized and organized in an operon [11] (Table 2). However, PHAs composed of MCL (R)-3-hydroxyfatty acids are synthesized diverting intermediates of fatty acid metabolism to (R)-3-hydroxyacyl-CoA and thus towards MCL-PHA (Figure 2). If the carbon source is oxidized to acetyl-CoA, excluding its formation by the fatty acid b-oxidation pathway, then intermediates of fatty acid de novo biosynthesis become the precursors for MCL-PHA biosynthesis and whose conversion is catalysed by the transacylase PhaG.

Classes of PHA synthases
PHA synthases can be divided into four main classes with respect to substrate specificity and subunit composition (Table 2). The PHA synthase belonging to classes I or II form a homodimer as soon as substrate is made available and polymerisation starts [29, 30] (Figure 3). The synthases that are actively forming the PHA chain assemble to a small PHA granule with hydrophobic PHA chains in the core and the synthases at the surface [13, 31] (Figures 4 and 5). The PHA synthases remain covalently attached to the core and move apart while the PHA granule is increasing in size [32, 33] (Figure 5). 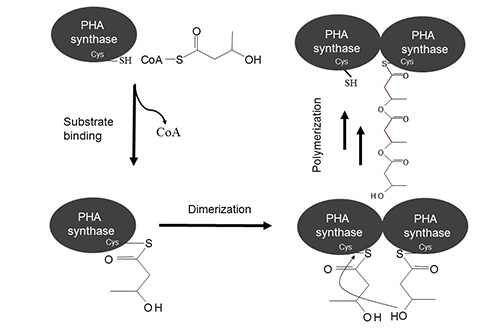 Figure 3: Proposed reaction mechanism of PHA synthases (modified according to [11]) 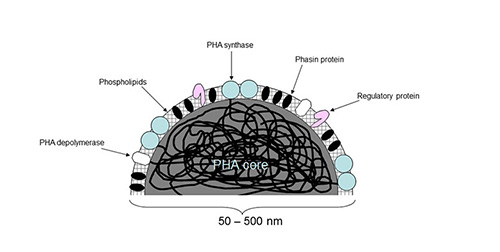 Figure 4: Schematic view of a PHA granule (modified according to [2]) 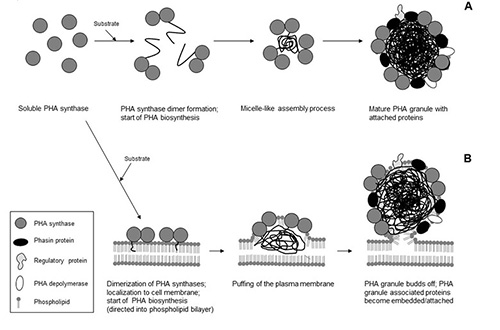 Figure 5: Models of PHA granules formation. A, Micelle model; B, Budding model (modified according to [3])

Eight conserved amino acid residues, six conserved blocks and a conserved α/β-hydrolase fold region were identified based on multiple alignment as well as a conserved domain database search of PHA synthase primary structures [11, 34]. Amino acid residues cysteine-319, aspartate-480 and histidine-508 of the model class I PHA synthase from Ralstonia eutropha are conserved in all PHA synthases and are required for covalent catalysis [11, 35, 36]. Cysteine-319 is the proposed catalytic nucleophile that is activated by the general base catalyst histidine-508 (Figure 3).

PHA synthases contain a conserved lipase box (GX[S/C]XG) in which serine at the active site is substituted by a cysteine. Moreover, conserved-domain-homology searches suggested that PHA synthases belong to the family of α/β-hydrolases containing conserved structural features as found for example in lipases. Threading models of the class I (R. eutropha) [34], of class II (P. aeruginosa) [48], and of class III (A. vinosum) [49] PHA synthases showed the α/β-hydrolase fold with its conserved catalytic triad motif (nucleophile-acid-base). A further resemblance to lipases is the increased activity of granule-bound PHA synthase compared to the soluble counterpart [50] which suggested interfacial activation that is characteristic for lipases but at the lipid-water interface.

Reaction mechanism
The catalytic triad residues, cysteine, aspartate and histidine (C149, D302 and H331 in A. vinosum or C319, D480 and H508 in R. eutropha), of the PHA synthase were proposed to be directly involved in the reaction mechanism. Structural models also suggested that these residues constitute the active site [11, 48, 51, 52]. It was also shown for class I and II synthase that substrate binding induces dimerization suggesting the involvement of two activated thiol groups each contributed by one subunits [29, 30]. Activation of active site cysteines by histidines mediates the nucleophilic attack on the thioester bond of two (R)-3-hydroxyacyl-CoA substrates. After this initiation step, both thiol groups form a thioester bond with 3-hydroxy-fatty acid (Figure 3). The elongation step involves the conserved aspartate of one subunit which activates the hydroxyl group of the bound 3-hydroxy-fatty acid that in turn attacks the thioester bond between the cysteine and the hydroxyl-fatty acid of the second subunit. Hence the nascent PHA chain remains bound to one subunit of the active dimer and the free thiol group of the other subunit can bind substrate i.e. the next building block of the PHA chain. Similar to the mechanism of the fatty acid synthase, the growing PHA chain moves from one active site to the other while being extended by one building block [53]. Alternatively as found in α/β-hydrolases only one active site might be involved in covalently binding substrate while the hydroxyacyl-CoA monomers binds non-covalently to synthase.

In vivo assembly of PHA granules

PHA granules are water-insoluble spherical inclusions inside the bacterial cell, and their detailed structure and composition has been subject to extensive investigations commencing decades ago. Early studies on PHB granule composition showed that protein and lipid were present in addition to the major component of PHB [54]. Twenty years later, high resolution 13C-NMR spectroscopy analysis of live cells showed that PHB is predominantly in a mobile amorphous state in the granule core as opposed to the solid (i.e. crystallised) state after extraction [55]. The same authors also suggested that water molecules are present within the PHB core and serve as plasticizer for the polymer. The PHA core is surrounded by a boundary layer that is composed of a phospholipid-monolayer [56] plus proteins [57] (Figure 4). These proteins that are attached to the PHA core can be subdivided into structural proteins, the phasins, the PHA synthase, the intracellular PHA depolymerase, and regulator proteins [58, 59]. Contrast-variation small-angle neutron scattering (SANS) has confirmed the presence of a phospholipid-monolayer [60]. Atomic force microscopy (AFM) studies provided further evidence for a phospholipid monolayer boundary and additionally suggested complex structures such as cytoskeleton-like phasin based scaffold at the granule surface [61, 62].

Two models of PHA granule assembly are currently being discussed: the “micelle” and the “budding” model (Figure 5). In the “micelle” model, the randomly distributed cytosolic PHA synthase begins to synthesize the PHA chain converting the soluble synthase into an amphipathic PHA:enzyme complex which self-organizes into a small micelle with a PHA core and the PHA synthase at the surface. Continuous PHA synthesis causes the PHA inclusion to increase in size and phospholipids, as well as proteins, become incorporated into the PHA granule surface. The strongest support for the micelle model is provided by in vitro PHA granule formation and by in vivo studies using fluorescently labelled PHA synthase [50, 63].

In contrast, the “budding” model requires the PHA synthase to locate to the cytoplasmic membrane thereby catalysing synthesis of PHA into the hydrophobic space between the phospholipid layers which ultimately results in the PHA granules budding off from the membrane. Budding would coat the granules with a phospholipid monolayer in which proteins become embedded.

Peters and Rehm (2005) used fluorescence microscopy with a fluorescently-labelled PHA synthase that showed that emerging PHA granules located to the cell poles and to the mid-cell for the creation of (?) future cell poles [63]. Neither the Z-ring (septum) formation nor PHA chain synthesis impacted localization of the PHA synthase within the cell but chromosome condensation had an influence [63, 65].

Jendrossek [66] applied fluorescence microscopy using Nile Red staining of PHA granules and fluorescently-labelled phasins which showed that emerging PHA granules were often found close to the cell poles as well as to the cytoplasmic membrane.

Further PHA-accumulating bacteria were studied which revealed a common localisation either close to the cytoplasmic membrane or the cell poles more in alignment with budding model. However, since granules are formed in vitro when purified, soluble PHA synthase is exposed to substrate, a membrane environment does not seem to be essential for granule assembly which is in favour of the micelle model.

After disruption of cells that are accumulating, PHA granules could be isolated, purified and stably maintained as spherical shell-core particles outside the cell. This property has led to extensive protein engineering approaches targeting proteins specifically interacting with the PHA core such as e.g. PHA synthases or phasins. The proteins have been engineered by translationally fusing or inserting protein-based functions such as e.g. binding domains, antigens, enzymes or fluorescent proteins [31, 59, 67] (Figure 6). These functions are localized to the surface of isolated PHA granules and their respective uses, such as in bioseparations, vaccines, enzyme immobilisation or diagnostics, was demonstrated [68-71]. The engineering of surface functions into PHA granules has opened up a new avenue for the potential commercialisation of PHAs. 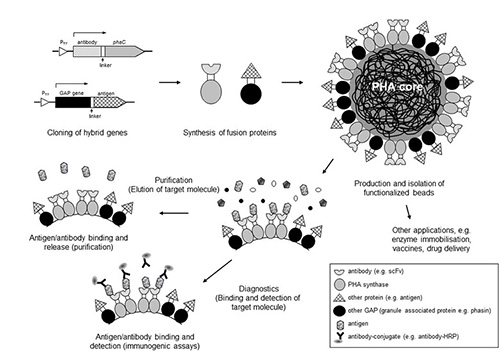 Figure 6: Funtionalization of PHA granules as biobeads (modified according to [59]).