Several different denominations for the native species of Caryocar genus [C. brasiliense (from Cerrado, Amazônia, Caatinga, and Atlantic Rainforest), C. villosum (Amazonian) and C. coriaceum (found in Araripe region, Ceará, Brazil), among others] have been given, such as, pequi, pequierim, pequiá, pequi-rasteiro [1]. The name Pequi will be used hereinafter, unless specified.

Pequi is a yellow to orange strong flavored fruit of a perennial tree (Figure 1) adapted to low fertility soil and is regarded as important for sustainable development of the Brazilian savanna (Cerrado). It contains spiny seeds; however, a non-spiny species has also been found. 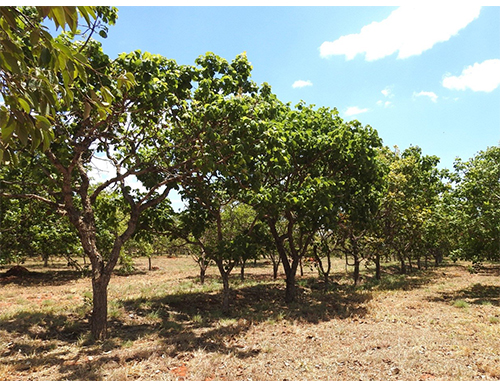 Despite studies demonstrating that best management practices may enable the tree planting, Pequi fruit is still obtained by extractive activities. In order to preserve the plant, the fruit is collected after falling to the ground and it is traditionally used in local culinary as well as to obtain several marketable products, such as fruit preserves and oils both from the mesocarp (pulp) (36-66% d.b. of fruit) and the kernel (14-48% w.b.) [2,3].

Extraction process
Pequi oil is obtained by handcrafted methods. Basically, the manually peeled fruit is boiled in water and stirred until the oil rises the surface and is skimmed with a spoon. Alternatively, after cooling, the peeled fruit is brought down to room temperature, macerated and the oil rises to the surface as soon as cold water is added and is skimmed with a spoon. The oil is dried by heating and finally, filtered through cotton cloth [4]. This process provides a certain chemical instability, reducing its shelf life; nevertheless, it is an unrefined and cold pressed oil with preserved bioactives.

Location and fruit species may affect the triacylglycerol composition and further studies showing these differences are necessary. Table 2 displays triacylglycerol composition of one of the main Pequi species, whose content of POP (and not PPO) is relatively high. New sources of POP, one of the symmetrical triacylglycerol responsible for cocoa butter functionality, have been pursued by confectionery industry as cocoa butter equivalents (CBEs), such as palm mid fraction (66% POP). In other sources of CBE, also frequently used in a fractionated form, such as illipe, shea stearin, and mango kernel stearin, the content of POP is approximately 7%, 1%, and 1%, respectively, with higher content of other cocoa butter typical triacylglycerols (POS, SOS) [9].

Concerning bioactive compounds, around 400 mg/kg of carotenoid in Pequi oil (I) have been reported [5].

Pequi contains a balanced proportion of palmitic and oleic acid, leading to phase separation at room temperature in tropical countries, i.e., countries of origin. Furthermore, the fatty acid and the triacylglycerol composition result in a lack of functionality regarding its industrial application [5]. However, chemical and enzymatic changes in triacylglycerols have been shown both for the purpose of improving functionality indirect application or providing structure [5], as well as attempting to obtain a cocoa butter-like fat [7].

Pequi oil triacylglycerol composition may vary according to the origin or species of I and consequently offers a set of different products. Due to the high content of POP in Pequi (I) as well as trioleic and dioleic acid triacylglycerols [5], this species presents high added value for both chocolate and high oleic oils industries.