Phospholipids are a class of lipids that consist of two fatty acyl molecules esterified at the sn-1 and sn-2 positions of glycerol, and contain a head group linked by a phosphate residue at the sn-3 position. 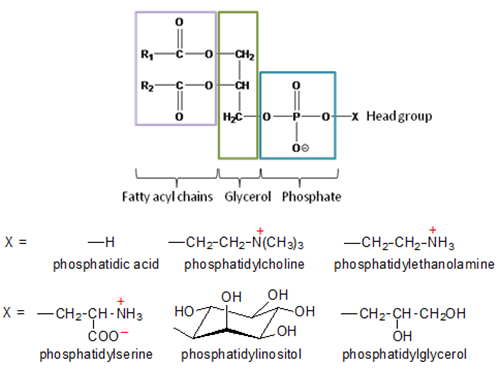 The head group forms a hydrophilic region and determines the type of phospholipid. The fatty acyl side chains are hydrophobic; this amphipathic property of phospholipids provides the basis for the compartmentalization of cells. Phospholipids are the main constituent of biological membranes. The size, shape, charge, and chemical composition of different phospholipid classes play a role in the formation and maintenance of the plasma membrane bilayer of cells, as well as membranes surrounding subcellular organelles and vesicles. An asymmetric distribution of phospholipid types within the membrane imparts different functional characteristics between the inner and outer leaflets. Phospholipids are involved in stabilizing proteins within the membrane, facilitating the active conformational structure of proteins, and as cofactors in enzymatic reactions. Phospholipids are essential for the absorption, transport and storage of lipids. Phospholipids are secreted into the bile to aid in the digestion and absorption of dietary fat. They form the monolayer on the surface of lipoproteins which function to transport neutral lipids throughout the body. Finally, phospholipids serve as a reservoir for signalling molecules, such as arachidonic acid, phosphatidate, diacylglycerol and inositol trisphosphate.

The scope of this review is the biological function and synthesis of the most abundant phospholipids in mammalian cells: phosphatidylcholine, phosphatidylethanolamine and phosphatidylserine. Information gleaned from studies in knockout mice will highlight the novel links between phospholipid biosynthesis and various chronic conditions, including diabetes, obesity, fatty liver and cardiovascular diseases.

While quantitatively a minor component of membrane phospholipids, phosphatidic acid forms the backbone on which the synthesis of other phospholipid species and triacylglycerol is based.

PC accounts for approximately 50% of total cellular phospholipids and is the most abundant phospholipid in mammalian membranes. Most of the PC in the plasma membrane is found within the outer leaflet. PC is cylindrical in shape; as such, it is an important structural component that contributes to the integrity and function of membranes. PC is essential for the formation and secretion of very-low-density lipoproteins by the liver, which is responsible for the delivery of hydrophobic cargo (cholesterol and energy in the form of fat) to other organs. This phospholipid also plays a role in bile salt-mediated micelle formation in the intestinal lumen, which facilitates the absorption of lipid-soluble nutrients from the diet. 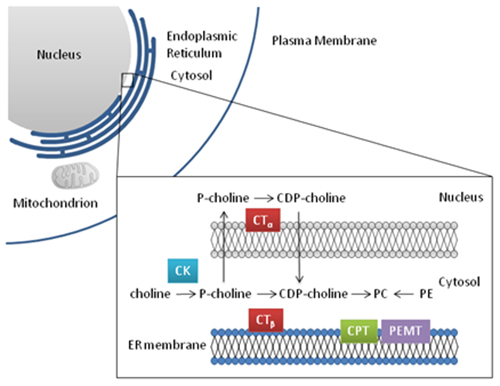 All nucleated mammalian cells synthesize PC via the CDP-choline pathway. Choline entering the cell is rapidly phosphorylated by choline kinase, converting choline to phosphocholine. Two genes encode the proteins, choline kinase α and β, that are responsible for this phosphorylation. These cytosolic proteins interact to form homo- or heterodimers with increasing levels of activity in the order of: β/β, α/β, α/α.

The second enzyme in this pathway, CTP:phosphocholine cytidylyltransferase (CT), facilitates the conversion of phosphocholine to CDP-choline. There are two isoforms of CTP:phosphocholine cytidylyltransferase, CTα and CTβ, which are encoded by two different genes. Although these isoforms perform the same enzymatic reaction, they differ structurally in two significant ways. CTα contains an amino-terminal nuclear localization sequence which targets CTα to the nucleus. CTβ lacks this nuclear localization sequence and is found outside of the nucleus, primarily in the cytosol of the cell. The two isoforms also differ in the length of the phosphorylation domain found at the carboxyl terminus. This region is significantly longer in CTα and truncated in the CTβ isoform.

The addition of the phosphocholine moiety to diacylglycerol completes the synthesis of PC. This reaction is catalyzed by CDP-choline:1,2-diacylgylcerol cholinephosphotransferase, or CPT, and occurs at the surface of the endoplasmic reticulum.

The second pathway for PC synthesis is the phosphatidylethanolamine N-methyltransferase (PEMT) pathway. PC production via the PEMT pathway occurs primarily in the liver, where the demand for PC is high due to the production and secretion of very-low-density lipoproteins and PC secretion in bile, in addition to the normal cellular requirement for the synthesis of membranes. PEMT is an intrinsic membrane protein, containing four membrane-spanning domains. PEMT is active in the endoplasmic reticulum, where it performs three repeated methylation reactions converting phosphatidylethanolamine (PE) to PC. The methyl donor S-adenosylmethionine is required for each step of the reaction, generating three molecules of S-adenosylhomocysteine for each PC molecule produced. This mechanism contributes approximately 30% of PC produced in the liver, when choline supply is adequate to maintain PC synthesis through the CDP-choline pathway. However, when choline is limiting in the diet, the PEMT pathway is critical for maintaining the supply of PC in the liver.

Synthesis of PC via the CDP-pathway is dependent on substrate availability; adequate choline and CTP must be supplied. In addition, a source of diacylglycerol is required. The rate-limiting enzyme in the CDP-choline pathway is CT. This enzyme exists in a soluble form, which acts as an inactive reservoir. When the enzyme forms an association with lipids within the membrane, it acquires a greater affinity for its substrate, CTP. Lipids that stimulate CT activity include phosphatidylglycerol, oleic acid, and diacylglyerol. The reversible translocation of CT serves to regulate the activity of PC synthesis through the CDP-choline pathway. Translocation is regulated by phosphorylation of the enzyme, promoting the soluble inactive configuration, and dephosphorylation, favouring the active-membrane associated form.

The CDP-choline pathway and the PEMT pathway may be reciprocally regulated. PEMT activity is increased when choline supply is limiting for PC synthesis via the CDP-choline pathway. PC production by PEMT is also dependent on an adequate supply of substrates, including PE and S-adenosylmethionine. An accumulation of S-adenosylhomocysteine inhibits the methylation of PE.

Global CT knockout: Global deletion of CTα results is embryonic lethality. The CTβ knockout animals survive and grow normally; however, they do display gonadal deformation leading to sterility. Deletion of CTβ impairs axon branching in the brain, but the physiological consequence of such a phenotype is currently undefined.

PEMT: PEMT-/- mice, the first knockout model related to phospholipid biosynthesis produced, survive and grow normally; however, when fed a choline-deficient diet these mice die within 5 days due to liver failure. This liver failure is prevented by adding choline back to the diet or by preventing PC secretion into the bile (by deleting the multiple drug resistance-2 protein). When PEMT-/- mice are crossed with multiple drug resistance-2-/- mice, the double knockout mice live for months on a choline-deficient diet.

Like CT, PEMT activity is very important for normal lipid and lipoprotein metabolism. PEMT-/- mice have impaired VLDL secretion that leads to steatosis (fatty liver). Pemt-/- mice also have low plasma high-density lipoprotein levels compared to wild-type controls. Increased hepatic HDL uptake, due to induced expression of scavenger receptor protein beta-1, also known as the HDL receptor, is responsible for the reduction in circulating HDL levels in the Pemt-/- mice. The diminished levels of plasma lipids observed when PEMT activity is missing reduce the occurrence of atherosclerosis, as observed in the PEMT/low-density lipoprotein receptor double knockout, and heart disease, as observed in the PEMT/Apolipoprotein E double knockout.

A link between PEMT and whole body energy expenditure has recently been established. When PEMT-/- mice were fed a high-fat diet they were protected from obesity and insulin resistance. Interestingly, this phenotype was reversed by supplementing the high-fat diet with extra choline.

PE is the second most abundant phospholipid in mammalian membranes, contributing 20-30% of total phospholipid content. It is found in greater abundance in the inner leaflet of the plasma membrane, with approximately 20% of plasma membrane PE found on the outer leaflet. PE has a relatively small head group, which can accommodate the insertion of proteins within the membrane while still maintaining the integrity of the membrane. Another characteristic of PE arising from the small head group size is the propensity to form non-bilayer structures. This is important in the formation of new membranes and vesicles, as well as membrane fusion and budding processes.

PE is also enriched in the membranes of mitochondria and is essential for the growth and stability of these energy-producing organelles. PE is used in the production of glycosylphosphatidylinositol, which facilitates the anchoring of proteins to the membrane. 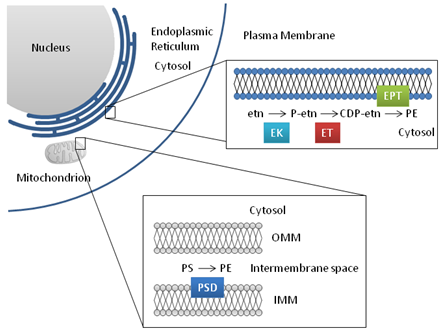 In a process that mirrors PC synthesis, PE is also made via the CDP-ethanolamine pathway, using ethanolamine as the substrate. Ethanolamine is phosphorylated to form the head group of PE by ethanolamine kinase (EK) in the cytosol. Phosphoethanolamine reacts with CTP to form CDP-phosphoethanolamine through the action of a cytosolic protein, CTP:phosphoethanolamine cytidylyltransferase (ET). Alternative splicing of the ET transcript yields two isoforms of this protein with different levels of enzymatic activity. The α-isoform is 18 amino acids longer and shows a higher substrate affinity compared with the β isoform. Tissue expression of ETα is also relatively higher. Similar to CT, the ET protein forms a homo- or heterodimer. In the final step, phosphoethanolamine is attached to the sn-3 position of diacylglycerol. This reaction is catalyzed by CDP-ethanolamine:1,2-diacylglycerol ethanolaminephosphotransfease (EPT) in the endoplasmic reticulum and yields the end product PE.

ET is the rate-limiting enzyme in the CDP-ethanolamine pathway. This reaction is dependent on the supply of both CDP-ethanolamine and diacylglycerol. Proximity of this cytosolic protein to the endoplasmic reticulum, where the membrane-bound enzymes of this pathway are located, is also important for ET activity.

ET: Disruption of the gene encoding ET, Pcyt2, results in embryonic lethality prior to E8.5. Mice heterozygous for the ET gene accumulate fat in liver and adipose due to increased lipogenesis and reduced utilization of fat as an energy substrate. Liver-specific ET knockout mice grow normally but display defects in hepatic lipid metabolism. Hepatic PE is reduced to half of the normal levels, despite an upregulation of the PSD pathway. These mice also have increased triacylglycerol synthesis and develop fatty liver, as a result.

PSD: Deletion of Pisd, the gene encoding PSD, causes death between days 8-10 of embryonic development. Mitochondria appear rounded and are diffuse in PSD-deficient cells, indicating a deficiency of PE produced via the PSD-pathway impairs mitochondrial development.

PS accounts for 5-10% of cellular phospholipids. It is found in greatest abundance in the inner face of the plasma membrane. Externalization of PS to the outer layer of the membrane is an important signalling mechanism for blood clotting and prompts the phagocytosis of apoptotic cells. Newly synthesized PS is an important precursor to PE in the mitochondrion. One interesting characteristic of PS is the anionic character of the serine head group (see Fig. 1). This allows for interactions between positively charged proteins and PS in the inner membrane and may facilitate contact between proteins and their membrane-bound receptors. PS has a stimulatory effect on protein kinase C, which is responsible for a number of cellular responses to stimuli. 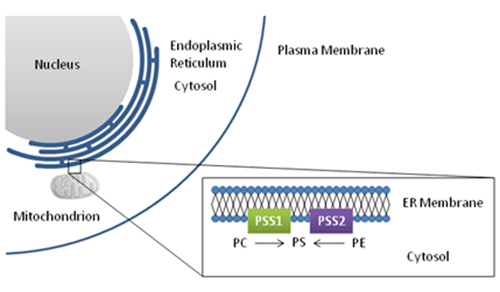 PS synthesis is strongly regulated by product inhibition. This mechanism involves an interaction with a key arginine residue in the phosphatidylserine synthase proteins, Arg-95 in PSS1 and a corresponding Arg-97 in PSS2. PSS1 has been shown to be transcriptionally regulated in the brain.

PSS1 and PSS2: PSS1 knockout significantly reduces total serine-exchange activity. However, while the amount of PS in liver was found to be reduced, phospholipid levels remained similar to wild-type animals in other tissues. Gene deletion of PSS2 does not have a significant effect on phospholipid metabolism, due to compensatory increases in the activity of the PSS1 enzyme. Due to its high expression, male PSS2-/- develop smaller testis and approximately 10% are infertile. Deficiency of phosphatidylserine synthase activity through a PSS1/PSS2 double knockout causes death in utero.

Phospholipids have long been known to be critical components of various cellular processes. Through the creation of knockout mice, phospholipid biosynthesis has been shown to influence the development of several chronic diseases, such as atherosclerosis and cardiovascular disease, steatohepatitis, muscular dystrophy and diabetes.