Schaffer and Lodish discovered FATP by use of an expression cloning strategy in adipocytes [4]. The expression of this 63 kDa integral membrane protein in a stable fibroblast cell line resulted in a 3-4 fold increase in long-chain fatty acid transport. Identification of this first FATP led to the discovery of several other isoforms of FATP (FATP1-6) [4]. FATP1 is predominantly expressed in heart and skeletal muscles [5]. FATP2 and FATP5 are expressed mainly in liver, where they are involved in hepatic lipid metabolism in association with acyl-CoA synthetase. FATP4 is essential for absorption of dietary lipids and has a critical role in normal skin structure and function. To date, FATP3 and FATP6 have been shown to have little or no fatty acid transport function [5].

The role of the membrane protein CD36/FAT in fatty acid uptake and β-oxidation in mammals has been studied extensively. CD36/FAT is an 88 kDa fatty acid translocase membrane protein expressed in proportion to the rate of fatty acid oxidation in muscle tissue (for example, it is expressed more in the heart than in skeletal muscle) [2]. CD36/FAT is involved in angiogenesis and inflammation, as well as lipid metabolism. Transfection of fibroblasts with CD36/FAT resulted in increased rates of fatty acid uptake [6]. Unlike FATP, CD36/FAT has the ability to translocate between intracellular endosomes and the plasma membrane of cells, which enables CD36/FAT to play a critical role in fatty acid uptake regulation. Insulin and muscular contraction can stimulate CD36/FAT translocation from intracellular stores to the plasma membrane, which leads to an enhanced uptake and β-oxidation of fatty acids. FoxO1 activation can lead to CD36/FAT translocation which results in increased fatty acid β-oxidation along with triacylglycerol accumulation [2]. This suggests a significant role of intracellular signaling in CD36/FAT function.

Long-term regulation of ACC depends on regulation of its gene expression. Several transcriptional factors can regulate ACC gene expression, including sterol regulatory element binding protein (SREBP1a and SREBP1c) and carbohydrate response element binding protein (ChREBP) [8]. SREBP is regulated by insulin, which promotes the endoplasmic reticulum SREBP1c to be cleaved and translocated to the nucleus, leading to stimulation of ACC expression. Moreover, the transcription factors peroxisome proliferator activated receptor γ coactivator 1 (PGC-1) α and β can stimulate the expression of SREBP1a and SREBP1c, both of which have a vital role in lipogenesis. ChREBP expression can be induced by high glucose concentrations, resulting in the activated ChREBP promoting the expression of ACC1 and fatty acid synthase [8,9]. Nuclear respiratory factor-1 (NRF-1) is a principal modulator of mitochondrial protein expression and mitochondrial biogenesis, both of which are important for higher mitochondrial fatty acid β-oxidation capacity [10]. For example, Adam et al. showed that NRF-1 overexpression results in inhibition of ACC2 gene promoter activity in the mammalian heart, which enhances mitochondrial fatty acid β-oxidation rates, thereby promoting overall intracellular energetic capacity [10].

Malonyl-CoA decarboxylase (MCD) is the enzyme responsible for decarboxylation of malonyl-CoA to acetyl-CoA [1]. Generally, the level of malonyl-CoA is decreased when MCD activity is increased, resulting in an elevated rate of fatty acid oxidation. It has been reported that protein kinases that phosphorylate and inhibit ACC might activate MCD [1]. However, MCD appears to be primarily regulated by transcriptional means (discussed later). Therefore, MCD and ACC appear to work in harmony to regulate the pool of malonyl-CoA that can inhibit CPT1 [1].

The CPT isoform, CPT1, resides on the inner surface of the outer mitochondrial membrane and is a major site of regulation of mitochondrial fatty acid uptake [1]. As mentioned, CPT1 is potently inhibited by malonyl-CoA, the product of ACC that binds to the cytosolic side of CPT1. Mammals express three isoforms of CPT1, which are encoded by different genes. The liver isoform (CPT1α), the muscle isoform (CPT1β), and a third isoform of CPT1 (CPT1c), which is primarily expressed in the brain and testis [9]. More specifically, the heart expresses two isoforms of CPT1, an 82 KDa (CPT1α) isoform and the predominant 88 KDa (CPT1β) isoform (that has the highest sensitivity to malonyl-CoA inhibition). Insulin and thyroid hormone can regulate the sensitivity of CPT1α in the liver; however, the CPT1β isoform is not affected [9]. Previous studies have reported that the levels of malonyl-CoA are inversely correlated with fatty acid β-oxidation rates [1]. Furthermore, studies on ACC2 knockout mice suggest two separate cellular malonyl-CoA pools, malonyl-CoA produced by ACC1 (used mainly for lipogenesis), and a cytosolic pool of malonyl-CoA produced by ACC2 involved in the regulation of CPT1 and fatty acid β-oxidation [9]. 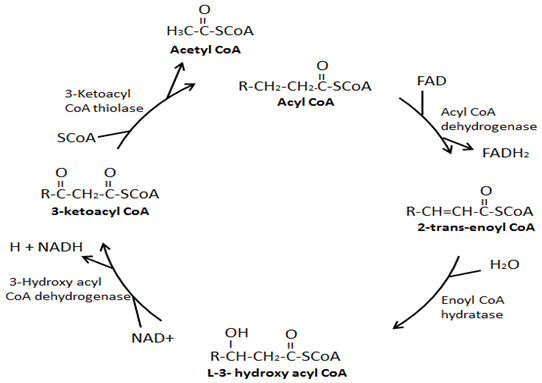 Auxiliary enzymes are required for the β-oxidation of unsaturated fatty acids and odd-chain fatty acids. Odd-numbered fatty acids are broken down by β-oxidation to acetyl-CoA molecules and propionyl-CoA. While propionyl-CoA could be metabolized through alternative pathways, it is primarily metabolized in the cell to succinyl-CoA by three enzymes (propionyl-CoA carboxylase, methylmalonyl-CoA epimerase, and methylmalonyl-CoA mutase) [11-14]. This succinyl-CoA can then enter the TCA cycle. Compared to even-numbered fatty acids, odd-numbered fatty acids occur infrequently in nature [15]. The two auxiliary enzymes, enoyl-CoA isomerase and 2,4-dienoyl-CoA reductase are necessary for the complete oxidation of unsaturated fatty acids [11]. During the β-oxidation cycle in which the cis-double bond begins on the third carbon of the acyl-CoA, the first step involves enoyl-CoA isomerase isomerizing it before enoyl-CoA hydratase, and the other two enzymes, can act on the acyl-CoA. A double bond on an even-numbered carbon requires both the auxiliary enzymes. Once the double bond is on the fourth carbon of the acyl-CoA at the beginning of a β-oxidation cycle it begins to be oxidized. Following action of acyl-CoA dehydrogenase, 2,4-dienoyl CoA reductase acts on the acyl-CoA followed by enoyl-CoA isomerase. Enoyl-CoA hydratase then acts on the acyl-CoA and the process resumes its normal order.

The activity of the enzymes of fatty acid β-oxidation is affected by the level of the products of their reactions [16]. Each of the β-oxidation enzymes is inhibited by the specific fatty acyl-CoA intermediate it produces [17]. Interestingly, 3-ketoacyl-CoA can also inhibit enoyl-CoA hydratase and acyl-CoA dehydrogenase [17]. β-Oxidation can also be allosterically regulated by the ratio of NADH/NAD+ and acetyl-CoA/CoA level. A rise in the NADH/NAD+ or acetyl-CoA/CoA ratios results in inhibition of fatty acid β-oxidation. Increases in the acetyl-CoA/CoA ratio have specifically been shown to lead to feedback inhibition of ketoacyl-CoA thiolase [16].

The genes regulated by each of the PPARs vary between tissue types. For example, skeletal muscle PPARδ, but not PPARα, upregulates expression of CPT1 [19]. PPAR isoforms are also differentially expressed between tissue types [18]. While PPARδ protein tends to be ubiquitously expressed, PPARα is predominantly expressed in highly metabolic tissues (i.e. heart, skeletal muscle, and liver) and PPARγ is predominantly expressed in tissues such as adipose tissue [18]. Until recently, PPARγ was not believed to play a significant role in regulating fatty acid β-oxidation. However, recent knockout and overexpression studies have suggested that PPARγ may have a role in regulating fatty acid β-oxidation. Over expressing PPARγ in cardiac muscle results in increased mRNA levels for fatty acid β-oxidation proteins [20].

The transcriptional co-activator PGC-1α binds to and increases the activity of PPARs and ERRα to regulate fatty acid β-oxidation [21]. PGC-1α modulates the activity of a number of transcription factors that can increase the expression of proteins involved in fatty acid β-oxidation, the TCA cycle, and the electron transport chain. For example, increasing PGC-1α protein expression induces massive mitochondrial biogenesis in skeletal muscle [21].

PGC-1α is regulated at both the gene and protein level. AMPK increases the activity of pre-existing PGC-1α protein through two proposed mechanisms. The first is by phosphorylating PGC-1α on threonine and serine residues results in an overall increase of the PGC-1α activity [22]. AMPK may also increase the activity of PGC-1α by activating sirtuin 1 (SIRT1). SIRT1 can then deacetylate PGC-1α, increasing its activity [22]. It is believed that AMPK increases PGC-1α mRNA levels by regulating the binding of transcription factors to specific sequences located in the PGC-1α gene promoter which include two MEF sites, one cAMP response element (CRE) site, and the GATA/Ebox region [22]. AMPK regulates the MEF sites by phosphorylating GEF, a protein which can mediate movement of MEF2 into the nucleus [22]. AMPK may increase binding to the CRE site by phosphorylation of cAMP-response element binding protein (CREB) 1 and other members of the CREB family that bind to CRE promoter regions [22]. As another example, free fatty acids can also regulate PGC-1α protein expression. For instance, a high-fat diet can elevate levels of PGC-1α in rat skeletal muscle [23].

Acknowledgements: GDL is a Scientist of the Alberta Heritage Foundation for Medical Research