Measuring and identifying the fatty acids in natural or synthetic mixtures is the most basic analytical procedure in the studies of oils and fats and today is carried out predominantly by gas chromatography. These procedures were largely developed during the 1950s and became commonplace when commercial GLC equipment became available. But a lot was known about fatty acid composition before this. This article is an attempt to describe the procedures used by someone who started lipid research in 1943 in the research laboratories of T.P. Hilditch in Liverpool, England and used the older procedures on a regular basis. 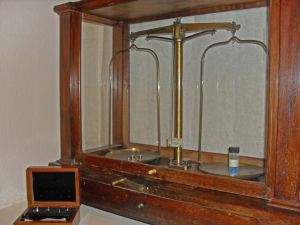 Before describing the analytical methods of that time it is necessary to give some background information on laboratory procedures at that time. Analysis was mainly gravimetric or volumetric and required the use of a balance or a pipette for accurate measurement.

At that time balances had two pans and were free swinging. The article to be weighed (such as a suitably sized capsule or boat weighed empty and with added material) was placed in one pan and metal weights were placed in the other pan to achieve a balance. The metal weights were grams or milligrams to give two decimal places. The third and fourth decimal places were obtained by placing a shaped piece of wire (called a rider) on a serrated beam. Its effective weight depended on its position along the beam. Finally the balance was allowed to swing and consecutive “swings” were counted until the swing to the right was equal to the average of the previous and following swing to the left. All this was a time-consuming operation. If it was necessary to measure (say) five samples of methyl esters then this required weighing each capsule empty and each capsule filled, i.e. ten weighings in all. We were pleased with ourselves when we found it possible to put five capsules on the pan at the same time and to reweigh as each capsule was filled. It then took only six weighings to measure five samples.

Liquids were measured with pipettes, burettes, and graduated flasks (flasks bearing a mark in the neck corresponding to an exact volume – say 500.00ml). Since many of these liquids were noxious an appropriately sized pipette was attached through a three-way tap to a water pump. Thus a 20ml pipette would deliver the same volume each time but not exactly 20.00 ml. The accurate volume was obtained using one or more blanks. Titration involved standard solutions that had to be made up in graduated flasks and then standardised by appropriate methods that at some stage required the weighing of a solid reagent.

As will be seen later the final stages of the analysis involved a lot of arithmetical calculations. At that time there were no calculators or computers. Additions and subtractions were carried out mentally on paper. Multiplication and division were carried out with a slide rule or with the use of logarithmic tables. Hilditch did not approve of slide rules (approximate answers for engineers!) so we used log' tables (numbers expressed to the power of ten). The calculations were not difficult but they were many and tedious and it was easy to make a mistake. Sometimes the error became apparent as the investigation continued sometimes it did not. In our laboratory all calculations were carried out independently by research student and by Professor with final agreement required between the two operators.

Apart from one procedure that I will detail later we made no use of any spectroscopic equipment. There were procedures for obtaining visible, ultraviolet, and infrared spectra, but these were not considered much use for lipid analysis. In any case the equipment was fairly primitive and existed only in specialist laboratories. Lipid analysis up to about the 1950s was carried out without chromatography and without spectroscopy.

This was the background in which fatty acid analysis was conducted in the Liverpool laboratories during the tenure of T.P. Hilditch (1926-1951). What about the analytical procedures themselves?

Methods of Analysis – a Task for about 15 Working Days

Starting with a mixture of fatty acids or their methyl esters (generally at least 100g) these were separated into a large number of fractions (say 50 or more) each of which was simple enough in composition to be analysed. Two kinds of separation were employed. The first depended on solubility related to unsaturation and provided concentrates of saturated, monounsaturated, and polyunsaturated acids. Each of these fractions was then converted to methyl esters and separated according to chain length by fractional distillation under reduced pressure. We then measured three properties of each of these final fractions (each about 3g): the weight, the iodine value, and the saponification equivalent and used these parameters to calculate the composition of each fraction. Eventually these could be summed to determine the composition of the original oil. For some fractions it was necessary to recover acids free of unsaponifiable material and to re-determine the iodine value and saponification equivalent.

Iodine values were determined by reacting acids or esters (usually 100-300mg) with excess of iodine monochloride dissolved in acetic acid. When reaction was complete (30-60 min) the excess of halogenating agent was reacted with aqueous potassium iodide solution. Free iodine was liberated and this was measured volumetrically with standardised sodium thiosulfate solution. The iodine monochloride had to be made by dissolving equimolar amounts of iodine trichloride and iodine in acetic acid. (An article Arthur von Hübl and the Iodine Value is also available on this website). Nowadays, it is interesting to note that to save time and avoid the use of noxious reagents, an iodine value, if required, is calculated from the fatty acid composition determined chromatographically.

To determine the saponification equivalent about 3.0 g of accurately weighed methyl esters (or free acids) were boiled with excess of ethanolic potassium hydroxide. When reaction was complete unreacted alkali was measured by titration with standardised aqueous sulphuric acid. The lipid analyst of that time had to master these analytical techniques over a few days or weeks before progress could be made. With this facility fatty acid analysis could be undertaken.

Another useful procedure was developed during the 1940s. When the common methylene-interrupted polyunsaturated fatty acids such as linoleic and linolenic are heated with alkali double bond movement leads to acids with conjugated unsaturation which can be measured by ultraviolet absorption. Linoleic acid gives dienes (Δ9,11 and Δ10,12) which absorb at 234 nm: linolenic acid gives a more complex mixture of dienes and of trienes, the latter absorbing at 268 nm. These changes are effected by heating with KOH in ethylene glycol and the results were compared with values obtained with pure starting materials (difficult to obtain at that time) under the same conditions. Different laboratories used slightly different conditions. In Hilditch's laboratory we used a reaction at 170°C for 15 minutes for linolenic acid and a reaction at 180°C for linoleic acid. When linolenic acid was present the diene absorption had to be adjusted for that resulting from this acid before the level of linoleic acid was calculated.

The ultraviolet measurement had to be made in another laboratory (Biochemistry). At first it involved a ‘rotating shutter’ and collecting results on a photographic plate that had to be ‘developed’ and ‘read’. Later the biochemistry department (for its wartime assessment of added vitamin A levels in margarine) was assigned one of the first Beckmann spectrophotometers, which provided the levels of absorption at 234 and 268 nm simply by turning a few knobs.

Component acid analysis was conducted in three stages and required around 15 working days. 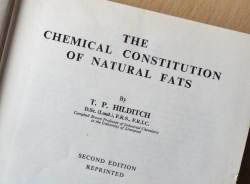 This worked satisfactorily with oils containing only monoene and diene acids but additional procedures were necessary when the oil also contained linolenic acid. An older method involving reaction with thiocyanogen (CSN)2 was replaced by a more convenient method using alkali-isomerisation. If an oil contained an acid of novel structure then additional procedures of isolation and degradation were required (i.e. the methods traditionally used by organic chemists at that time).

Another separation procedure developed during the 1940s was crystallisation of the acids themselves from organic solvents (methanol, ether, petroleum ether, or acetone) at temperatures down to -70°C using solid carbon dioxide as an external refrigerant. The method could be varied in many ways through the selection of solvent and of crystallising temperature. Generally three fractions were obtained rich in saturated, monounsaturated, and polyunsaturated acids, respectively, as in the example of groundnut oil set out in Table 2.

In the next stage, each sub-fraction of separated acids was converted to methyl esters and then separated according to boiling point (molecular weight) by distillation under reduced pressure through a packed column. The column was fitted with a Perkin triangle which allows collection tubes to be removed without losing the vacuum in the distillation column. The number of fractions (and the distillation residue) would be anything between 5 and 20 for each distillation. Each distilled fraction was weighed and its iodine value and saponification equivalent measured.

An example of the calculations required is given for a fraction of 3.95g, I.V. 10.2, and S.E. 295.4. The saponifcation equivalent (295.4) lies between those for methyl palmitate (270.4) and methyl stearate (298.5) and the fraction is considered to be a mixture of esters of C16 and C18 acids on the assumption that the fractionation column can separate esters of C14 acids from esters of C18 acids and esters of C16 from C20 acids. The iodine value indicates the presence of an unsaturated component, which is considered to be methyl oleate.

This can be calculated from the equation:

The remainder of the fraction is calculated as a mixture of methyl palmitate (P) and methyl stearate (St) by solving simultaneous equations based on (i) weight and (ii) saponification equivalent:

Finally, the structures of the major acids had to be confirmed by the measurement of a m.p. and a mixed m.p. For each of these a distilled ester fraction rich in the acid to be identified was selected. Saturated acids were crystallised, oleic acid was oxidised with dilute alkaline potassium permanganate to erythro-9,10-dihydroxystearic acid, linoleic was brominated to give a 9,10,12,13-tetrabromostearic acid, and linolenic to a 9,10,12,13,15,16-hexabromostearic acid. When any of these checks failed then a fatty acid of novel structure was present and a more complete investigation was needed.

Full details of these procedures are reported by Hilditch, particularly in the third edition of his book ‘The Chemical Constitution of Natural Fats’ (Chapman and Hall, London) (1956). Information is also available in 'Lipid analysis – a brief historical survey' by F.D. Gunstone, in "New Trends in lipid and Lipoprotein Analysis", pp. 1-9 (ed. J.-L. Sebedio and E.G. Perkins, AOCS Press, Champaign, Illinois, USA) (1995).